Hennessy Gold Cup no more as Ladbrokes take over 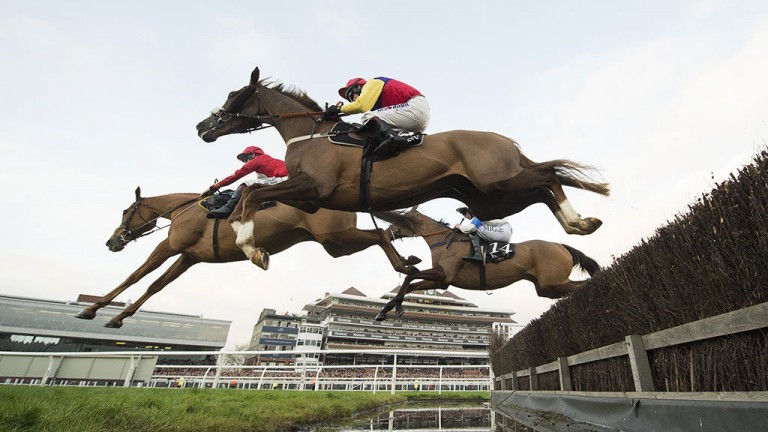 Native River won the Hennessy this season, a race that will now be sponsored by Ladbrokes
Edward Whitaker (racingpost.com/photos)
1 of 1
By Bill Barber 7:10PM, JAN 23 2017

Ladbrokes have been confirmed as the sponsor of Newbury's flagship jumps meeting including the former Hennessy Gold Cup, with the course's chairman citing the government's plans for levy replacement as justification for breaking with the sport's authorised betting partner policy.

The bookmaker will sponsor all but one of the 14 races over the two-day meeting on December 1 and 2.

It had been rumoured for some time that Ladbrokes were in talks to become the new backer of the race best known as simply the Hennessy for the last 60 years, although that would have meant Newbury not following the ABP scheme under which new commercial deals could only be done with bookmakers who made a contribution to the sport from their offshore income from racing.

However, the government's announcement this month that it intended to press on with levy replacement from April 1 meant Newbury was happy to do a deal with Ladbrokes, who no longer sponsor events like the St Leger and Stayers' Hurdle because of their refusal to sign up as an ABP.

Newbury chairman Dominic Burke said: "The Newbury board's decision to partner with Ladbrokes as the new sponsor for this prestigious meeting was made in light of the government's commitment to replace the existing levy scheme from April, 2017.

"Given the government's position, our board felt that it could agree future sponsorship arrangements with any betting operator for race meetings taking place after that April date.

"We are looking forward enormously to working with the Ladbrokes team on this exciting new partnership, especially given their proven track record of success in elevating the profile of the major races that they have supported over the years."

Asked if he expected the course to be criticised for its stance, Newbury head of communications Andy Clifton said the ABP policy had never been intended to be mandatory.

He added: "The ABP policy was meant to be a carrot rather than a stick in the sense that betting operators who signed up to the ABP policy would get benefits from doing that.

"It has never been the intention that commercial bodies whether they be racecourses or anybody else are banned from doing deals with betting operators who haven't signed up to the ABP system."

Ladbrokes chief executive Jim Mullen said he was proud his firm had reached a deal with Newbury.

He added: "Horseracing is a vital part of the heritage of our business, and we are passionate about maintaining our support of the sport.

"We have committed to work in partnership with Newbury racecourse to build the two days of this fixture into one of the most compelling attractions not just in the racing calendar, but in that of sport as a whole."

The BHA has said the ABP policy will continue until funding starts to flow to the sport from levy replacement.

Reacting to Newbury's announcement, BHA head of media Robin Mounsey said: "Government has recently announced that it will deliver the levy replacement from April 2017, thus closing the loophole which has enabled some bookmakers to avoid making a return to British racing from all the bets they accept on our sport.

"In the meantime, the payments that ABPs continue to make remain an extremely important source of funding for racing, without which we would have needed to reduce expenditure with inevitable consequences for the level of prize money. We are grateful to them.

"The sponsorship deal that Newbury has announced today once again reinforces our view that horseracing remains very attractive to bookmakers. People who bet on racing are extremely valuable to betting operators, delivering significant value from their wider betting activities."

Newbury said full details of the exact race programme, race titles and prize money by race at the meeting would be published later in the year.

The one race which will not be sponsored by Ladbrokes is the Sir Peter O'Sullevan Handicap Chase on the Saturday, which will continue to be supported by friends of the revered commentator and journalist.

It has been the worst kept secret in racing for some time but at last we have had it confirmed Ladbrokes are to take over sponsorship of Newbury's highlight of the year from Hennessy.

Whether by accident or design the news Newbury has signed up Ladbrokes, who have refused to join British racing's controversial authorised betting partner scheme, comes a little over a week after the government confirmed it planned to replace the levy from April 1.

When the money starts flowing from the new system the ABP policy will be consigned to history.

While Newbury has not entered into any new commercial relationships since the policy was implemented, the course's lack of enthusiasm for the scheme has been well known.

Those who have been fervent supporters of ABP will be disappointed with Newbury's decision but they will not be surprised. There will also be some from the ranks of racing's professionals who criticise Newbury but they should perhaps look to some of their own number who have been happy to work for non-ABPs.

Now Newbury has broken rank, it may well be that other courses follow suit. However, there will be some interesting conversations to be had if anything were to delay levy replacement.