Talk of the Tracks ASCOT 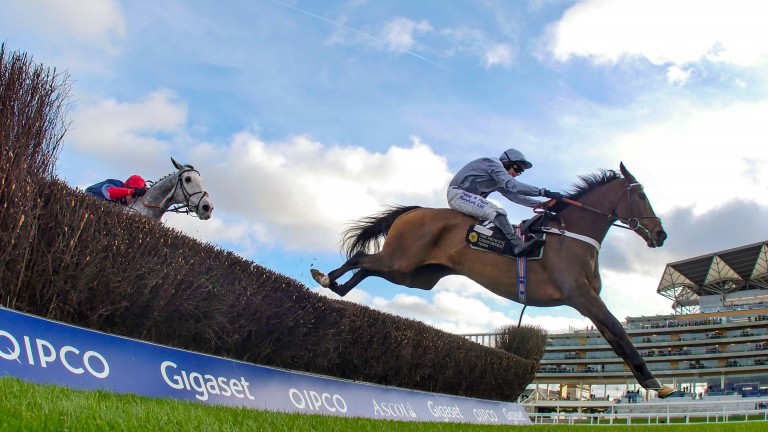 Different Gravey and David Bass clear the last ahead of Brother Tedd
Mark Cranham
1 of 1
By Graham Dench 6:01PM, NOV 19 2016

Nobody could suggest yet that either might ever fill the huge void left by the retirement of Sprinter Sacre and the death of Simonsig, but the pair, both of whom run for the Kelvin Hughes family, plainly have considerable potential.

Different Gravey made a great start to his chasing career when he won a hot little beginners' race by six lengths from Brother Tedd. A classy hurdler who had hacked up by 16 lengths off 149 in a handicap at Ascot in February, he looked for a moment as if he had a race on his hands between the last two fences, but he was well on top on the run-in.

Jockey David Bass described it as "the ideal start" and added: "He jumped well in the main and he quickened up. He's still a big baby and there's lot of improvement in him. That was just greenness between the last two."

Toby Lawes, representing the absent trainer added: "He'll be a three-miler, but he's not short of speed so there are plenty of options for the future. We had him pencilled in last year as an RSA type but we stuck to hurdles as we got a bit behind time. He's just a natural and he's built for this."

Paddy Power make the six-year-old a 14-1 chance for the RSA Chase.

Thomas Campbell took an equally competitive intermediate hurdle from Criq Rock. Barry Geraghty rode the four-year-old and reported: "I'd say the penny hasn't quite dropped yet. He's a bit of a playboy."

Lawes added: "He's a very tough little horse and there's hopefully plenty of progression in him as he's still learning. His jumping was good, but there's still improvement to come. That was a decent little race and he's a horse we can have a lot of fun with."

The colours carried successfully on the Ted Walsh-trained Commanche Court in the 1997 Triumph Hurdle and the 2000 Irish Grand National made a first appearance in some years when Kimberlite Candy outstayed Secret Investor to win the maiden hurdle by seven lengths.

Tom Lacey trains the former point-to-point winner for Dermot Desmond and reckons he is the owner's first horse since 2006. He added: "Kimberlite Candy is a super horse. He's a dour stayer and will be given plenty of time to fill his frame. We won't be targeting any big races. We'll give him time to mature and chasing will be the end game."

Present Man unseated his rider when fancied for the Wincanton chase his owners sponsor, but there was compensation when a bold round of jumping and a gutsy finish effort saw him home by a neck from Go Conquer in the 2m5f handicap chase.

Harry Derham, Paul Nicholls' assistant, said: "This was the plan after what happened in the Badger Ales. He has looked tricky, so fair play to Jack (Sherwood) for getting a good tune out of him."

An afternoon that threatened to be dominated by Henderson and Nicholls ended with Welsh-trained winners of the last two handicaps.

Novice Minella Daddy overcame his inexperience to win the 3m chase in style for Peter and Sean Bowen, and summer jumps winner Eddiemaurice bagged a nice hurdle for John Flint and Aidan Coleman in a tight finish.

Paul Nicholls and Nicky Henderson should have sent their assistants to Haydock. It was a lot nicer at Ascot.

FIRST PUBLISHED 7:01PM, NOV 18 2016
He jumped well in the main and he quickened up. He's still a big baby and there's lot of improvement in him