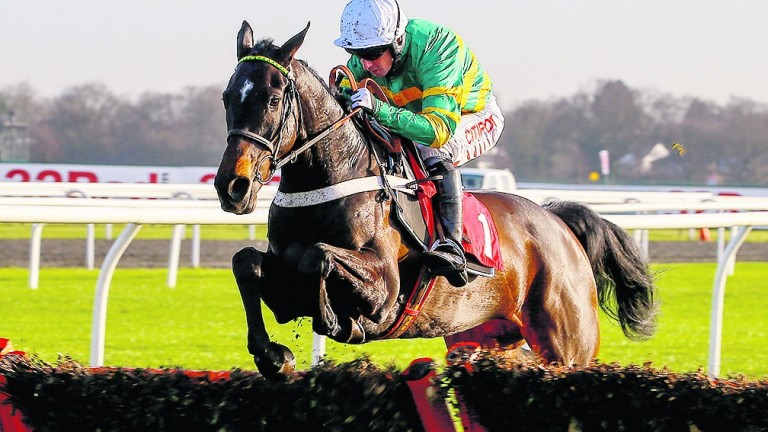 Charli Parcs: makes his debut for Aidan Howard at Leopardstown
Mark Cranham
1 of 1
By Lee Mottershead 11:40AM, JAN 28 2017

JP McManus has a plethora of high-class juvenile hurdlers in Ireland but two of his British four-year-olds sit at the head of the JCB Triumph Hurdle betting. Although both are declared for Cheltenham's opener we shouldn't be expecting an early clash.

The Philip Hobbs-trained Triumph ante-post favourite Defi Du Seuil, twice a winner at Cheltenham already, is expected to make way for Nicky Henderson's Charli Parcs, who created a massive impression when scoring on his British debut at Kempton.

"At the moment Charli Parcs is a definite runner," said McManus's racing manager Frank Berry. "Defi would only run if the ground becomes very heavy, in which case it's possible Charli Parcs wouldn't run. Nothing is set in stone, though."

What is clear is the esteem in which Charli Parcs, generally a 7-1 shot for the Triumph, is held by Henderson.

"I think he's very nice and I wouldn't actually be frightened if the ground went very soft as he won on it at Enghien.

"He's a pacey horse so we know he would be good back at Kempton in an Adonis, but I'm very keen to see him running at Cheltenham."

While Henderson has won three of the last four runnings of this JCB-backed Finesse Hurdle, Alan King has been successful four times in the last ten years. On this occasion he saddles Rainbow Dreamer.

King believes his contender is "jumping up two grades". He said: "He won twice at Fontwell in December, battling back after fluffing his lines at the last after Christmas, but he'll need a career-best in what looks a hot race."

France won this race in 2001 with the top-class Jair Du Cochet, and an intriguing runner having his first outing in Britain is Early Du Lemo, who was victorious in a hurdle at Nantes in November and has since joined Gary Moore.

"He's a horse we like a lot," said Moore. "He has been ready to run for a while and I'll be disappointed if he doesn't give a good account of himself."

While Taunton handicap winner Jazzy was installed at 150-1 by one bookmaker on Friday, the odds about Newbury second Siruh Du Lac will be smaller, even though he goes into the race an outsider.

"I really like him," said rider Lizzie Kelly. "His first start for us was pretty impressive, as for a horse having only his second race he was so professional.

"It's a hot contest, but he deserves to take his chance and the run should give us a benchmark."

FIRST PUBLISHED 6:00PM, JAN 27 2017
He is a pacey horse, so we know he would be good back at Kempton in an Adonis, but I'm very keen to see him running at Cheltenham

JP McManus: if I lose I don't have a bet for two weeks - it doesn't bother me Tributes paid to Flagship Uberalles as Champion Chase hero dies aged 26