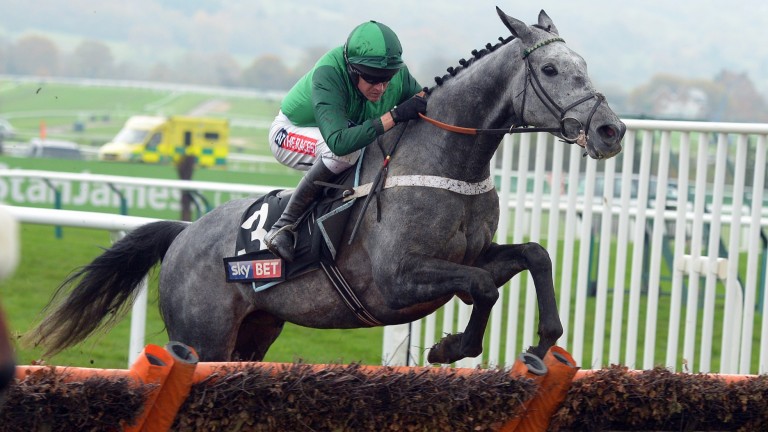 Vyta Du Roc goes on trial over hurdles at Aintree today for the Hennessy in three weeks time
1 of 1
By Bruce Jackson 6:00PM, NOV 4 2016

Channel 4 could have struck lucky for the second year running in televising the 2m4f hurdle at Aintree on Saturday.

Last year, the Betfred Supports The BTRC Hurdle featured an intriguing clash between stablemates Bobs Worth, the 2012 Hennessy and 2013 Gold Cup winner, and Simonsig, the dual Cheltenham Festival winner of the Neptune and Racing Post Arkle.

Their trainer Nicky Henderson runs only Vyta Du Roc this time, but in taking on Un Temps Pour Tout, it tees up an unlikely Hennessy Gold Cup trial.

Henderson said: "I'm desperate to give him a run as the Hennessy is where we're trying to go. He's in very good shape and he was a very effective hurdler over two and a half miles.

"It's a hot race but we won it last year with Bobs Worth so maybe he can do the same."

Un Temps Pour Tout won the Ultima Handicap Chase at Cheltenham and in doing so proved himself to be a top novice, trainer David Pipe said: "He was not at his best at Aintree the following month and has had a well-deserved break since.

"This is a prep before going to Haydock for the Betfair Chase or the Hennessy Gold Cup at Newbury – the latter would appeal as a more likely target."

Pipe will sadly not be targeting the promising King's Socks – who had been a leading fancy for next Saturday's BetVictor Gold Cup – at anything this season, revealing he will miss the campaign through injury.

Zarkandar's trainer Paul Nicholls said: "I'll check the ground to make sure it's safe, but there's rain about and as long as there's a nice cut in it he'll run as he needs to start off somewhere."

Half an hour later, the Channel 4 cameras will be trained on former Nicholls' star Mr Mole as he makes his debut under top-weight for trainer Ben Haslam.

"I'm under no illusions he's a quirky character but he's been a gent since getting here in August," reported Haslam.

"It's great to be sent a horse of this calibre," said Haslam, who has trained 13 winners for Mr Mole's owner JP McManus from 13 horses sent to him.

"It's a tough task and we could do with a little more rain, and if the ground dried out he wouldn't run – he's had a few little issues over the years and I'm mindful of that."

While Fifa has banned footballers wearing poppies at Wembley next week – albeit one set to be defied – Aintree is giving jockeys black armbands with a poppy displayed to wear in remembrance at Saturday's meeting.

FIRST PUBLISHED 6:00PM, NOV 4 2016
I am desperate to give him a run as the Hennessy is where we are trying to go. He is in very good shape and he was a very effective hurdler over two and a half miles