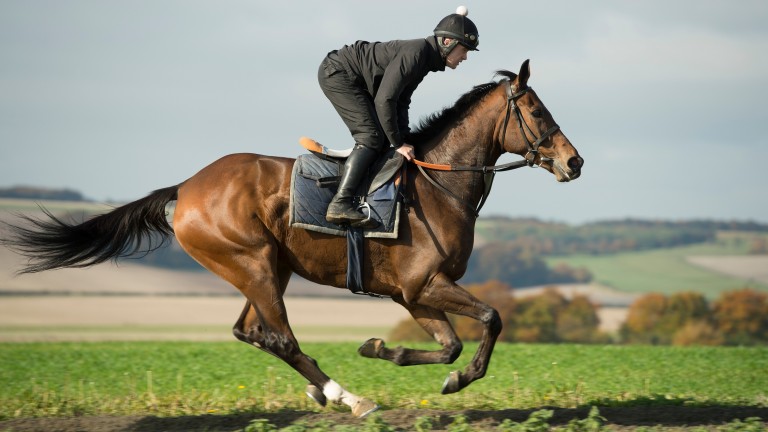 Nicky Henderson had no wish to take on Thistlecrack with one of his most exciting novices, so where else could he run a horse called Different Gravey than at a track where he has a record of nine winners from ten runners in beginners' chases since 2006?

Different Gravey took on Thistlecrack in the Liverpool Stayers' Hurdle at Aintree in April, where he finished a disappointing fifth of six, but on his previous start at Ascot he had been an impressive 16-length winner of a handicap hurdle on his first run in almost a year.

Winner of four of his six runs over hurdles, Different Gravey faces three opponents in the Prince's Countryside Fund Beginners' Chase as he makes the switch to chasing, a discipline at which he is tipped to take high rank.

"Hopefully he has a big future over fences," said Henderson. "He was a very exciting novice hurdler but unfortunately picked up a hind-leg injury when winning at Ayr, so he didn't reappear last season until February when he put up a stunning performance to win a very competitive Ascot handicap by miles.

"We missed Cheltenham and waited for the Stayers' Hurdle at Aintree, but that was a big disappointment and we put him away for the season. The real excitement now begins. He has always wanted to be a steeplechaser. Now he's going to become one."

The race was won a year ago by Thomas Brown, whose trainer Harry Fry now gives a start to Hell's Kitchen, a JP McManus-owned five-year-old who has had three runs over hurdles.

"He's very much a chaser, a lovely big horse," said Fry. "It has always been the plan to go chasing sooner rather than later and this looks an ideal trip, ground and course to start him over. He jumped his hurdles like fences last year, so we haven't wasted any time in getting on with it."

Qualando, without a win since landing the 2015 Fred Winter Juvenile Handicap Hurdle at Cheltenham, made an encouraging start to chasing when third behind Shantou Village at Cheltenham.

Trainer Paul Nicholls said: "Qualando ran nicely on his first run over fences at Cheltenham and he would have a chance in this race."

Brother Tedd, a place behind Qualando at Cheltenham, has his third start over fences and trainer Philip Hobbs said: "Up to now he has not quite run up to his hurdles form, although he was better at Newton Abbot. His Cheltenham run was below par but there was no obvious reason."

FIRST PUBLISHED 6:00PM, NOV 17 2016
The real excitement now begins. He has always wanted to be a steeplechaser. Now he's going to become one

More than £10,000 traded at 1.01 before Versatility unseats rider after the last Superstar Honeysuckle out to cap perfect season with another Grade 1 masterclass Blackmore has chance to cap her sensational spring on Honeysuckle The season ends for the sport's new champions with the day that had everything