Henderson hope Rather Be backed into favourite for BetVictor Gold Cup 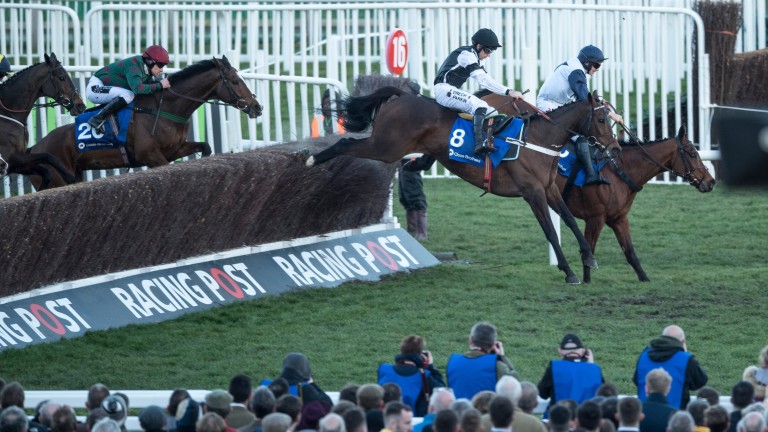 Rather Be (second right) jumps the last in the Close Brothers Handicap Chase at Cheltenham with winner Mister Whitaker (green) in hot pursuit
Edward Whitaker
1 of 1
By Bruce Jackson UPDATED 8:03PM, NOV 12 2018

A big swing in the weights, favourable forecast good ground and in-form trainer Nicky Henderson putting all his BetVictor Gold Cup eggs into one basket have combined to thrust Rather Be to the top of the market for Saturday's showpiece at Cheltenham.

Rather Be was on the wrong end of a head verdict after a pulsating finish to the Close Brothers Novices' Handicap Chase at the Cheltenham Festival last season, but he has a 9lb turnaround in the weights with Mister Whitaker this weekend.

And that is just one factor in favour of the horse punters on Monday made the new big-race favourite, into a general best-priced 6-1 (from 10).

Speaking at Kempton on Monday, where he enjoyed a treble, Henderson said: "He's taken a bit of time to come to hand this season but has just started to bloom.

"He's improved each year so let's hope he can keep that up. His run in the Close Brothers was very good, the BetVictor is his ideal trip, and he's 9lb better off with Mister Whitaker."

Henderson, whose stable tour in Monday's Racing Post highlighted his awesome array of talent in pursuit of a third trainers' title on the bounce, did have four horses in the BetVictor Gold Cup but whittled that down to just one at Monday's forfeit stage.

Charlie McCann of BetVictor said: "All the money has been for Rather Be since the 28 horses who have stood their ground were revealed.

"It looks like punters have taken it to heart that Henderson has made four into one after having had four entries in the race, and with the forecast good ground being in Rather Be's favour."

Coral cut Rather Be to 6-1 (from 10) and spokesman David Stevens said: "Mister Whitaker took the spoils at the festival but punters seem confident a fair shift in the weights in favour of Rather Be can see him gain revenge."

Mister Whitaker, available at 7-1 with William Hill for the £160,000 Grade 3 handicap chase, is one of just five jumpers trained by Mick Channon.

His son and assistant Jack said on Monday: "Mister Whitaker's strength is his jumping – he saves so much ground jumping his fences economically.

"We're into unknown territory but he's improving and we hope he keeps on improving.

Cheltenham has had 30mm of rain since last Wednesday, leaving the ground good to soft.

Clerk of the course Simon Claisse said on Monday: "It hadn't rained since the first meeting until Wednesday and was getting to good to firm.

"Minimal rain was forecast today and tomorrow, and then it's forecast to be dry and getting warmer up to and right through the meeting.

"Expectations are the ground will be good, possibly good to soft in places for the start of the three days."

He continued: "On the cross-country course it is good, good to firm in places but we have started watering it for a third time and expect to knock out the good to firm."

The troublesome bend away from the stands on the run-in, which witnessed two horses run out with winning chances at last month's meeting, has been looked at again.

Claisse said: "Those two events remain inexplicable but we used 34 yards of rail in nine pieces with nine pins the next day, which worked, but we've worked since to find something safer for the staff as well.

"There will be a 36-yard length of rail with legs included and nine or ten people will move it into place. In rehearsal they have it down to 45 seconds, when the horses will be still at the top of the back straight."

FIRST PUBLISHED 7:31PM, NOV 12 2018
He had taken a bit of time to come to hand this year but he has just started to bloom

'I'm sure Champ is a Gold Cup horse - but we might have another one as well' 'He's one of the most exciting prospects we've had for a long time' 'The Tingle Creek is the first aim and the hope is that he's our next superstar' What's on this week: Cheltenham returns before Derby favourite runs at Doncaster 'It's a meeting I've always liked' - Elliott to send strong squad to Cheltenham There's a buzz about the Flat in this jumps heartland - just ask Nicky Henderson