Nicholls: Henderson a bigger danger than everybody thinks 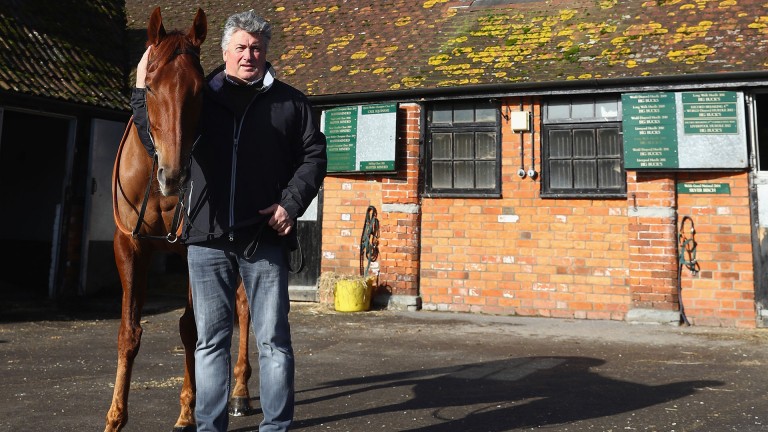 Paul Nicholls poses alongside Movewiththetimes, one of his two hopes for the Betfair Hurdle
Michael Steele/Getty Images
1 of 1
By James Burn 2:20PM, FEB 8 2017

Paul Nicholls, who gives Movewiththetimes and Zubayr a fighting chance of landing Saturday’s Betfair Hurdle at Newbury, has identified Nicky Henderson as a bigger obstacle to him capturing an 11th trainers’ title than West Country rival Colin Tizzard.

Victory in Britain’s richest handicap hurdle would boost Nicholls’ lead at the head of the championship race by £88,272, and Betfair Sportsbook make Movewiththetimes 5-1 joint-favourite, with Zubayr 12-1.

Nicholls would dearly welcome success in the contest he landed with Zarkandar in 2012, especially as his Cheltenham challenge will lack a big gun in the mould of former Ditcheat superstars Kauto Star or Denman.

“Every season is a transitional one now since those good horses,” said Nicholls on Tuesday as he played host to the media.

“We’re £300,000 in front of Colin, but one big race at Cheltenham and that’s wiped out. But I think Nicky is a bigger danger than everybody thinks.

“Nicky’s got an awesome team to run if you think of Altior and his Champion Hurdle horses. I think Colin’s relying on one race [the Gold Cup] and those good horses performing."

Nicholls, who got the better of a ding-dong tussle with Willie Mullins last term, continued: “We’re not in any different position to last season – I didn’t have anything to run in the big races. This season isn’t all about Cheltenham – although that does help – but races like Saturday are awesome and worth winning.

Nicholls' 114 winners have come from 434 runners, figures that compare favourably to this stage last season, when he had saddled 67 winners from 330 runners.

On the Betfair Hurdle, he said: "I don’t know who'll ride Movewiththetimes, but I suspect it’ll be Barry [Geraghty]. They’ll decide later in the week and I know he’s always liked the horse, while I suspect Nick [Scholfield] will ride Zubayr and Sam [Twiston-Davies] will probably ride his dad’s horse [Ballyandy], but it hasn’t really been discussed.

“I know Sam would love to ride Movewiththetimes if he could but I think Barry will be on it.”

Focusing on Movewiththetimes, Nicholls said: “He's really nice. He’s a big, strong horse who’ll make a lovely chaser in time. He’s got a mark of 136 and who knows if that’s good, bad or indifferent, but if you’ve got a novice on a mark like that you hope they’ll progress.

“It’s a hard job running in a race like this with a horse like him who might lack experience. It’s a good, fast, furious gallop so they have to be at their best jumping-wise.

"But with a horse like this who knows where he might end up? One thing for sure is he’ll be a really smart chaser in time. We like him a lot and he’s been well prepared along with Zubayr for the weekend.”

Nicholls added: “Zubayr is not unlike Zarkandar in a lot of ways. He surprised us last year by winning the Adonis. He was dropped right out, they went quick and he stayed on strongly. We haven’t ridden him like that since and I think it’s what we might have to do on Saturday. He’s crying out for a real fast-run handicap where we can drop him in.

“I don’t think he was anywhere near his best at Sandown last time and he's had a nice break since. I think he'll be better in the spring. He did a nice piece of work with Movewiththetimes last week and you could hardly split them.

"I think the best is yet to come. He probably does want two and a half miles, but on soft ground it might just suit him on Saturday, and I know he’s a lot better now than when he went to Sandown."

FIRST PUBLISHED 5:20PM, FEB 7 2017
He's got an awesome team to run if you think of Altior and his Champion Hurdle horses