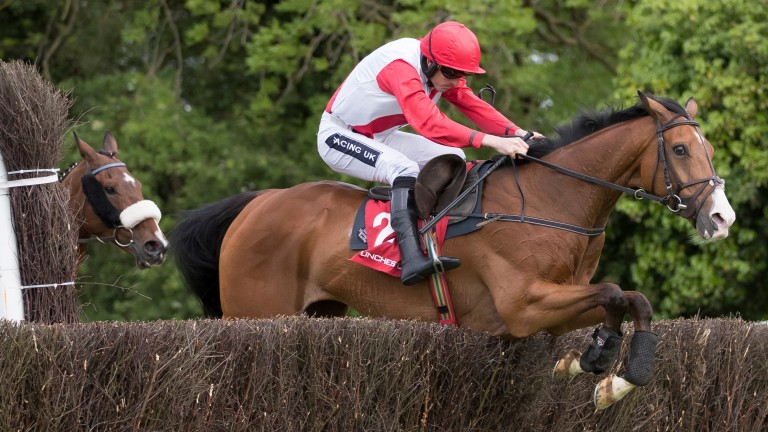 Sandymount Duke: his efficient jumping will be a big asset in the Galway Plate
Patrick McCann
1 of 1
By David Jennings 6:00PM, JUN 22 2017

Hello Sweetie has taken time to bloom. It was a dozen outings before she finally got her head in front and she was beaten at odds of 2-1 or shorter three times during that barren spell, but she has been blossoming over fences of late and arrives here in search of a hat-trick following a pair of wins at Ballinrobe.

Both of those recent wins were achieved over 2m1f so she has three extra furlongs to travel this time, while her mark has soared from 109 at the start of May to 124 now. This is her toughest test to date but her trainer Pat Collins feels she is ready for the challenge.

"She's in great form and I do think she will stay the trip. We are going there in the hope that she will run another big race for us," Collins said.

The question on everyone's lip is where did this improvement in Hello Sweetie come from?

"She is settling better now," Collins explains. "Running in better races, where they go a stride quicker, allows her to settle in behind and she does not have to make the running. She seems to be enjoying herself now and her confidence is high. It would be brilliant if she could keep up this winning run."

Henry de Bromhead and Noel Meade have farmed this race in recent years with the pair having shared the last four runnings between them. Elegant Statesman won it for the last two years for De Bromhead, while Meade was successful with Fisher Bridge in 2014 and Johannisberger in 2013.

De Bromhead relies upon topweight Devils Bride this time and has booked Dylan Robinson to take 5lb off. Meade runs Net D'Ecosse, who was agonisingly denied by a short head on his last visit to Down Royal in early May.

The likely favourite is Sandymount Duke from the Jessica Harrington stable. He beat some top-notch rivals last time at Punchestown, including Hidden Cyclone, and has gone up 16lb to a mark of 153.