'He'll never recover from that!' - the heroics of Killultagh Vic and Ruby Walsh

Ruby Walsh astonishingly clings on to Killultagh Vic in the Grade 2 novice chase in 2016
Alain Barr (racingpost.com/photos)
1 of 1
By Matt Rennie UPDATED 9:42AM, JUL 23 2021

In a new series by the Racing Post, we take a look back at some of the wackiest races ever run, this time recalling Killultagh Vic's unbelievable victory at Leopardstown in January 2016.

The Willie Mullins-trained Killultagh Vic came into the race as one of the most exciting novice chasers in training. The son of Old Vic had already impressed over hurdles the previous season, downing Thistlecrack in the 3m Grade 1 novice at Punchestown after winning the Martin Pipe at the Cheltenham Festival.

He had made the perfect start to his life over fences with an easy 15-length success at Fairyhouse and was sent off at prohibitive odds of 2-7 to make light work of his inferior opposition here.

Despite some scratchy leaps in the early stages, it was seemingly all going to plan for Killultagh Vic and a motionless Ruby Walsh. By the halfway stage, the pair were already six lengths clear of their rivals.

That lead remained the same as they took the third- and second-last fences with no issues at all, and turning into the home straight it looked to be routine as he cantered over his rivals.

All he needed to do was take the last fence without error and storm to a wide-margin victory.

At first, it looked as if Killultagh Vic had negotiated the last fence successfully, but he pitched on landing and slithered across the grass, coming to a complete standstill.

Walsh somehow managed to keep the partnership intact but had lost his irons and all chance of victory, so much so that commentator Dessie Scahill uttered the words, "He'll never recover from that!".

Or so they thought.

As Blair Perrone and Lord Scoundrel passed Killultagh Vic, Walsh and his willing partner began to get some momentum up but still had around four lengths to find with less than a furlong to go.

However, under a classic, tenacious Walsh drive (minus the irons) he found a new lease of life and motored back on to the heels of his rivals.

As the inside rail opened up, Killultagh Vic surged home in the final 50 yards to overhaul his rivals and land the spoils by three-quarters of a length.

Scahill had gone from writing Killultagh Vic off to exclaiming "he's done it!".

While it was only a small-runner Grade 2, the legendary jockey fist-pumped the air like it was a championship win before eventually pulling his mount up. 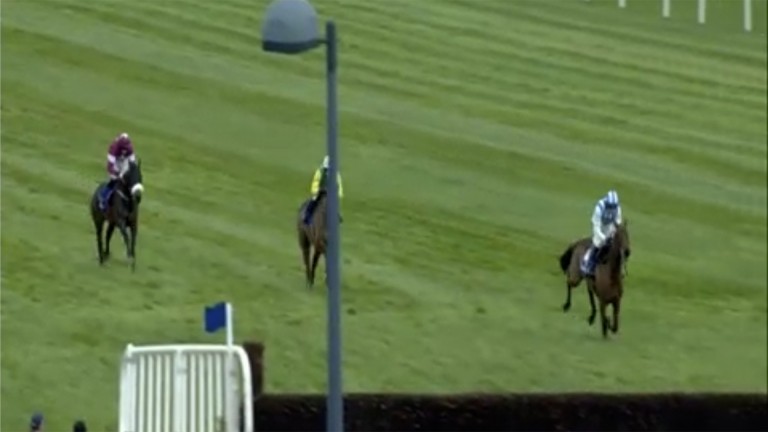 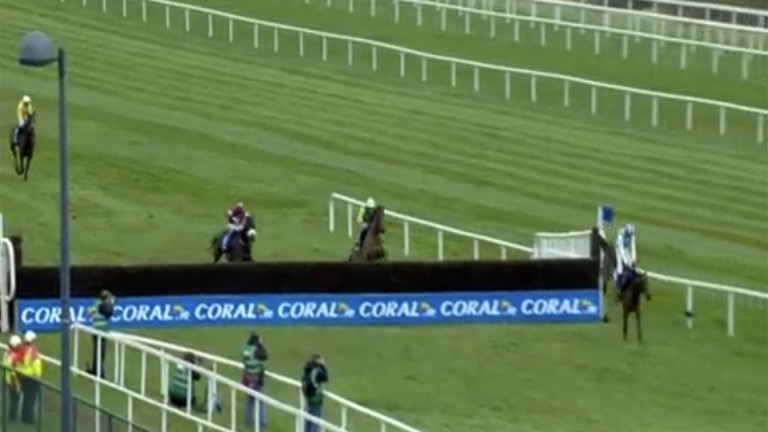 They clear the last well but appear to land steeply, with the pair soon to perform heroics 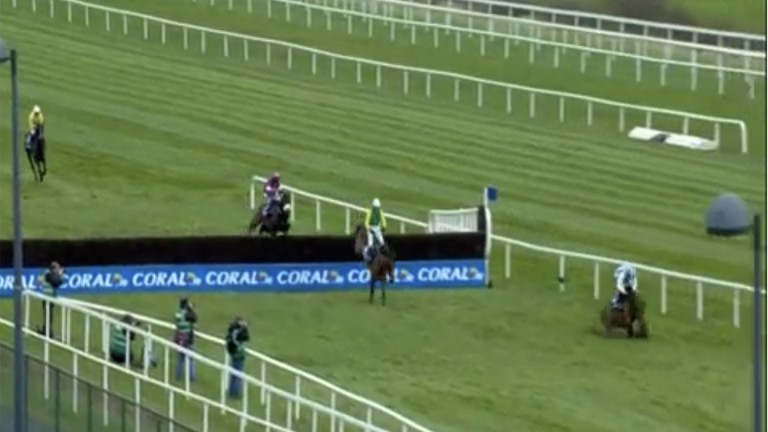 Killultagh Vic slithers on landing upon jumping the last, with Walsh managing to sit tight 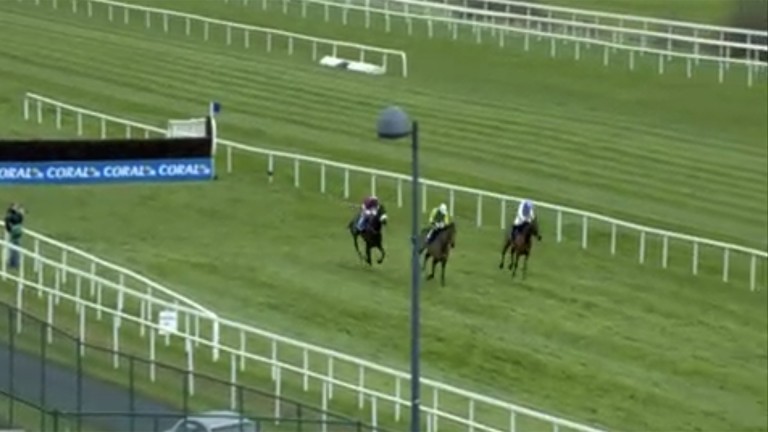 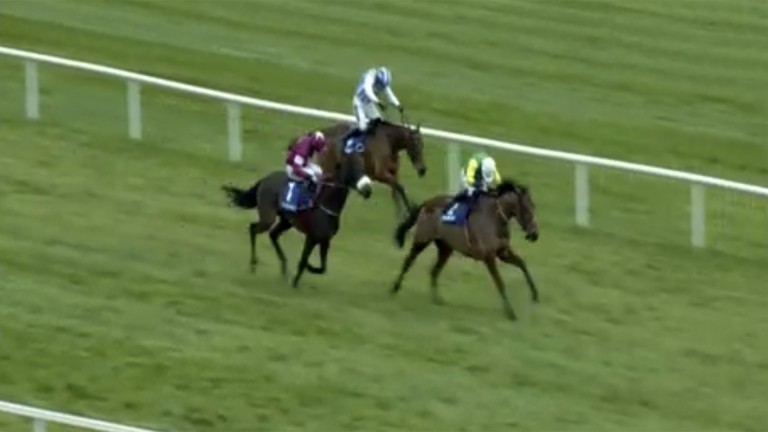 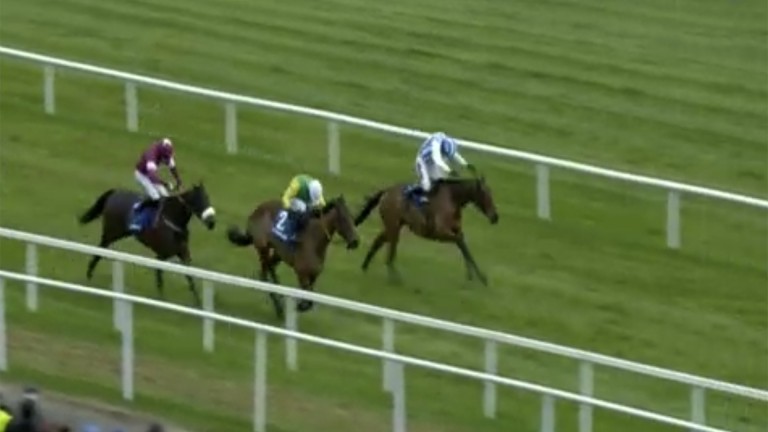 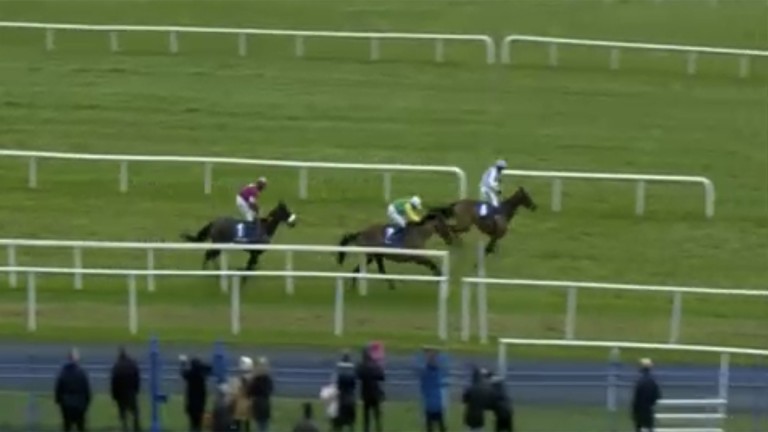 Led, not fluent 2nd, 6 lengths clear at halfway, reduced lead after 3 out, still going well after next and in command before last where pitched on landing and came to a standstill, rider lost iron and rallied in 3rd, stayed on again to lead close home

We hadn't gone that quick in the race and I thought we had it under control. We didn't meet the fence wrong at all, he just got a little tight and sprawled on landing. I was expecting to fall and was ready for it.

When he found a leg, I was lucky that he stayed dead straight, had he not done so and had gone left or right I'd have fallen off. It's one thing at a time with a jockey so you're not thinking that far ahead about what could happen.

With the height he got over the fence you know he was going to sprawl, I just stayed on his back and when he stood up it was more of a reaction than a thought.

His neck and head hit me in the chest – that's what kept me on – but I did notice the other two passing me only went by slowly. It's quite a large run-in at Leopardstown, so when I sat down on his back and he started to canter again I was thinking, 'If he really had as much left as I thought he had, he might catch these'. 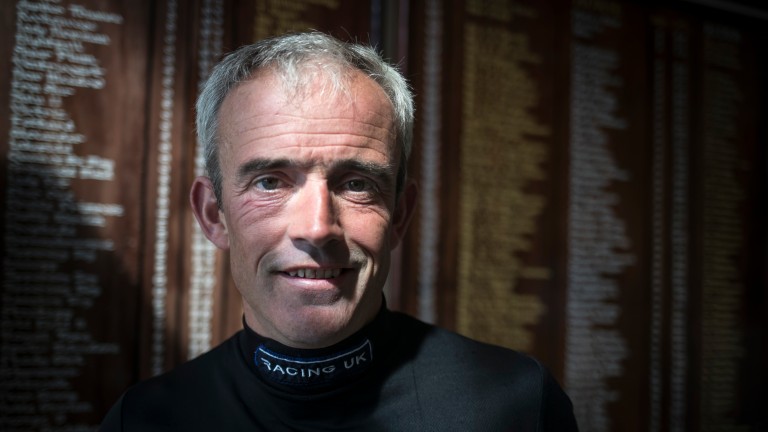 Ruby Walsh: "I kind of thought halfway up the run-in that I was always going to get there"
Patrick McCann (racingpost.com/photos)

I gave him a kick and a squeeze and he started the gallop again. I kind of thought halfway up the run-in that I was always going to get there.

He definitely felt like he was going well enough going to the fence before he lost his momentum, so I think it was about how bad the other two horses were as much as what he had left in the tank. Had they flashed by me, there was no way I'd have caught them.

Thankfully I couldn't hear the commentary! As soon as he crossed the line, all I was thinking was, 'Thank God he'd won'. It was a huge performance. Willie didn't say much to me afterwards – he was just laughing.

It went from the great highs to lows for the connections of Killultagh Vic as he picked up an injury following the race. It was to rule him out of Cheltenham, forcing him to sit on the sidelines for nearly two years.

He returned with victory in a hurdle race at Punchestown but that proved to be the final win of his career. Leopardstown's final fence did unfortunately get his revenge on Killultagh Vic – he fell there when in contention in the 2019 Irish Gold Cup.

He retired from racing under rules having won eight races from 27 starts and picked up £181,743 in prize-money. He had a run without success when fifth in a point-to-point at Mainstown in December.

Walsh, of course, had time for two more thrilling seasons in the saddle before famously calling it a day after Kemboy's success in the 2019 Punchestown Gold Cup.

FIRST PUBLISHED 9:30AM, JUL 23 2021
When I sat down on his back and he started to canter again I was thinking 'If he really had as much left as I thought he had, he might catch these'

'What Baaeed has done in such a short space of time is incredible' 'Four Gold Cups, an unbelievable horse' - Aidan O'Brien recalls Ascot hero Yeats 2021 Godolphin Stud and Stable Staff Awards winners Q&A: Joline Saunders 'We'd love to have more viewers - but we live in the real world' All that wasting, all that effort, for nothing - but still an awesome experience Copper Knight: 'It's ridiculous now looking back how he went for that price'