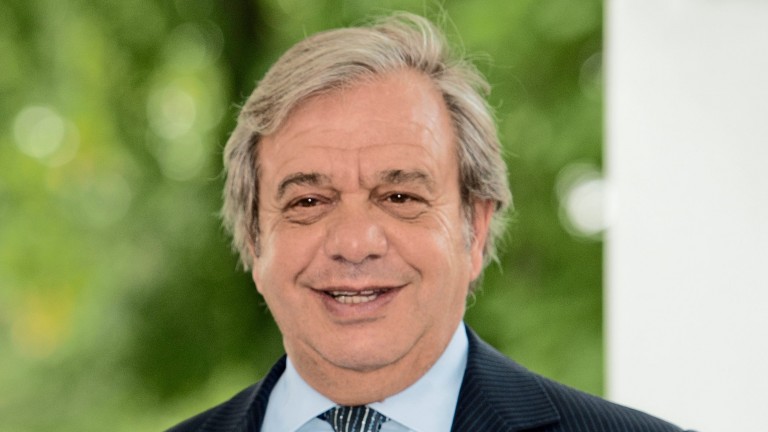 Elie Lellouche has announced his retirement after a glittering career
Edward Whitaker
1 of 1
By Scott Burton UPDATED 2:07PM, FEB 14 2018

Elie Lellouche has become the latest major name in French racing to announce his retirement from training in what is becoming a major changing of the guard in Chantilly, coming as it does after Francois Doumen and Criquette Head-Maarek both brought their careers to an end.

Lellouche has sent out a string of Group 1 winners from his base at Lamorlaye and will be best remembered for the devastating front-running win of Helissio in the 1996 Prix de l'Arc de Triomphe.

"It wasn’t a difficult decision at all when it came to it," said Lellouche on Wednesday. “I had lost a few clients and that forced my hand a little but I felt it was the right time to stop for a variety of reasons.”

Helissio, who carried the canary yellow silks of Spanish industrialist and politician Enrique Sarasola, had been the beaten favourite in the Prix du Jockey Club, leading to Lellouche protege Dominique Boeuf being replaced by a youthful Olivier Peslier that autumn.

Between 1990 and 2012 Lellouche enjoyed notable success training for Daniel Wildenstein and later his family, a relationship notable for its longevity when compared with many of the owners’ other collaborators down the years.

Among the Lellouche-trained champions to carry Wildenstein’s blue silks were Aquarelliste and Bright Sky, who won successive editions of the Prix de Diane in 2001 and 2002.

Aquarelliste went on to be best of the rest behind Sakhee in the 2001 Arc, while four years later Westerner filled the same spot behind Hurricane Run, having earlier in the season become the first French-trained winner of the Gold Cup since 1977.

"Helissio was obviously wonderful but don’t forget Westerner," said Lellouche. "Winning the Gold Cup was quite something and he was a horse who could run over any trip from a mile upwards.

"I wouldn’t come over to Britain too often but my horses were nearly always there at the finish when I did. Shake The Yoke won the Coronation and Bigstone did the Sussex and Queen Elizabeth II Stakes double. It was a good field he beat at Goodwood.”

It was indeed a very fine renewal of the Sussex in 1993, with Bigstone and Boeuf springing a 14-1 shock in beating that year’s Newmarket Guineas winners Sayyedati and Zafonic.

Lellouche’s final Group 1 winner for the Wildensteins was Beauty Parlour, who produced a stunning fine of foot to land the 2012 Poule d’Essai des Pouliches before finding Valyra too strong in the Diane.

The daughter of Deep Impact was then sent to Sir Henry Cecil as the Wildenstein bloodstock interests were separated between different parts of the family.

But Lellouche still had one more top-class runner to produce in Ectot, who won the Criterium International at two and, after an injury-interrupted campaign at three, was sent off fancied for the 2014 Arc when the choice of Gregory Benoist over the unbeaten Avenir Certain.

Ectot was raced by Gerard Augustin-Normand – latterly in partnership with Al Shaqab – but Lellouche is among those trainers to have suffered with the reduction in ranks of the great owner/breeders.

"I regret a little bit that there aren’t as many owner/breeders now as before," said Lellouche, who is likely to still be seen at both ParisLongchamp as well as Auteuil, given his love of jump racing.

"It’s hard work and if anything it is harder today than in the past. I will miss working with the horses a little, I suppose, but I’ll get used to it. I will continue to breed racehorses and as for owning, we’ll see."

Helissio
The Arc at Longchamp has always been a graveyard for those attempting to make all but Helissio brutalised his rivals to score from Pilsudski by five lengths. That was the son of Fairy King’s third Group 1 success and he would add the Prix Ganay and a second Grand Prix de Saint-Cloud at four.

Vallee Enchantee
Dominique Boeuf had only one rival behind him turning for home in the 2003 Hong Kong Vase but the homebred daughter of the Wildensteins’ brilliant Arc winner Peintre Celebre just took off in the straight, slicing through the field before reeling in compatriot Polish Summer inside the final half furlong.

Westerner
The dominant stayer in Europe across three seasons, Westerner already had a Prix du Cadran and a Prix Royal-Oak to his name by the time he went down to Papineau by a length and a half in the 2004 Gold Cup.

The son of Danehill put the record straight when the royal meeting wastransferred to York, beating Distinction by a neck. Connections then passed up the chance of a hat-trick in the Cadran in favour of a crack at the Arc, a gamble which came close to paying off spectacularly.

FIRST PUBLISHED 1:50PM, FEB 14 2018
I wouldn’t come over to Britain too often but my horses were nearly always there at the finish when I did