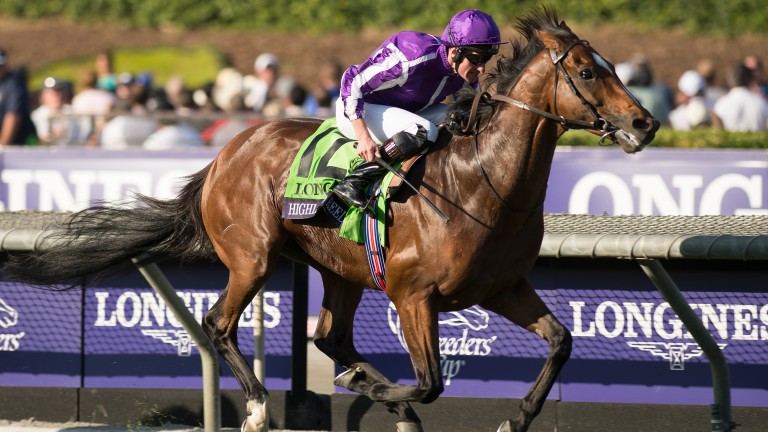 Seamie Heffernan landed the biggest victory of his career with an aggressive front-running performance on the electric Highland Reel, an iron-tough globetrotter who has won top races around the world. If anyone doubted whether jockey and horse were entitled to be counted among the world's best, this race surely put an end to that.

As so often, Heffernan sent his mount to the lead, but on this occasion there was no question of him just being there to set the pace for a stablemate. As the race unfolded Highland Reel and Heffernan went further and further clear, establishing a six-length advantage along the back stretch in a display of front-running dominance.

When the flying leader hit the final bend, Heffernan asked him to kick for home and left his rivals floundering in his wake. Flintshire and Found came with late, thrusting runs but it was too little, too late –the day belonged to Heffernan and Highland Reel.

Much has been rightly made of Arc heroine Found's remarkable constitution – and she demonstrated it again here with another fine placed effort on her tenth race of a season that may yet have sand in the glass – but Highland Reel is no couch potato himself.

He was making his eighth start of a campaign that began in Dubai, went on to Hong Kong, took in a King George victory at Ascot and an Arc second. Trainer Aidan O'Brien may now send him for the Japan Cup or Hong Kong Vase, and if horses earned air miles the trip would surely be gratis.

For all that, Highland Reel played firm second fiddle to Found in the run-up to this race and in the eyes of plenty of observers he looked less than a vintage King George winner – although connections were minded that he could well prove their number one.

With this, he proved beyond dispute his class. "We knew you could do it, son," Coolmore partner Derrick Smith said to the horse as he took the bridle to walk him into the winner's enclosure.

"He's always been underestimated," said O'Brien. "He's been placed in some massive races. His second in the Arc was incredible. He's got a great constitution, is physically very strong, mentally too. Tactically he's very quick. He loves racing, he's a total pro. It's everybody's dream to have a horse like this."

Heffernan rode his first Group-race winner for O'Brien 20 years ago and the trainer paid tribute to a jockey whose list of career wins, including 26 Group/Grade 1 victories, emphasises both his importance to the Ballydoyle operation and the strength in depth at the yard.

"Nobody knows the big horses better than Seamus, he's an absolute master of his craft," said O'Brien. "He's a world-class jockey, always has been. He's in his early 40s and every single year has got better. He's still getting better. I think in about ten years he might stop improving!"

Heffernan said: "I'm never really on the first string, although the first and third string can be equal, never mind the second string. Ryan Moore told me Highland Reel was the best chance on this track. I wasn't sure, I'd have gone for Found if I could."

More speculatively, Highland Reel could run in the inaugural Pegasus World Cup, the $12 million race at Gulfstream Park in January. "It's possible he could do anything," said O'Brien. "He's never raced on dirt but he's the type you couldn't rule out doing anything."

Flintshire will be retired to stud with career earnings of £6,248,729 –a record for a Juddmonte horse – and connections could not hide their disappointment he did not bow out with a win.

"We're a bit deflated," said Khalid Abdullah's racing manager Teddy Grimthorpe. "We had high expectations. The winner did well but we didn't quicken up good enough.

"He's going to Hill 'n' Dale Farm and Juddmonte retain an interest in him. I can't think there's a sounder, tougher or more brilliant horse going to stud. He's been remarkable."

Ulysses, beaten in a Group 3 at Windsor on his previous start, ran a huge race for Sir Michael Stoute to be fourth.

"Three world-class horses have beaten him," said Stoute. "That's his best race to date. He's going in the right direction."

The other British-trained runner, the David O'Meara-trained Mondialiste, weakened to finish last.

FIRST PUBLISHED 11:05PM, NOV 5 2016
If I had the choice I would have ridden Found! But it is nice to be on the team and it is nice to get the opportunities, I have a lot of people to thank