Heartbreak? There may be more scenes of unbridled joy 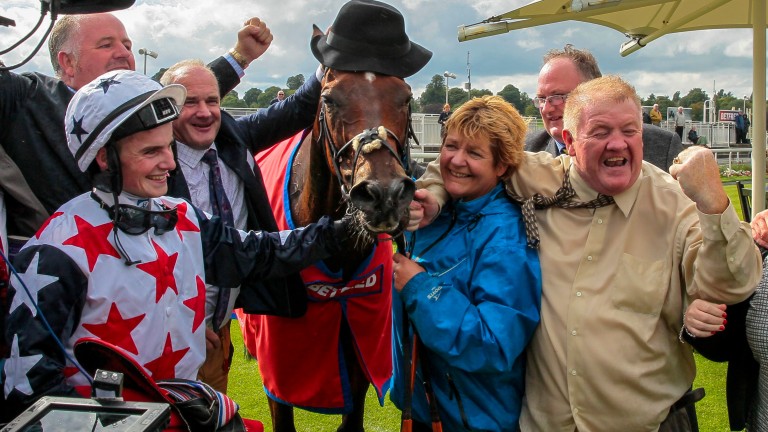 The colourful Here For The Craic Partnership will be at Leopardstown on Sunday to see Heartbreak City run in the coral.ie Handicap Hurdle
Mark Cranham
1 of 1
By David Jennings 6:34PM, JAN 17 2017

Warning! Aidan Shiels, Niall Reilly and Donal Gavigan, otherwise known as the Here For The Craic Partnership, will be at Leopardstown on Sunday.

The purpose of their visit is to see Heartbreak City run in the coral.ie Handicap Hurdle – so be prepared for more amazing scenes of unbridled joy in the winner's enclosure should the Ebor hero and Melbourne Cup runner-up justify his already skimpy price.

"The three lads will be there," said trainer Tony Martin, whose versatile performer was a best-priced 11-4 favourite on Tuesday night for what is traditionally a wide-open betting heat.

"The plan is to run provided the ground is not heavy, which it doesn't look like it will be, and young Donagh Meyler will ride.

"We've done plenty with him. He was up schooling on the Curragh last week and I was pleased with how he jumped. It's all systems go."

The three owners first shot into the public's glare in a Channel 4 interview with Nick Luck after Heartbreak City won the Ebor at York in August.

'Red' Shiels then gave Channel 7 reporter Neil Kearney more than he bargained for in an interview seconds after the horses had crossed the line in a very close finish to the Melbourne Cup at Flemington in November.

Shiels grabbed Kearney in a bear-hug, dragging him to the ground, yelling "I don't care" after he was told Heartbreak City had finished second. It became a YouTube sensation.

If the betting is to believed, Shiels and his partners will not have to settle for second this time – and the race sponsors believe he might go off as short as 6-4.

"Heartbreak City is already a really short price for such a competitive hurdle, but given how exceptional his Flat form is we reckon he could go off quite a bit shorter come Sunday; he could be 6-4," said Coral's Nicola McGeady.

She added: "Despite a strong favourite, there has been money elsewhere, with De Name Escapes Me being the latest horse to attract attention."

It could be another big pay day for 19-year-old Meyler, who has already won the Galway Plate on Lord Scoundrel and Munster National on Tiger Roll. He was successful on Heartbreak City during the Galway summer festival and is hoping lightning will strike twice.

There could be lots of Cheltenham clues on offer at Leopardstown as JLT Novices' Chase favourite Yorkhill is one of three possibles for Willie Mullins in the Grade 3 Coral.ie Novice Chase, a race he won last year with Killultagh Vic. RSA favourite Bellshill is also entered.

Last Sunday's Dan Moore Memorial Handicap winner Ball D'Arc could be set for a quick reappearance as he featured among the 22 left standing in the coral.ie Leopardstown Handicap Chase, for which he is 7-1 favourite with the sponsor.

At Navan on Saturday, Jezki features among 11 entries for the 2m Race Displays Event Signature Hurdle.

FIRST PUBLISHED 6:34PM, JAN 17 2017
We've done plenty with him. He was up schooling on the Curragh last week and I was pleased with how he jumped. It's all systems go at this stage anyway