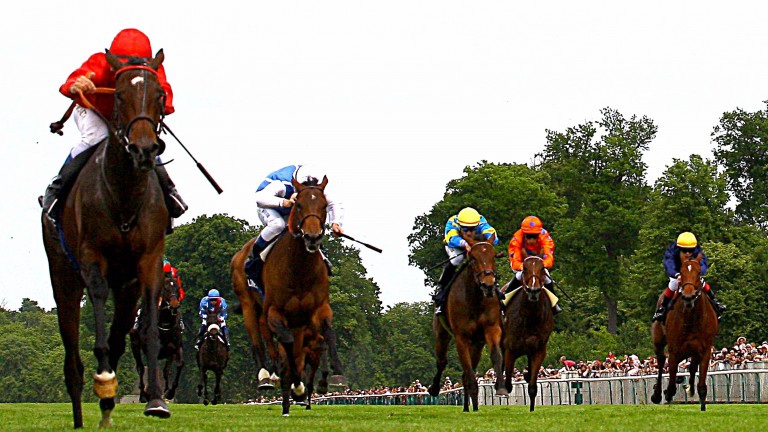 Treve winning the Prix de Diane Longines in the colours of her breeders, Haras du Quesnay. Full sister Terre will attempt to follow suit next month
Scoop Dyga
1 of 1
By Scott Burton 6:41PM, MAY 13 2017

Four years ago Treve stormed into the racing limelight when winning the Prix de Diane Longines by five lengths in a record time, and her trainer Criquette Head-Maarek is taking aim at the same prize with her sister.

Terre, the filly concerned, got off the mark at the third time of asking at Chantilly over ten furlongs at the beginning of this month, after which Head-Maarek said that the Classic on June 18 was not an impossible dream.

But such has been Terre's progress since then that her trainer has been emboldened to aim her at a Group 3 trial at Saint-Cloud on Tuesday week.

"I've put Terre in the Cleopatre at Saint-Cloud and she'll run there and then go on to the Diane," revealed Head-Maarek on Saturday.

"It was the second entry stage today and she wasn’t in it originally. She has done extremely well since her win at Chantilly. I was going to go straight to the Prix de Diane, but she's so full of herself that I think another race will help her."

Terre was offered for sale at Arqana in August 2015 but failed to reach her reserve when bidding stalled at €1.2 million.

Treve won the 2013 Diane in the scarlet colours of the Head family's Haras du Quesnay before going on to racing immortality in landing back-to-back editions of the Qatar Prix de l'Arc de Triomphe for new owners Al Shaqab Racing.

FIRST PUBLISHED 6:41PM, MAY 13 2017
I was going to go straight to the Prix de Diane, but she's so full of herself that I think another race will help her.