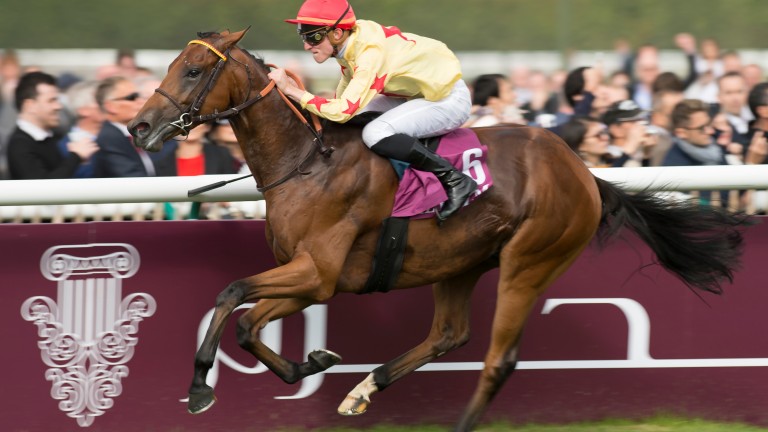 National Defense disappointed in the Poule d'Essai des Poulains but Criquette Head-Maarek retains faith in the son of Invincible Spirit
Edward Whitaker
1 of 1
By Scott Burton 11:00AM, MAY 23 2017

Criquette Head-Maarek is hoping National Defense can bounce back from a disappointing effort when sent off favourite for the Poule d'Essai des Poulains at Deauville ten days ago.

A Group 1 winner at two when making the running under Pierre-Charles Boudot in the Prix Jean-Luc Lagardere, National Defense failed to reproduce that form when held up by first-time partner Christophe Soumillon in the Poulains.

"He didn’t breathe at all, just the same as when he was third in a Group 3 at Chantilly last year," said Head-Maarek. "This horse loves to gallop and you can’t restrain him. Soumillon thought there would be plenty of pace on with Dettori on Rivet and decided to hold him up."

National Defense was beaten by subsequent 2,000 Guineas third Al Wukair on his comeback over a straight seven furlongs at Maisons-Laffitte last month and Head-Maarek hopes a return to a turning track will help the son of Invincible Spirit.

"In principle he'll be aimed at the Prix Jean Prat [on July 9] because I think he'll be much more at ease over 1,600 metres around the bend at Chantilly," she said.

"He showed the kind of horse he is at two: he won really well on debut at Deauville and then we tried holding him up next time and he resented it. He's a bit keen and needs to use that long stride.

"The other day he pulled hard and was surrounded by other horses so I knew it was all over, there was no way he'd be able to finish off his race."

FIRST PUBLISHED 11:00AM, MAY 23 2017
The other day he pulled hard and was surrounded by other horses so I knew it was all over, there was no way he would be able to finish off his race