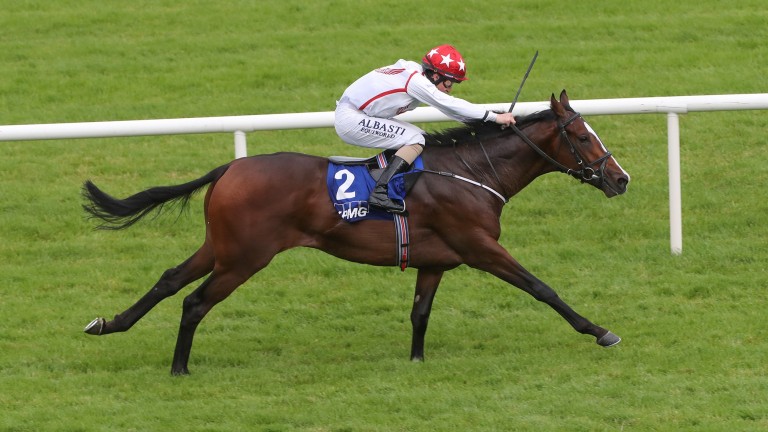 Cadillac: makes his eagerly awaited return to action at the Curragh on Saturday
CAROLINE NORRIS
1 of 1
By David Jennings UPDATED 6:57PM, JUN 25 2021

Cadillac was so classy at two that he was sent off just 4-1 for the Dewhurst.

He was only fifth behind St Mark's Basilica there, but prior to that he had chased home Mac Swiney in the Futurity Stakes and dished out a three-and-a-half-length beating to Van Gogh in a Group 2 at Leopardstown on Irish Champions Weekend. That is strong form.

He concluded his two-year-old campaign by finishing fourth in the Breeders' Cup Juvenile Turf and, unsurprisingly, is the highest-rated of these with a mark of 114.

That puts him 3lb clear on the figures and he should win if he is fit enough to do himself justice.

That said, this is a very competitive Group 3 and True Self went down fighting in the Group 1 Tattersalls Gold Cup last time.

The globetrotting mare is teak-tough and could easily bounce out of that Curragh battle to claim a 12th win. Billy Lee rides for the first time, taking over from Hollie Doyle.

Njord is a battle-hardened handicapper who fully deserves his mark of 109 but is vulnerable to something above-average in a Group race.

Aidan O'Brien has won five of the last eight runnings, but his challenge does not looks as powerful as usual with Lough Derg and Ontario arriving in the race on the back of poor performances. Both have plenty to prove.

Joseph O'Brien, who won the race in 2019 with Buckhurst, is triple-handed and all three are interesting.

Southern Lights fluffed his lines in the Cazoo Derby at Epsom but remains unexposed, while Dawn Patrol makes his first start for the stable having finished third in last year's Irish Derby when trained by his father, Aidan. Raise You completes the team.

Michael Halford, trainer of Finans Bay
He has it all to do on ratings but he's in good form and we felt he was worth a step up in class. If he ran in the first three we'd be delighted with him. The trip and the ground should suit him well.

Jessica Harrington, trainer of Njord and Cadillac
Cadillac was a bit late starting off, which is just the way things happened, but I'm looking forward to getting him out there. I think I've done enough work with him and think he can run a big race. He's in good order. Njord is a nice runner to have, provided we get enough rain. If the ground is good he’ll run but we'd like rain.

Willie Mullins, trainer of True Self
She ran a cracker in the Tattersalls Gold Cup. We were hoping she would finish in the first five and she ended up finishing in the first three. This race is on our doorstep which is great, and at least she's not travelling to England or France or Saudi Arabia or Australia or somewhere like that!

Aidan O'Brien, trainer of Lough Derg and Ontario
Lough Derby was a little disappointing at Limerick but he was trapped back in a slowly run race and no horse seemed to make up ground in it. We think he can leave that run behind him here. We put blinkers on Ontario in the St James's Palace Stakes and they just lit him up a bit too much. He was too keen.

FIRST PUBLISHED 6:00PM, JUN 25 2021
She ran a cracker in the Tattersalls Gold Cup. We were hoping she would finish in the first five and she ended up finishing in the first three

Hopes high of strong European team for Spring Carnival despite veterinary checks Who has the upper hand in a red-hot running of the BMW Mile Handicap?