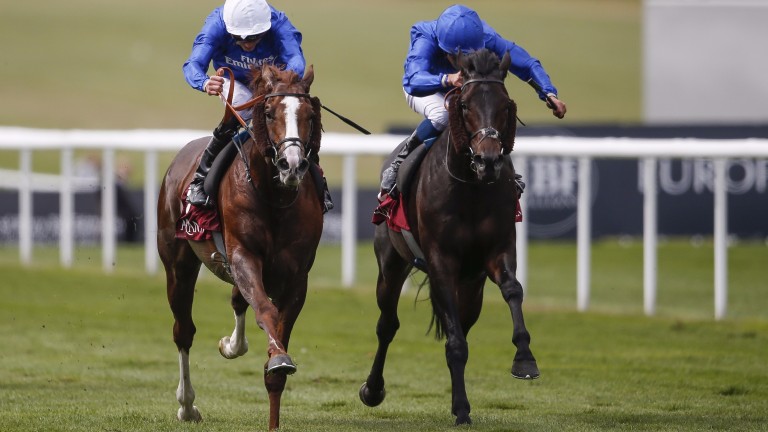 Last month's Princess of Wales's Stakes winner Hawkbill proved no match for local fancy Dschingis Secret when bidding to provide Godolphin with a fourth win in the Group 1 Grosser Preis von Berlin at Hoppegarten on Sunday.

The four-year-old, winner of the Eclipse last year, was partnered by James Doyle in place of the injured William Buick but, having made the running – as he had done at Newmarket the time before – he found Dschingis Secret a length too strong in the run to the line.

Godolphin also had the third home, Racing History, who was beaten a further three and a half lengths on his first run of the year.

Trainer Charlie Appleby, who had suggested Hawkbill's autumn campaign would be geared towards targets in Canada, said: "He jumped well and got his own way in front but having travelled well throughout he was beaten fair and square.

"The winner picked up better but I was pleased with him as it was another good, solid effort.

"The plan now is to send him for the Northern Dancer Stakes [at Woodbine in September] and if he can run another decent race there and finish in the first three we'll have a crack at the Canadian International."

The Markus Klug-trained winner was partnered by Adrie de Vries, who had picked up the 'ride of the day' award at the Shergar Cup at Ascot 24 hours earlier for his cool handling of 2m winner Euchen Glen.

FIRST PUBLISHED 5:37PM, AUG 13 2017
The winner picked up better but I was pleased with him as it was another good solid effort. The plan now is to send him for the Northern Dancer

Longhouse Poet given 33-1 quote for Grand National after Thyestes Chase triumph Klassical Dream deposed as Stayers' favourite after Royal Kahala causes upset 'It’s not just a picture in a magazine' - why seeing a sire in the flesh is best 'I can't stop crying' - how social media reacted to an incredible Clarence House Which horse who caught your eye today will you be backing next time? 'I was able to dictate' - Eclair Surf routs Classic Chase field for Bellamy