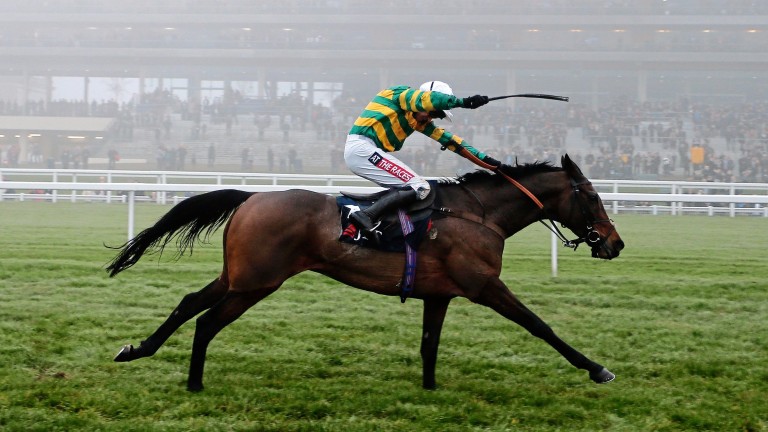 Unowhatimeanharry gallops through the Ascot mist to win the Long Walk Hurdle
Alan Crowhurst
1 of 1
By Lee Mottershead 4:12PM, JAN 27 2017

It was at Cheltenham in November 2015 that Unowhatimeanharry first ran for Harry Fry. Every time he has returned his reputation has been considerably bigger. The same is true this afternoon.

It was off a lowly mark of just 123 that Unowhatimeanharry made a winning debut for Fry. He has done nothing but win for him ever since. At last season's festival he became a Grade 1 champion for the trainer's racing club and since being acquired by JP McManus he has won twice more, including last time in the Long Walk Hurdle, taking his rating up to 167.

The nine-year-old, who is the best-priced 11-4 favourite for the Sun Bet Stayers' Hurdle, now seeks to make it eight wins in a row. However, to strengthen his position at the head of the market he must win a Cleeve Hurdle that has attracted an unusually large field.

He also faces some serious rivals, including Ballyoptic, who was far from beaten when coming down at the final flight in the Long Walk, at which the reopposing West Approach also departed having run a huge race. Ballyoptic is now 4lb better off with Unowhatimeanharry, while West Approach takes on the market leader on 6lb more favourable terms.

Un Temps Pour Tout finished a fine third to Unowhatimeanharry in the Long Walk and now sports the blinkers he wore when winning so readily over fences at the 2016 festival.

Paul Nicholls, trainer of Old Guard and Ptit Zig
Old Guard ran okay off top weight in the Lanzarote. I just want to see if he will get three miles and whether to have a crack at the Stayers' Hurdle. He wouldn't want it to rain too much. Ptit Zig didn't quite run up to his best at Ascot before Christmas but he'd had a few hard races in the autumn. He seems fresh and well and has an outside chance.

Lizzie Kelly, rider of Reve De Sivola
He is a little bit old now but I don't think he's had his perfect ground. He wants a wet winter, which we've not had. He still feels amazing at home.

Harry Fry, trainer of Unowhatimeanharry and Whataknight
Unowhatimeanharry thrived on racing last season and is thriving on it again this season. I suppose on ratings he is entitled to be odds-on, and he does have good form with many in the field, but he is giving Ballyoptic weight and Dickie Johnson clearly felt he still had a chance when he came down at the last at Ascot. Whataknight faces a very tough ask and could struggle in the ground.

Nigel Twiston-Davies, trainer of Ballyoptic
He has been very unlucky. He looked like he could win or be second in two hurdles when he has fallen at the last, basically through no fault of his own. Now he is getting 4lb from Unowhatimeanharry he must have every chance.

David Pipe, trainer of Un Temps Pour Tout
He ran well at Ascot and we're going with a good chance. We've put the blinkers back on him.

Colin Tizzard, trainer of West Approach
Because he is a half-brother to Thistlecrack we want to make sure he isn't good enough for the Stayers' Hurdle. We have the main man on, Ruby Walsh, so it will be useful to see what he can tell us about him.

George Charlton, trainer of Knockara Beau
The horse is in great form. It was a nice run at Carlisle last month. It was his usual performance, and although time tells us he should be becoming a decrepit old racehorse now, he shows no signs of it at all.

Nicky Henderson, trainer of Kotkikova
I was happy with her at Leopardstown and expect her to come on a ton for it. The mares' race that was abandoned at Ascot and Huntingdon would have been perfect but I need to run her as she likes soft ground.

Warren Greatrex, trainer of Cole Harden and Shantou Bob
If there's no rain at Cheltenham Cole Harden would have a very good each-way chance – if not better – although he'll run regardless of the weather as he loves racing. He's in serious order. The more rain the better for Shantou Bob – in fact, if they don't get any rain he might not run. He has really pleased me this season and cheekpieces could transform him as he can go lazy in a race and give himself a lot to do.

FIRST PUBLISHED 3:44PM, JAN 27 2017
I suppose on ratings he is entitled to be odds-on, and he does have good form with many in the field