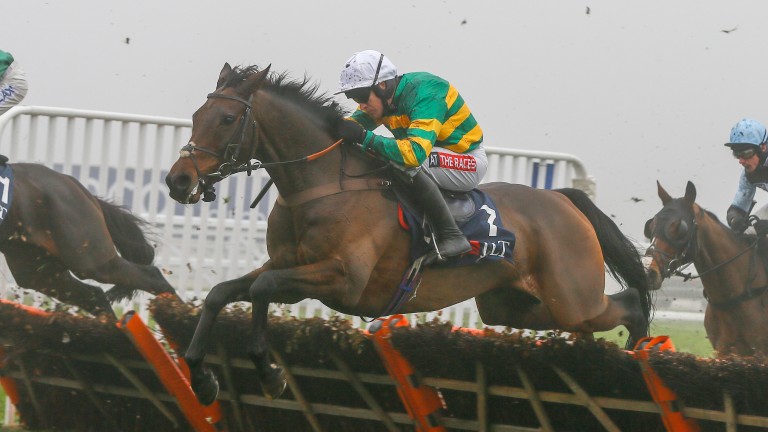 Unowhatimeanharry pings another on his way to victory
Mark Cranham
1 of 1
By James Burn 1:52PM, DEC 19 2016

The Harry Fry-trained Unowhatimeanharry emerged from the gloom at Ascot to make it seven wins from his last seven starts in the Grade 1 JLT Long Walk Hurdle.

Ridden by Barry Geraghty, the 6-5 favourite was expected to take all the beating in the £100,000 feature and did just that, dismissing 8-1 shot Lil Rockerfeller by four and a half lengths.

Un Temps Pour Tour was third at 16-1, but the admirable Ballyoptic would likely have played a part in the finish had he not exited at the final hurdle, although he soon got to his feet.

Paddy Power made Unowhatimeanharry their 2-1 favourite for the World Hurdle (from 5), while Betfair went 9-4 (from 5).

Geraghty was also impressed. He said: "He had to work harder today and it was a good performance. He's very good and he only does as much as he has to, and probably has a bit more class than he lets on."

Snapped up by Geraghty's gaffer JP McManus in the summer, the eight-year-old developed into a smart staying novice hurdler last term, which was his first with Fry after switching from Dorset trainer Helen Nelmes.

Sporting the colours of Fry's 40-strong racing club, Unowhatimeanharry captured a few handicaps and a Graded race at Cheltenham before graduating to the holy grail with victory in the Albert Bartlett Novices' Hurdle at the festival.

Thoughts of chasing were not really discussed in the off season and the son of Sir Harry Lewis announced himself as a major player in the staying hurdling division by bolting up in Newbury's Long Distance Hurdle last month.

He will now attempt to emulate Long Walk winners Baracouda, My Way De Solzen, Big Buck's and Thistlecrack by winning Cheltenham's championship in the same season.

His prep for that could come via the Cleeve Hurdle at Cheltenham on January 28.

"That’s seven from seven and quite incredible - the dream goes on," said Fry.

"It was a proper test today, which it was always going to be. Barry has come back in and said he's really had to fight for him from four out, but then he only does what he needs to. He's very much like that at home, but if he keeps doing that we'll be happy.

"We'll let him come out of this and speak to Barry and the team but I'd have thought we'll look at the Cleeve Hurdle at the end of January and then hopefully all systems go to the big one in March, but we’ll enjoy today first. It's a memorable day."

Fry, who was winning his third Grade 1, added: "It's extraordinary. You could never have predicted this but that's what's brilliant about National Hunt racing. Sometimes these horses come along and just keep finding. He's just got in the winning habit and when they get a bit of confidence you never know where they'll end up.

"It's important to celebrate today as these Grade 1s don't come around that often and March is still three months away. It's fantastic.”

FIRST PUBLISHED 2:43PM, DEC 17 2016
He's very good and he only does as much as he has to and probably has a bit more class than he lets on