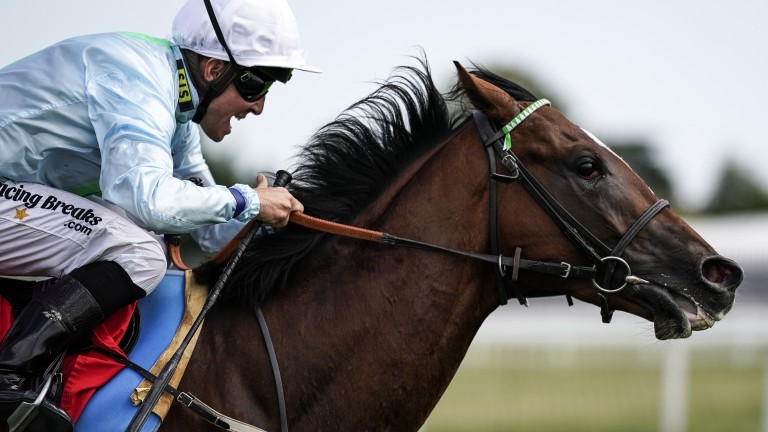 Jackfinbar and Jim Crowley were convincing winners of the Group 3 Prix de Lutece at Longchamp on Sunday
Alan Crowhurst
1 of 1
By Scott Burton 6:23PM, SEP 2 2018

With Knight To Behold's success at Deauville still fresh in the memory Harry Dunlop showed once again his eye for the French programme book, as Jackfinbar and Jim Crowley saw off the challenge of favourite Ziyad in fine style in the Group 3 Prix de Lutece.

A winner in handicap company at Sandown on his most recent start, Jackfinbar raced in an isolated second behind pacemaker Solesili before staying on powerfully up the Longchamp straight to win by two lengths, with a yawning nine lengths back to the third.

"This has been the plan for a while and we avoided the temptations to run elsewhere," said Dunlop. "It was a very tactical race and he's just a lovely horse who keeps improving. He's a lovely stayer and we have to come back for the Prix Chaudenay on Arc weekend now."

With Olivier Peslier setting the fractions aboard Solesili, Crowley was spared the fate of having to set his own pace, a fate suffered by so many visiting jockeys in staying races at the track.

"Olivier went a nice pace in front and I could just do my own thing and then had something to aim at," said Crowley. "This horse has really improved and Harry has done a fantastic job with him.

"It was a good bit of planning. The form had worked out well from Sandown and I think he'll be a nice Cup horse next year."

It was a day of notable firsts for two women trainers who look set for bright futures.

Jane Soubagne trains a string of 20 at La Teste in the south-west of France and struck gold at her first attempt in Group company when The Black Album and Mickael Barzalona held all at bay in a tight finish to the Group 3 Prix la Rochette, and former Pascal Bary assistant Josephine Soudan saddled a first Listed winner when Maroubra lowered the colours of several well-regarded fillies in the Prix de Liancourt.

FIRST PUBLISHED 6:23PM, SEP 2 2018
Harry has done a fantastic job with him and I think he'll be a nice Cup horse next year