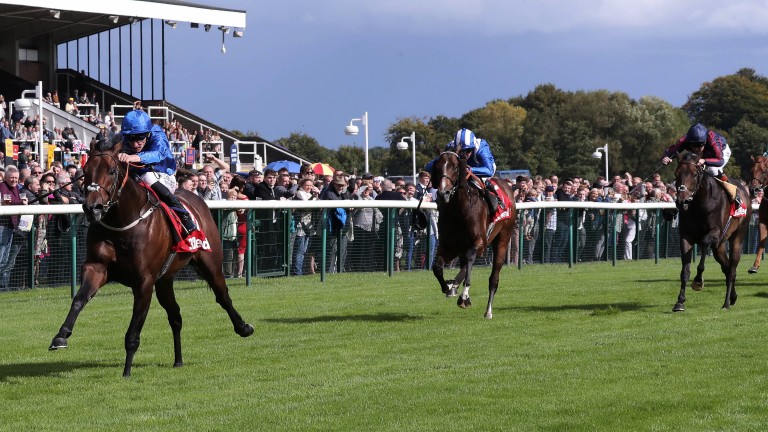 League of his own: Harry Angel proves far too good as he motors clear to win the Sprint Cup
John Grossick (racingpost.com/photos)
1 of 1
By Andrew King UPDATED 6:23PM, SEP 10 2017

Speed king Harry Angel has come out of his scintillating victory in the Group 1 Haydock Sprint Cup in great heart and is more than likely to head to Ascot next month to attempt to make racing history by landing the British Champions Sprint.

The Clive Cox-trained three-year-old could become the first horse to take the July Cup, Sprint Cup and Champions Sprint in the same year since the last-named contest took on its current guise in 2011. He is a best priced 6-4 to achieve the landmark hat-trick.

Harry Angel, partnered by regular jockey Adam Kirby, pulverised a top class field of sprinters into submission on Saturday at Haydock, and his trainer reported his stable star to be “absolutely super” on Sunday morning.

He said: ”He has come out of the race really well and we couldn't be happier with him – he was absolutely super when I visited his box this morning.

"He seems really fresh and well after eating up last night and licking his manger clean, which is always a good sign.”

After the Haydock victory Cox had indicated the Ascot race next month would be the ideal next step for Harry Angel and confirmed those thoughts, saying: “It's very much the hope Ascot in six weeks is the logical next step. I still have to talk it over fully with connections but that seems the right race and the way to go.

“After Ascot I'd think that would be it for the season but I hope he might stay in training next year as he's only three and Haydock was only his seventh career start, and there seems to be plenty more to come. However, that is also something that will be discussed with his owners at the appropriate time.”

Cox played down any thoughts of his stable star making the trip to Australia in mid-October for the A$10 million (£6.1m/€6.7m) Everest at Randwick.

He said: “The domestic programme is full of very nice opportunities and at this stage of the horse’s career that will do. He is maturing all the time and is obviously a very exciting young horse, so we have looked no further afield at this present time."

FIRST PUBLISHED 12:24PM, SEP 10 2017
He has come out of the race really well and we could not be happier with him as he was absolutely super when I visited his box this morning