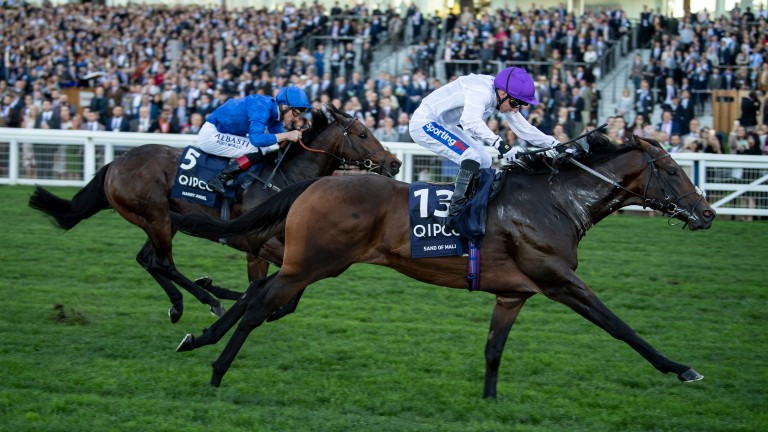 Harry Angel (left) returns to form to finish second to Sands Of Mali in the Champions Sprint
Edward Whitaker
1 of 1
By James Stevens 4:40PM, OCT 20 2018

Godolphin will make a decision about the future of star sprinter Harry Angel in the coming days following his rejuvenated effort to finish second in the Champions Sprint Stakes.

The Clive Cox-trained four-year-old, who dazzled in his July and Sprint Cup victories last season, bounced back to form when beaten a length by Sands Of Mali in the Champions Day Group 1, but he could be the latest addition to Godolphin's stallion ranks at Darley.

Sam Bullard, director of stallions at Darley, said: "He's run a blinder and we're very happy with him. I'm not sure whether he'll be retired, we'll need to speak to Sheikh Mohammed. A decision will be made soon."

Adam Kirby, who has ridden Harry Angel on all 12 career starts, said: "It's a shame to be beat and it would have been nice to end things on a high.

"He's been great for us and he'd have taken them apart if the ground was livelier, but this ground just blunts his gear change. I feel a bit sorry for him, but he owes us nothing, is a fantastic sprinter and has been a pleasure to deal with."

Harry Angel has five wins to his credit and has earned £873,503, but he has enjoyed little luck at Ascot where he is winless in six starts.

Godolphin, meanwhile, were crowned champion owners on Saturday. It was their fourth straight title triumph.

FIRST PUBLISHED 4:40PM, OCT 20 2018
We will need to speak to Sheikh Mohammed and a decision will be made soon