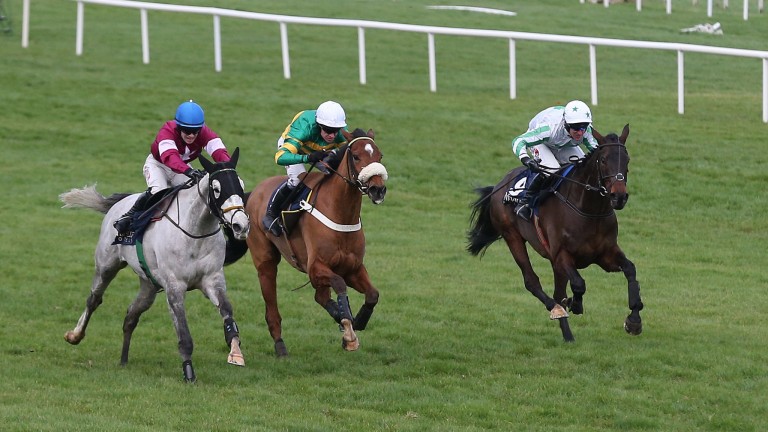 Our Duke, far side en route to victory at Leopardstown over Christmas, could tackle the Boylesports Irish Grand National
CAROLINE NORRIS
1 of 1
By Richard Forristal 9:42AM, FEB 22 2017

An ambitious tilt at the BoyleSports Irish Grand National could be on the agenda for Our Duke after Jessica Harrington revealed that the prestigious €500,000 Easter Monday handicap will be considered for her Grade 1-winning novice.

Harrington and the Cooper family who own the seven-year-old had already decided to skip the Cheltenham Festival with the son of Oscar, who had the tables turned on him by Disko on dropping back to two and three quarter miles in the Flogas Novice Chase on February 12.

The Grade 1 Ryanair Gold Cup over a similar trip is also an option for Our Duke at Fairyhouse, but Harrington will consider a shot at the massive National pot over the extended three-mile-five-furlong trip on April 17.

"He has two options at Fairyhouse," the Moone handler revealed.

"He will either go for the Irish Grand National or the Ryanair Gold Cup, if it happened to come up very soft. The Gold Cup is only two and a half miles, and he is a genuine three-miler, so he would need plenty of cut in the ground over that distance. If the ground was alright, he could then go to Punchestown for the three-mile novice chase."

Traditionally, novices have fared well in the Irish Grand National, which this year boasts a record prize-fund for an Irish jump race. Of the past 12 winners, half have technically been novices, albeit some of the six were more experienced than others.

FIRST PUBLISHED 9:42AM, FEB 22 2017
He will either go for the Irish Grand National or the Ryanair Gold Cup, if it happened to come up very soft