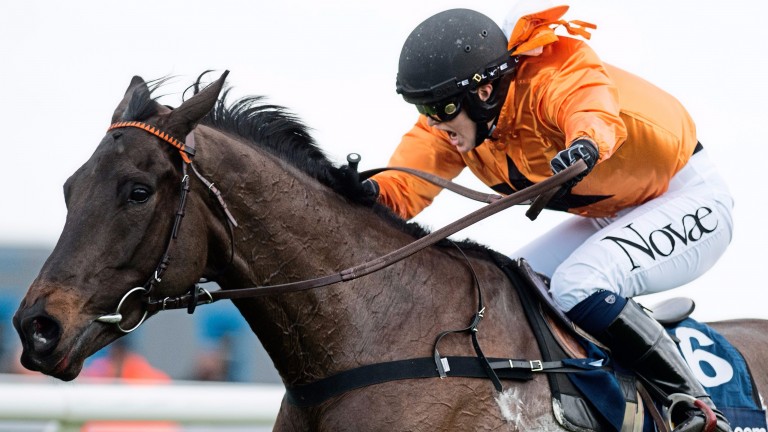 Bristol back in fashion

Nigel Twiston-Davies prefers to view Bristol De Mai's Gold Cup prospects based on his Peter Marsh Chase win and not his defeat by Native River in the Denman Chase last time.

The grey destroyed his rivals to win by 22 lengths in the Haydock handicap but on his next start finished last of three at Newbury.

Twiston-Davies said: "I'm quite excited on his Haydock run. There were very good reasons for his Newbury run. He was very lame afterwards.

"Things should be better this time. If he'd come here straight from Haydock he'd be five or six points shorter. He'll run a really good race."

Champion trainer and four-time Gold Cup winner Paul Nicholls cannot muster a contender of the calibre of greats Kauto Star and Denman, or even See More Business, but he predicts a good show from Saphir Du Rheu.

A Grade 1 winner as a novice chaser, Saphir Du Rheu was second in the Stayers' Hurdle two years ago but had been on a long losing run until he took the Ivan Straker Memorial Chase at Kelso last month.

"Hopefully he'll run tidy," said Nicholls. "He was second in the World Hurdle two years ago and then it fell apart a bit. He's been coming back to himself and ran well at Cheltenham in January. He needs to improve but I wouldn't be surprised if he ran well."

Jonjo O'Neill won the Gold Cup twice as a jockey and has two chances of a second winner as a trainer.

O'Neill, who famously partnered Alverton and Dawn Run to dramatic victories and provided Sir Anthony McCoy with a memorable second win in the race on Synchronised, runs Minella Rocco and More Of That.

A good deal of reshuffling has been required following the injuries suffered by owner JP McManus's principal jockeys Barry Geraghty and Mark Walsh, and both horses have last-race mishaps to put behind them.

But they are already festival winners – More Of That in the 2014 World Hurdle and Minella Rocco in last year's National Hunt Chase – and both have the ability to surprise. Minella Rocco will be ridden by Noel Fehily, who is enjoying a fabulous festival.

O'Neill said: "They're both entitled to their place in an open Gold Cup and we're hoping they both run well.

"More Of That has been very in and out, but he'd have been there or thereabouts at Leopardstown [unseated last] and it was the first time we've seen him travelling and jumping like that for a while. You'd like to see him do it again but it was encouraging.

"Noel has come in for the ride on Minella Rocco because he's ridden him before. He's got round only once in three starts since he won last year, but he's a great jumper at home. You can't teach him anything."

Outlander, the Lexus Chase winner, represents the Gordon Elliott-Gigginstown House Stud-Bryan Cooper alliance that landed the prize a year ago with Don Cossack and will be attempting to give his owner a third win in the race, War Of Attrition providing the first in 2006.

The nine-year-old has not run since his Grade 1 victory at Leopardstown in December, when he had the reopposing Djakadam almost three lengths behind in third.

He has been kept fresh for this race, which marks his third appearance at the festival. He fell four out in the JLT a year ago, having finished sixth in the Neptune in 2015.

Elliott said: "Outlander's in very good form. We're very happy with him and the ground should be fine. He's not in the same league as Don Cossack but deserves to take his chance and we're hoping he'll run in the money."

Jessica Harrington made history on Wednesday when Supasundae's win in the Coral Cup made her the most successful female trainer at the Cheltenham Festival, and here Sizing John, in the same ownership as Supasundae, will be her first Gold Cup runner – and also a first ride in the race for Robbie Power.

Only two horses – Jodami in 1993 and Imperial Call in 1996 – have completed the Irish Gold Cup-Cheltenham Gold Cup double in the same season and Sizing John will be bidding to join them having landed the Leopardstown event last month on his first attempt over three miles.

Harrington, who twice won the Queen Mother Champion Chase with Moscow Flyer and a Champion Hurdle with Jezki, said: "We were delighted with Sizing John at Leopardstown. He got the trip well and, while he has another two furlongs to travel this time, we don't see that being a problem.

"Robbie [Power] was all for stepping him up in trip after riding him over two miles.

"I think the better ground will bring out the best in him. I've watched the video of last year's Arkle and I loved the way he pinged the last two fences and galloped up the hill behind Douvan."

Smad for a place?

The 2015 Hennessy Gold Cup winner Smad Place has become a standing dish at the festival and this will be his seventh successive appearance.

Third twice in the World Hurdle and a fine second to O'Faolains Boy in the 2014 RSA Chase, he has been found wanting in two Gold Cups, including as a fancied 10-1 shot a year ago following a trials day defeat of Many Clouds.

Though a respectable third to Many Clouds in the same race in January, he is an outsider this time.

Trainer Alan King said: “I’m under no illusions he’ll be up against it. But he jumped as well as I’ve ever seen him when finishing third in the Cotswold Chase here last time and any rain would help.

"We've nothing to lose by having one last shot and he could run well, though he'll probably find some of the opposition a bit too good."

Tea in the party

Tea For Two is 66-1 but no rag having finished only a short head and a head behind runner-up Cue Card in the King George and then won at Exeter.

“I think we have a good place chance and are better than some in the race. I’m quietly confident of a good run,” said jockey Lizzie Kelly.

“Although I’m not thinking about the possibility of ­winning I do think, ‘Would it be such an enormous shock?’ – maybe not. In England the King George is the race the majority use as their prep for the Gold Cup and he wasn’t far away.

“The way the race will be run will suit. Native River and Smad Place will probably go on, so they won’t be hanging around, which will suit him. I would think we have a good chance.”

Kelly says the Gold Cup day atmosphere could be a bigger concern than the course.

“He gets quite buzzy in the prelims and the start is close to the stands,” she added. “It’s only his second time at Cheltenham. The first time was in the Albert Bartlett when he didn’t run very well, although he wasn’t right on the day."

And he is entitled to be here. Although he has not run well since, he had Cue Card back in third when a surprise winner of the Charlie Hall at Wetherby on his reappearance and was a festival winner two years ago when beating Thomas Crapper in the novice handicap chase.