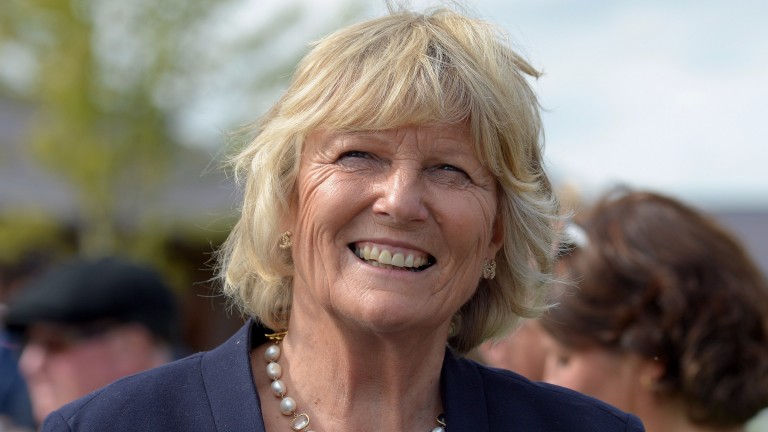 Jessica Harrington has reported her monster two-year-old filly Alpha Centauri to have come out of her debut win at Naas in good form, and she is looking forward to her tackling the Coolmore Stud Irish EBF Fillies' Sprint Stakes (3.45).

After that promising success Harrington revealed she'd had to take a second look when she weighed the filly when she first arrived at her yard, as the scales read 530 kilograms – similar to what some of Harrington's jumping stars might weigh.

Whatever way you look at it, Alpha Centauri seems no ordinary two-year-old, and Harrington admits she will have to consider a trip to the royal meeting should the filly progress again.

"This is her next step and hopefully it goes to plan," said Harrington. "She came out of her maiden win in very good form and we think she is very good.

"If she runs well you'd have to start thinking about Royal Ascot with her."

Alpha Centauri accounted for the Aidan O'Brien-trained Actress when winning her maiden, and she reopposes after shedding her maiden tag at the Curragh last weekend.

O'Brien said: "She was beaten by Jessica's filly on debut earlier in the month but she has progressed nicely and won her maiden in good style last weekend.

"We're very happy with her and are looking forward to a nice run."

Perhaps the forgotten horse in the race is the Kevin Prendergast-trained Moonlight Bay. The daughter of Pivotal landed the opening juvenile race of the season here in March and is having her first start since that win. The extra furlong should not be a problem.

O'Brien also has a leading contender for the Coolmore War Command Rochestown Stakes (3.15) in the shape of Dali.

The Scat Daddy colt, who was beaten by the reopposing True Blue Moon on debut at Dundalk, got his head in front over this course and distance on his second start and will be bidding to secure his place at Royal Ascot with victory.

O'Brien said: "He's been in very good form since he won here a few weeks ago and we're very happy. He's a colt who has a lot of natural speed."

Fozzy Stack is another trainer looking towards Ascot, in his case with Sirici, who has won her last two starts at Dundalk and will be having her first start on turf.

Stack said: “I'd be a little bit worried about the ground but she'll take her chance. She's a very good honest filly and if she were to run well we'd think about giving her a chance to run in the Queen Mary.”

T For Tango is another interesting runner who is stepping up in grade after winning his maiden over course and distance last month for James Nash.

FIRST PUBLISHED 6:00PM, MAY 20 2017
If she runs well, you would have to start thinking about Royal Ascot with her