Harrington and Power sign off in style with Rock The World 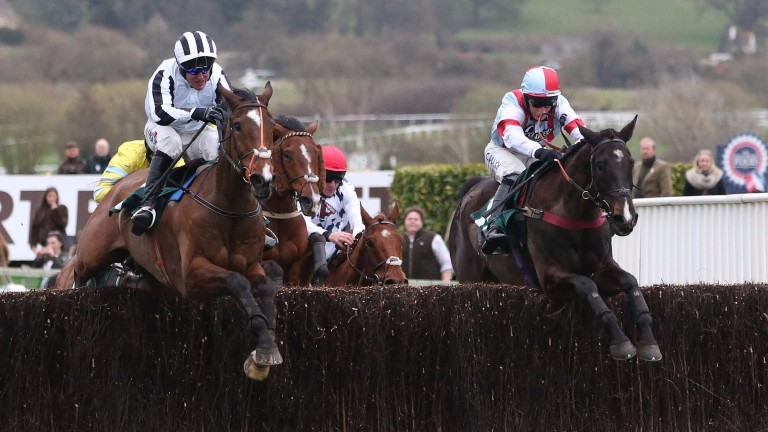 Jessica Harrington and Robbie Power did not think it could get any better after adding a fabulous Gold Cup win with Sizing John to Wednesday's Coral Cup spoils with Supasundae.

But Rock The World had 'previous' in the Johnny Henderson Grand Annual Chase and, with the benefit of a wind op and drying ground, he stepped up on last year's third to lead at the last and beat Gardefort by a length and three-quarters.

It was Harrington's second win in the race, following Space Trucker in 1999, and she said: "If I was ever wanting to win a race here this was the one. I've been staying with the Henderson family for about 20 years."

Harrington added: "Rock The World is a beautiful jumper and he absolutely pinged the last. It's been an absolutely fantastic week. Just amazing. I shall have a grin on my face for about a fortnight."

Power was also on cloud nine and said: "It's unbelievable to have had three winners here. I had one winner in 2011 then the last six years had been dry, but we had the best team coming here we've ever had."

He added: "Full marks to Jessie because he ran terrible here in October. He had a wind operation afterwards and hadn't run since, so it was a fantastic training performance.

"Last year his wind just caught him out and the ground was a bit slow, but he's the most wonderful jumper and was foot-perfect everywhere."

Daryl Jacob was disconsolate after finishing second for a third time in four days.

He said: "All of my horses have run great but none of them got their head in front, which is very disappointing."

Nicky Henderson would have loved a third win in his father's race but was more than happy with Theinval's third place, and was delighted to present the trophy to Harrington and owner Michael Buckley, for whom he saddled Brain Power in the Champion Hurdle.

He said: "If I was giving the prize to anybody I would struggle to do better than Jessie and Michael. Jessie has stayed with us all week, and I'll be back with her at Punchestown. I couldn't be more pleased."

Buckley is a big investor in racing and this was some consolation for Tuesday, when Brain Power was part of an ambitious super yankee, including a greyhound at Towcester, that yielded just one 2-5 winner.

Earlier in the afternoon he won at Down Royal with the only other horse he has with Harrington, Bright Tomorrow. This was a pretty bright day too!

2015 Champion Chase winner Dodging Bullets, who pulled up before two out, was retired post-race by trainer Paul Nicholls.