Hardie in the wars but happy to ride out Twitter storm 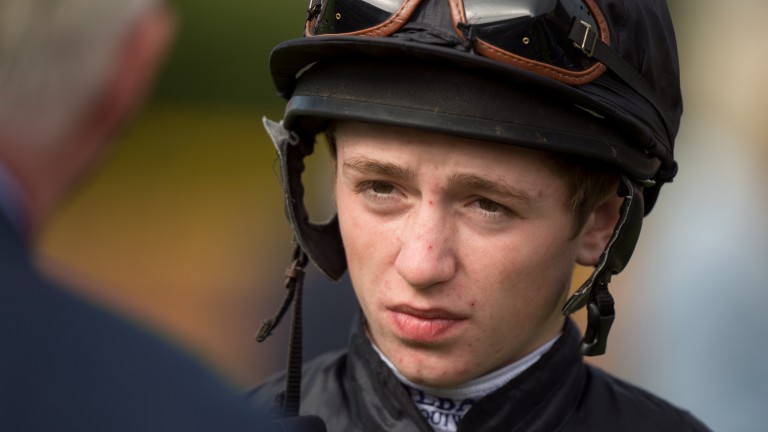 If Cam Hardie thought his luck had changed when Hussar Ballad ended a losing run of 102 rides at Wolverhampton on Friday night then he ought to have known better.

Just two rides later he hit the deck hard when Beatbybeatbybeat clipped heels. Then, having passed the racecourse doctor, he went out an hour later to ride the tricky Grey Destiny for boss Anthony Brittain and received unwarranted Twitter abuse after negotiating a dream passage through the field and getting beaten a short head.

His troubles were not over, however. Not by a long chalk.

Having made his way to Doncaster the following afternoon for one ride, he was sent instead for a CT scan after the jockeys' physio had concerns.

Confessional: was set to be partnered by Cam Hardie but he had to miss the ride
MARTIN LYNCH

The good news is that no serious damage had been done. The bad news is that he spent hours on end in a neck brace on an empty stomach and missed a winning chance – and crucial fees and percentages – in a valuable handicap, Confessional going close in fourth carrying overweight with Hardie's replacement Jamie Gormley.

Reliving his topsy-turvy weekend the former star apprentice, who has found life tough since losing his claim in 2015, said on Sunday: "I've had enough falls to know when I'm injured and, although I know everyone at Doncaster had my best interests at heart, it was a frustrating day, and an expensive one at a time when I could do with every penny.

"I was sore, but the Wolverhampton doctor had checked me over and I'd ridden out seven lots in the morning before arriving at Doncaster, where I was doing light and so had nothing to eat all day.

"The physio wasn't happy with me as I had a cough which hadn't been there before, so she referred me to the doctor, who sent me for a scan because I hadn't had an x-ray and there could be serious consequences if a small fracture had been missed.

"I spent hours in a neck brace, not able to eat still, and at the end of it all there was nothing worse than a bit of bruising to my neck and some impact damage on my lung, which wasn't serious but was causing the cough. It was ten o'clock when I got home, still not having eaten, and it had been a stressful day.

"But if they'd found something at the hospital I'd be on my hands and knees thanking them for sending me."

Mick Appleby: one of a few trainers set to give Hardie rides over the winter
Martin Lynch (racingpost.com/photos)

Hardie, who will get a steady stream of rides from Brittain through the winter and is riding out for top all-weather trainer Mick Appleby and others when he can, has seen his share of social media abuse but does not let it get to him.

"It's just punters letting off steam, I don't worry about it. They don't know what it's like riding bad horses in tight races, where one in front might bleed and you get boxed in with no way out," Hardie added.

"Grey Destiny is a horse, not a machine, and has his own ideas. He needs putting in front on the line and if he wants to start slowly, he'll start slowly.

"They went a good even gallop on Friday and I got a great run through. It was a short head, nose, short head finish, and I thought we might have won, but we were just beaten by an improver winning for the second time in three days. I saw the abuse, and just retweeted it."

FIRST PUBLISHED 3:50PM, OCT 29 2017
I know everyone had my best interests at heart but it was a frustrating day, and an expensive one