Talk of the Tracks LUDLOW MONDAY 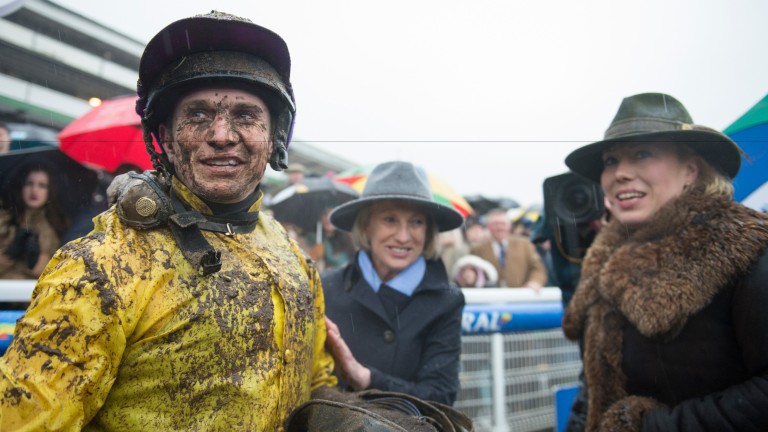 When commentator Stewart Machin asked racegoers "If anyone knows what's going on, please give me a shout", the mixed response of laughter and derision told the tale ahead of the eventful 2m novices’ limited handicap chase.

Gino Trail, partnered by Jamie Moore, who made an eyecatching trip from Sussex for just the one ride instead of heading to Plumpton, bolted over two furlongs past the start, while favourite Roadie Joe, a rare former Grade 2 winner to run at the track, "took a bang" at the post according to his rider Paul Moloney and was subsequently withdrawn.

Hearing the news of the favourite’s omission, Moore and trainer Kerry Lee decided to have one more go at getting the Jan Smith-owned Gino Trail to the start – and the rest is history.

Moore said: "I was just about ready to walk him back to the stables when Kerry told me to give it one more go. We did hear the favourite was withdrawn so we decided I better get back on board!

"I told Kerry to leave the hood off him today and he then bolted with me! He was fine in the race and clearly has a fair bit of ability, but this victory was all down to Kerry – I don’t deserve any credit."

The opening two-runner mares' novices' hurdle will no doubt be a race conditional rider Jack Sherwood remembers after losing his 5lb claim with the 86-length victory of Coillte Lass.

Sherwood, 24, enjoyed festival success aboard Ibis Du Rheu in the Martin Pipe conditional jockeys’ handicap hurdle this year, as well as a Grade 2 victory on Silsol at Wetherby, but has not ridden an easier winner than the Paul Nicholls-trained Coillte Lass, owned by Ditcheat Thoroughbreds, who have now enjoyed six winners from 12 runners.

Sherwood, who has steered seven winners this campaign, said: "It’s going really well this year and the boss (Paul Nicholls) has been a really good supporter. Hopefully I can keep cracking away – it would be nice to beat my season best total of 14."

Simon Sherwood, clerk of the course at the track, was on hand to witness his son’s landmark victory in the opener, and the family theme continued with father and son, Roger and Harry Teal, enjoying success with new recruit Agincourt Reef in the 2m5f handicap hurdle.

Roger Teal bought the seven-year-old out of Gary Moore’s yard for £3,000 at the Ascot sales at the start of the month, and after a promising second at Southwell on debut for the yard, the son of Gold Well ran out a convincing winner on his second visit to the Shropshire track under an enterprising ride from 20-year-old Harry Teal.

Teal snr, who also owns the winner, said: "It was a very good feeling to witness my lad ride such a great tactical race – and to own the horse as well is a bonus!"

Everyone's thoughts and best wishes go to well-known local photographer Les Hurley, who was taken ill at the track during the afternoon.

FIRST PUBLISHED 5:02PM, NOV 28 2016
He was fine in the race and clearly has a fair bit of ability, but this victory was all down to Kerry - I don't deserve any credit