Happy Wednesdays would put a smile on any racing fan's face 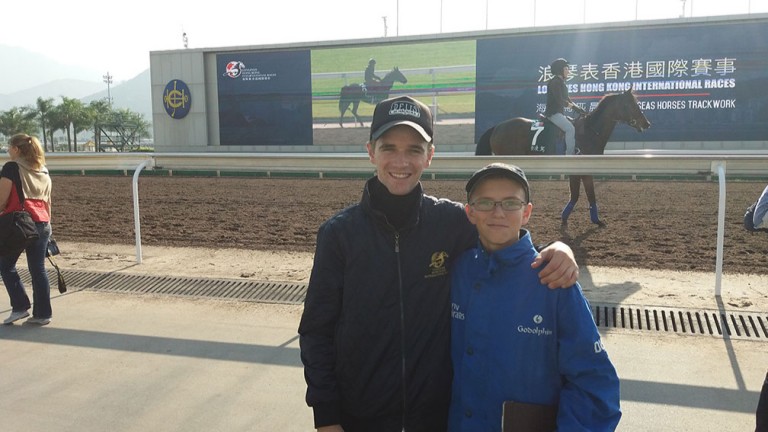 Wednesday evenings are known as Happy Wednesdays in this part of the world and with good reason – it is impossible not to leave Happy Valley grinning from ear to ear.

It is everything British racing is not. It is accessible, in the heart of the city and a short walk from the busy Wan Chai area. On Wednesday night it cost HK$10 to get in. That's one of your pounds and two of your pennies. And it was heaving, with a crowd of 29,601 for the International Jockeys' Championship card – the biggest for the meeting since 1999.

The band came on between races to play singalong covers not that well, fireworks went off for the start of the IJC while horses paraded metres away, and it took less than 30 seconds to acquire a receipt for a beer and then redeem said receipt in an exchange mirroring a drugs buy in The Wire – food queues were slightly longer.

Despite all the attractions the locals' noses could not be tempted out of the form book and everyone punted like lunatics, with a turnover of HK$1.238 billion (£126.7 million) ensuring a riotous atmosphere and a cacophony of noise every time a race was run. You simply must experience it for yourself.

Sprint hope Growl has come almost as far in racing terms this season as the 5,899 miles he has travelled from Richard Fahey's base in North Yorkshire to Sha Tin racecourse in Hong Kong, which would make his draw in stall 12 a sizeable kick in the dangly bits – if he had any.

"There's no point moaning but it's not ideal," was Fahey's matter-of-fact reaction to the draw, before he dreamed up a parallel universe in which it could turn out to be a positive. "We'd have been dropping in anyway, so we'll just have to hope they all try and kill each other for the fence and we can try and pick up the pieces. We do have the US horse [Pure Sensation] alongside us, so hopefully he can take us into the race."

To say Growl worked on Thursday would be overegging things heavily. Horses have been known to do more on parade. "We didn't do too much there," laughed Fahey afterwards. "He just had a light canter, which was grand. We just need to keep him eating and drinking, that's what's important.

"He's got to step up on Sunday but he's come a long way this year. The draw looks like it could be crucial. We wouldn't have come unless we thought we could pick something up, but a lifetime best could see him finish third or fourth and we'd settle for that just now."

When Campbell Rawiller speaks, they listen. Several top jockeys – his father, Group 1 legend Nash, and former champion Australian apprentice turned Group 1 jockey Sam Clipperton among them – believe not many have a firmer understanding of the Hong Kong form book than the 15-year-old who gave himself the morning off school to watch the horses work on Thursday.

He dreams of riding in races one day. Clipperton, who touchingly says Rawiller has become his best friend since he moved here this year, has seen him ride and supportively suggests he's a future champion jockey in waiting. You read it here first!

Given all the many international Group 1 winners on show on Sunday and the young Rawiller's impeccable knowledge of the form book, it might interest you to know the horse he is most looking forward to seeing runs on the undercard – in the 1,600-metre (1m) Eishin Preston Handicap (race ten, 5.50pm local time).

The horse in question is local sensation Pakistan Star and you can read an interview with his rider Matthew Chadwick on the pressures surrounding the ride in Saturday's Racing Post.