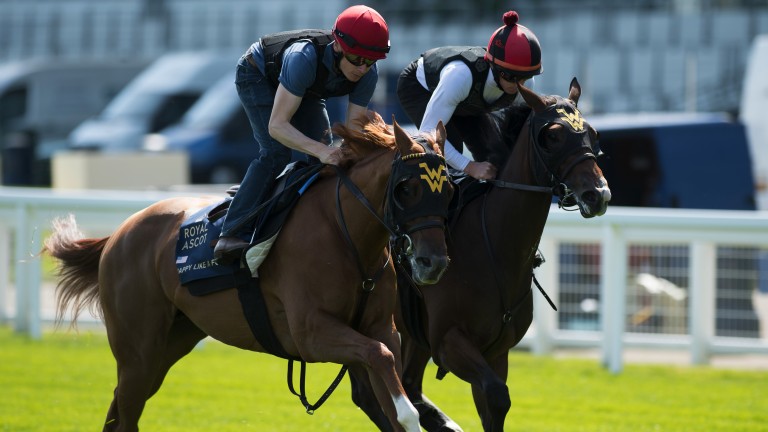 Happy Like A Fool (left) works at Ascot last week in preparation for the Queen Mary
Edward Whitaker (racingpost.com/photos)
1 of 1
By Peter Scargill 9:41AM, JUN 20 2017

Happy Like A Fool looks like filling the 'banker' role at Royal Ascot on Wednesday, with both punters and the Coolmore partners very keen on her chance in the Queen Mary Stakes.

The Wesley Ward-trained filly will be partnered by Ryan Moore after owners Merriebelle Stable sold part of the juvenile to John Magnier, Michael Tabor and Derrick Smith.

She was one of 24 declarations for the Queen Mary and was cut to 6-4 favourite (from 9-4) on Monday to give her trainer a third successive win in the race following Acapulco and Lady Aurelia.

Hayley O'Connor, spokeswoman for Ladbrokes, said: “Wesley has been bullish about Happy Like A Fool's chance of giving him a hat-trick of wins in the Queen Mary. Clearly punters are taking him at his word.”

Coolmore will also be strongly represented in Wednesday’s feature Prince of Wales’s Stakes, with Highland Reel heading a field of nine.

Among his rivals is Jack Hobbs, who like Highland Reel is dropping back in trip, having won the 1m4f Dubai Sheema Classic last time.

The aforementioned Acapulco, who is now a stablemate of Highland Reel, will not run at Royal Ascot this year after a knock ruled her out of the King’s Stand Stakes and Diamond Jubilee Stakes.

Trainer Aidan O’Brien had already discounted the King's Stand and on Monday he took the in-foal mare out of the Diamond Jubilee.

He said: “We decided Acapulco wouldn't be ready to run on Saturday. We'll leave it for another couple of weeks before deciding whether she'll have another race or be retired.”

Another leading lady who will miss the Diamond Jubilee is Quiet Reflection. Last year’s Commonwealth Cup winner has been ruled out until the autumn after a setback.

Trainer Karl Burke reported: “She’s had a slight setback and is not 100 per cent. She’s too good a filly to take a chance with.

"It's not life-threatening, but she won't go to Ascot and won't go to Newmarket [for the July Cup]. I hope we'll get her back for an autumn campaign and go to Haydock and Champions Day.”