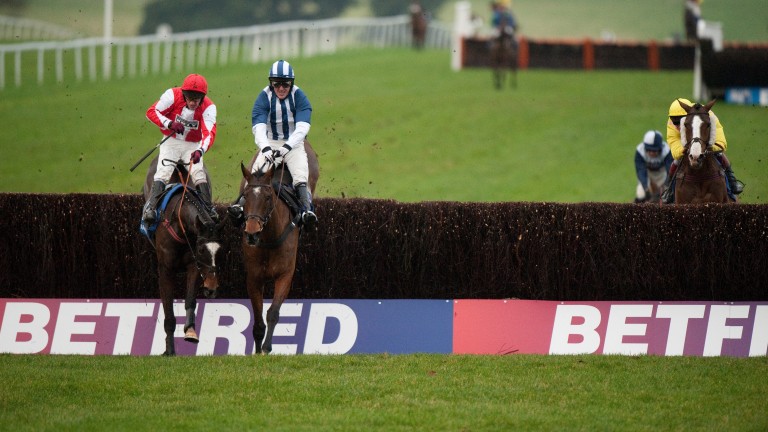 Monbeg Dude (left): the Welsh National was among his greatest moments
Edward Whitaker
1 of 1
By Lewis Porteous 5:22PM, NOV 22 2016

Monbeg Dude, who revelled in the heavy ground at Chepstow when landing a memorable success in the rescheduled 2012 Welsh National, has been retired.

A dour stayer, Monbeg Dude had been off the track since injuring a tendon when finishing third in last year’s Grand National at Aintree and, after a further setback in his recovery, trainer Michael Scudamore has decided to call time on his career.

“He was on the road back and the problem just flared up again,” said Scudamore on Tuesday.

Owned by three former rugby players, James Simpson-Daniel, Nicky Robinson and Mike Tindall, Monbeg Dude will be best remembered for his last-to-first win in the Welsh National under a masterful ride from Paul Carberry.

Scudamore added: “There were so many good days. The Welsh National and the ride from Carberry was great, but he had two wins at Cheltenham, was fourth in a Hennessy and third in the National –and without him we wouldn’t have had the likes of Next Sensation.

“He wasn’t the most athletic or natural but had a massive heart and an even bigger pair of lungs, and he just kept battling and fighting. I doubt anybody would have heard about us without him so we owe him everything.”

Ex-England international Simpson-Daniel was in reflective mood as he looked back on Monbeg Dude’s “amazing story”.

He said: “When Mike Tindall, our bloodstock agent as he likes to call himself, threw his hand up for the horse all those years ago we thought, 'What the hell have we got ourselves in for?'

"But the Dude has taken us to places we could never have dreamed of. We’re three best friends and it’s great being able to share these days with your mates.

“This is a freak story; to spend 12,000gns and have the run we’ve had is something you couldn’t have written. We know we’re extremely lucky. All three of us and Paul Carberry have retired in this window and the main thing is the horse is healthy and can enjoy a happy retirement.”

Simpson-Daniel added: “Just running at Cheltenham was like a World Cup final. Cheltenham is our home turf and to win there was without doubt one of the standout memories.”

Winner of four of his 24 races, Monbeg Dude amassed £261,997 in prize-money and will join Tindall and wife Zara Phillips at their home on the Gatcombe Park estate in Gloucestershire, where he will spend his days with retired eventer Toytown.

FIRST PUBLISHED 1:12PM, NOV 22 2016
Just running at Cheltenham was like a World Cup final. Cheltenham is our home turf and to win there was without doubt one of the standout memories