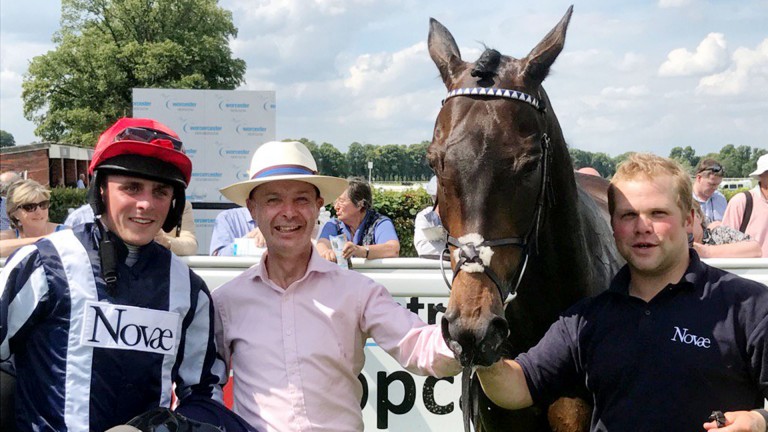 Luke Harvey with jockey Ned Curtis and Drumlynn after their Worcester success
1 of 1
By Peter Scargill 7:16PM, JUN 14 2017

Luke Harvey is set to remain on the owners’ roster at Nicky Henderson’s for a little longer after Drumlynn made the perfect start to his career with a smooth victory at Worcester on Wednesday.

The former jockey, now a presenter on ITV and At The Races, took the plunge last month to put his six-year-old into the capable hands of the champion trainer alongside horses owned by the likes of the Queen and JP McManus.

Harvey, who continues to ride and play a key role in the preparation of his horse, believed the move had paid off with Drumlynn noticeably improving under the watchful eye of Henderson, and so it proved as he surged to a two-length win under jockey Ned Curtis in the 2m conditional and amateur riders’ bumper at Worcester.

Celebrating with a pint of cold lager, Harvey said: "I talk about other people’s horses all the time saying ‘That should win and that should win’ but I get so nervous with my own horse. I knew he was a good horse and going to Nicky’s has unquestionably improved him.

"To do what he did today was absolutely brilliant. It’s hard to put into words how brilliant it is to do the work and see him then go and win.”

Harvey, whose finest hour as a rider came when Cool Ground won the Welsh Grand National in 1990, described his involvement with Henderson’s team as "the best experience of my life".

He said: “I ride him out every day and Nicky’s been absolutely superb. Being involved with these people for the last three weeks or a month has been different class.

“I’m in the bar with all my mates and Nicky has called up to say well done and to tell me everyone at Goffs [sales in Ireland] was cheering the horse on. Mind you, they say I’m the worst owner they’ve ever had as I always want my horse to do something different to the others!"

Drumlynn will remain as part of one of the country’s most powerful stables instead of joining Harvey for an alternative career.

"My first love is pointing and I bought him for that, but he’s too good I’m afraid,” Harvey said.

"I was going to take him home after this and train him for Black Forest Lodge at the start of the next point-to-pointing season but he’s too good for that so he’ll go back to Seven Barrows and we’ll see what he does from there.

“He’s going to be much better when he’s jumping obstacles and he’s a gorgeous horse to look at too. These days are a little bit special and I’m going to enjoy this.”

FIRST PUBLISHED 4:43PM, JUN 14 2017
They say I’m the worst owner they’ve ever had as I always want my horse to do something different to the others!

Surely the only horse Jim Bolger has ever trained that was tougher than him 'I think I probably needed Valium this morning - Ascot with people is amazing' 'Legend' Hooper bags five-timer with a game display at his favourite track Palace Pier v Poetic Flare: which camp are you in for the Sussex Stakes? Leading rider Kevin Stott to miss key rides at Royal Ascot after ankle injury Second royal winner for Hollie Doyle on 33-1 chance Amtiyaz in Copper Horse