Hannon: Barney certainly won't be setting it up for old foe Ulysses 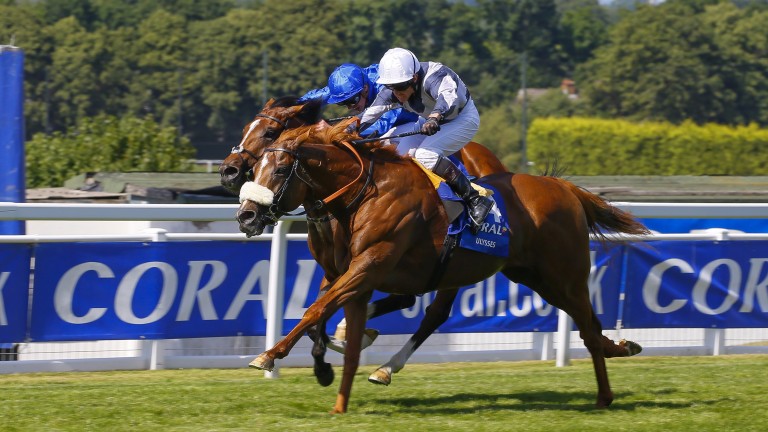 Ulysses (nearest) and Barney Roy do battle in the Eclipse, and the pair meet again on Saturday
Mark Cranham
1 of 1
By Graham Dench UPDATED 10:28AM, OCT 19 2017

The score is two-nil to Ulysses, but Richard Hannon, trainer of Barney Roy, is more than a little hopeful his plan to exact revenge will be rewarded on Saturday in a dazzling Qipco Champion Stakes that he likens to the Arc.

Hannon believes the Juddmonte International fell into the lap of the Sir Michael Stoute-trained four-year-old and insists: "We certainly won't be setting it up for Ulysses this time."

He added: "The Champion Stakes should be about the top, top horses, and that's what it's become.

"The prize-money reflects that and I think Saturday's race is like the Arc, with all the top horses meeting at the end of the year."

There is certainly no doubting the quality of Ulysses and Barney Roy, and while Ulysses has had the better of his rival in the Coral-Eclipse and Juddmonte International there was just a nose between them at Sandown.

But it is the nature of Barney Roy's third at York that has prompted Hannon to put his thinking cap on, as he believes the tactics employed did not show Barney Roy to best advantage. As a result, he will be ridden more patiently on Saturday than on the Knavesmire.

Hannon said: “The general theory is that he did too much at York, although I don't think James [Doyle] did too much wrong and I like the way he decided to do his own thing.

“We got into a battle with Churchill – taking each other on, maybe two and a half furlongs or three furlongs down – and it very much played into the hands of Ulysses."

He added: "I bet Jim Crowley on Ulysses couldn't believe his luck seeing us two scrapping it out two and a half furlongs from home, and he'd have been thinking, 'We'll just wait for you lads to get knackered and then we'll go past’. Other than that our form is very closely tied in with Ulysses and there's not much between us."

A lesson learned then, and Hannon added: "We certainly won't be setting it up for Ulysses this time. We'll get a lead and sit in a little bit. He likes a bit of time between races and goes into Saturday's race in great nick. He's very happy and has done all he needs to do."

Barney Roy, winner of the St James's Palace Stakes, followed his usual pre-race routine by having a day out at Kempton last week, and on Tuesday enjoyed a confidence-boosting strong canter on turf with a lead horse.

His trainer reported: "Today he just did six and a half furlongs with a fast horse rated 90-odd and he gave him about five or six lengths start. He didn't do a lot, but it was a nice confidence-booster.

"He also went to Kempton last week, which he did before the Guineas, the St James's Palace and the Juddmonte. It was just a day out, but James rode him and said he moved great.

"We've got him nice and settled. The whole idea is to get him relaxed in behind, which it looks like he's doing, and he should do that at Ascot too."

Hannon is hoping Barney Roy will stay in training, and if he does he envisages a four-year-old campaign in which the colt's speed will be tested at a mile again and his stamina could be stretched to a mile and a half.

He said: "In a world without Ribchester [the QEII favourite likewise owned by Godolphin] we might well have gone back to a mile after York, but we'll probably start him off at a mile next year in the Lockinge, then we'll have the choice of going either Queen Anne or Prince of Wales's.

"We'll put him in the Arc too. He's proved already he gets a mile and a quarter well. Whether he'll get a mile and a half, we'll see, but if he relaxes he'll give himself every chance."

Barney Roy will be joined at Ascot by stablemates Tupi in the British Champions Sprint and Oh This Is Us, George William and The Grape Escape in the Balmoral Handicap, who all have "live chances", according to Hannon. 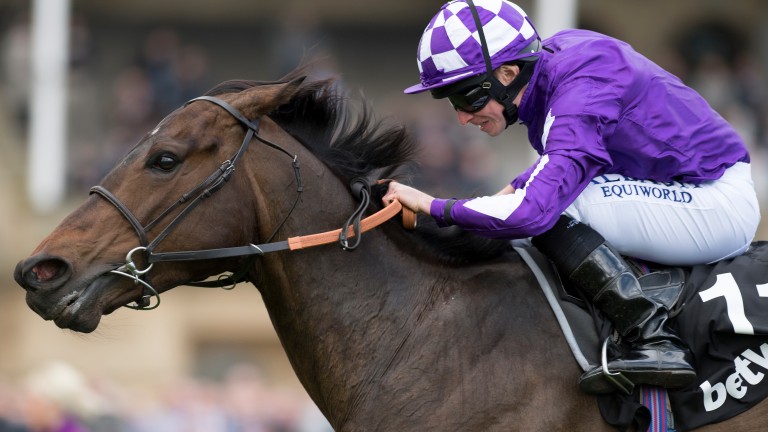 Tupi: runs in the Champions Sprint on Saturday
Edward Whitaker

He said: "Tupi will run so long as it's not soft ground, but he can run anywhere between 90 and 120, so God knows what he’ll do.

"He was brilliant in the Maurice de Gheest when third to Brando, then he was not so good the next time, then ran another super race last time. He's going to Dubai for the winter whatever happens."

Barney Roy is very much the team's flagship horse this year, but while his St James's Palace Stakes win remains the stable's only Group 1 success so far Richard Hannon insists it has been "a great season”.

He said: "We've had 177 winners, which is already more than we had in 2016, and we've found a good horse. That's what we want to do now – to get back to the days when we had horses like Canford Cliffs, Toronado, Sky Lantern, Paco Boy, Toormore and all of those other good ones.

"Like Canford Cliffs, Paco Boy and Toronado, Barney Roy lives in what we call the honeymoon suite, which is two boxes knocked together with Sky and a minibar. When you get one that good, my God you appreciate them. That's where you want to be."

Although the stable lacks a top-flight two-year-old so far this year, Hannon points out that he had only just taken the wraps off Barney Roy at this time in 2016.

"Their season is over come June or July and we’re now looking for the classier types over a mile or maybe a mile and a quarter, who are worth more, earn more, and have much more longevity as racing prospects.

"We haven't yet unearthed a very good two-year-old, but there are still some lovely ones to run, and some nice ones we've already run that will make three-year-olds. I'd like to think there might be another Barney Roy among them."

If orders and sales are a guide, then Hannon's owners are happy with the stable's subtle change in direction.

He revealed: "We've bought something like 108 yearlings and we've got only eight left to sell. They’re selling very well and that's how you can judge what sort of year you've had. We’re clearly doing something right. All in all we've had a very good year, but we'd love to round it off with a nice win in a £1 million-plus race."

*before racing at Kempton Tuesday evening

If you liked this, you may enjoy
Four of the best at Ascot

FIRST PUBLISHED 1:32PM, OCT 17 2017
We got into a battle with Churchill and it very much played into the hands of Ulysses

Rossa Ryan eager to return for biggest ride of career on Mojo Star this weekend 'Hopefully he's not finished yet' - Rohaan continues his remarkable rise Doyle Force: Creative rider off the mark for the week as Appleby bags a 1-2 A day when two big decisions had to be made - officials at Ascot got both right Did the stewards get it right in the Commonwealth Cup? Experts have their say I've seen no sign of a Lance Armstrong - but the thought makes me feel sick