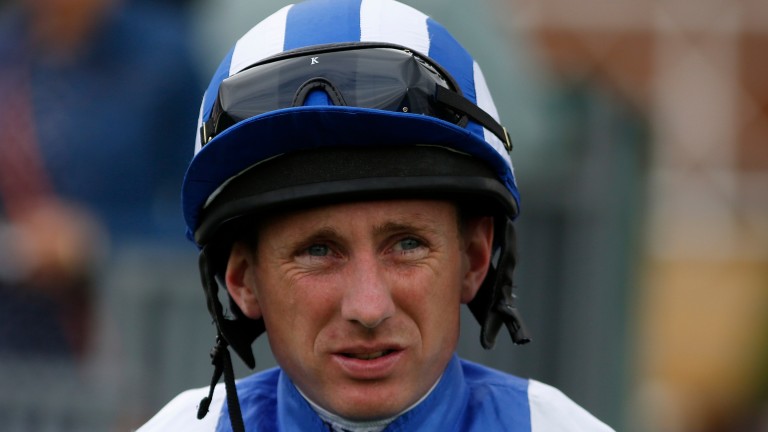 Paul Hanagan has split with leading Flat owner Sheikh Hamdan Al Maktoum after his contract was not renewed.

The former champion jockey's five-year spell in the high-profile role came to a quiet end at Wolverhampton on Friday evening when he was winless from two rides for the owner.

Sheikh Hamdan's racing manager Angus Gold said there had been no discussion about a replacement. Dane O'Neill, who is riding in Dubai, will continue as second jockey.

Hanagan said: "I'm disappointed our partnership has come to an end, but I have to put these things into perspective particularly at this time when my close friend Freddy Tylicki has suffered life-changing injuries. I'm sure I speak for everyone when I say we're all praying for him.

"Thankfully I'm still fit and healthy and I'm enjoying my riding as much as ever. It's too early to say what my plans are for the future, but I'll continue to work as hard as ever and I'm looking forward to meeting the new challenges that lie ahead."

Hanagan, champion in 2010 and 2011, was recruited after the retirement of Richard Hills and enjoyed a banner year in 2014 when he won the Oaks and King George VI and Queen Elizabeth Stakes on the filly Taghrooda and the Eclipse on Mukhadram.

The following year he rode the Charlie Hills-trained Muhaarar to a Group 1 sprint treble with wins in the Darley July Cup, Prix Maurice de Gheest and Qipco British Champions Sprint.

Although 2016 began well when Muarrab won the £800,000 Dubai Golden Shaheen at Meydan but the season in Europe was less rewarding for the jockey. His tally of 73, 51 for his retained owner and only three at Group level, was his lowest score since 2003. Last year Hanagan rode 137 winners, 76 of them in Maktoum colours.

This year's disappointing campaign led to a report in September that he would be replaced by James Doyle at the end of the season. That was dismissed at the time by Sheikh Hamdan, who when asked if Hanagan would continue said: "I hope so." Godolphin said Doyle would stay with Sheikh Mohammed's team despite falling out of favour with Saeed Bin Suroor.

Hanagan added: "I would like to thank Sheikh Hamdan for giving me the opportunity to ride some very special horses, both in Europe and Dubai, over the past five years. I have some great memories particularly of our seven Group 1 wins, two of them on Taghrooda, who gave me my first Classic success in the 2014 Oaks.

"Also I'd like to give a big thank you to all Sheikh Hamdan’s trainers and their staff for the hard work they have put in and I'm very lucky to have met some wonderful people."

Gold described Hanagan as "a very good jockey and an outstanding man" but also acknowledged the challenge he faced in riding for 13 different trainers.

"I'm sure previous retained jockeys will confirm that it's never as easy as people make it out to be, although it always looks glamorous," he said. "Paul did unbelievably well in my opinion, changing location, getting used to a whole lot of new people and applying himself wholeheartedly. He did a fantastic job and was a great work rider. I very much valued his opinion.

"Sheikh Hamdan told me he wasn't going to renew the contract and I haven't seen him since, so we haven't got as far as talking about a replacement yet.

"I imagine Sheikh Hamdan will take his time deciding what he wants to do."

A homebred filly by Sea The Stars, she gave Hanagan his first Classic success when winning the 2014 Oaks. She won her sole start as a juvenile, then at three added the Pretty Polly and Oaks before completing a remarkable treble in the King George & Queen Elizabeth Stakes. Although surprisingly beaten in the Yorkshire Oaks, she ended her career by finishing third to Treve in the Prix de l'Arc de Triomphe.

Excelled at three when dropped back to sprinting by winning his last four races at Group 1 level. Although Dane O'Neill had the ride when he won the Commonwealth Cup, Hanagan partnered him to win the July Cup, the Prix Maurice de Gheest and ended his career with a triumph on Champions Day at Ascot.

Tough sort who regularly competed at the highest level and gained due reward for his efforts when winning what looked a slightly sub-standard 2014 Eclipse and give Hanagan the middle leg of a fine summer treble. Went on to finish third to Taghrooda under Dane O'Neill in the King George three weeks later.