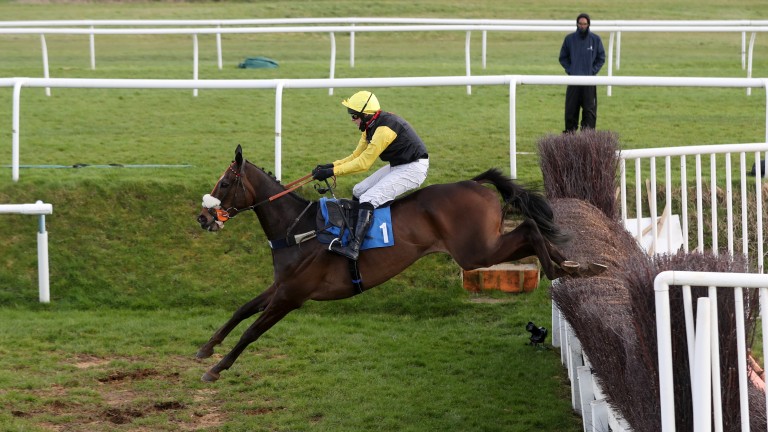 Espoir De Romay: put in an impressive round of jumping to win at Leicester
Getty Images/Pool
1 of 1
By Racing Post staff 6:30PM, MAR 12 2021

Espoir De Romay routed his rivals in the feature 2m4f handicap chase to bring the half century up for Kim Bailey this season and provide a pre-Cheltenham Festival form boost for Royale Pagaille.

The Midgelets-owned seven-year-old finished a seven-length second to Venetia Williams’ stable star at Haydock in December and continued his promising novice chase campaign with a second success from three starts over fences.

Bailey has operated at a 20 per cent strike-rate this campaign and has Imperial Aura, First Flow, Vinndication and Happygolucky among his high-profile runners at the festival next week.

Bailey said on Racing TV: “We’ve had high hopes for him all season and David [Bass] couldn’t believe he got beat at Haydock – look at who beat him!

“It took him a while to get over that but that was a good performance and he has a very big future.

“We’ll assess the options for the rest of the season but he does like cut in the ground and I want to nurture him as he’ll get better with age.”

Old boys to the fore

Midnight Mustang proved age is just a number as the 14-year-old led his rivals home in the 2m4f handicap chase.

Harrison Beswick's mount faced three horses half his age but made all for a fifth success and continued a good month for trainer and farrier Andrew Martin, who landed a Newbury bumper with Charlie's Glance last Saturday.

FIRST PUBLISHED 6:30PM, MAR 12 2021
We've had high hopes for him all season and David [Bass] couldn'’t believe he got beat at Haydock – look at who beat him!