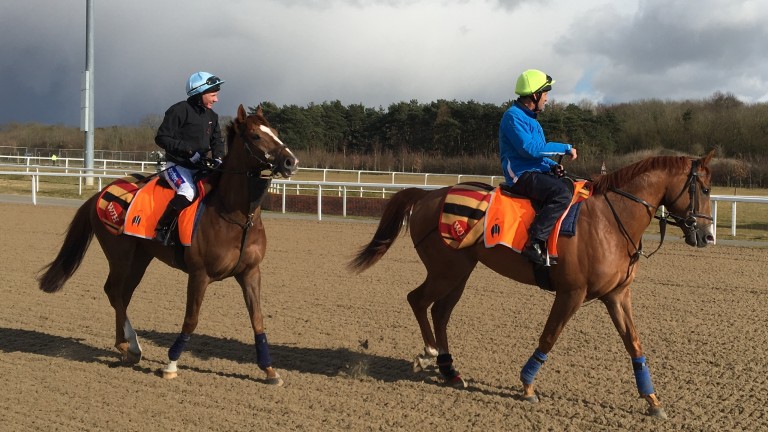 Original Choice (right): has "got a chance" according to York specialist William Haggas
Lewis Porteous
1 of 1
By Stuart Riley UPDATED 7:52PM, MAY 16 2018

William Haggas is famously fond of York. No-one has saddled more winners at the track in the last five years than the Yorkshire-born, Newmarket-based trainer, who started the Dante meeting with two winners yesterday.

In the James Doyle-ridden Original Choice, he has a favourite's chance of adding to his impressive tally.

The four-year-old started his campaign when tenth of 20 in the Spring Mile at Doncaster on soft ground, but put that disappointment behind him to win the Thirsk Hunt Cup – relocated to Wetherby for this year only – by a neck on good to soft.

He has gone up 3lb to a mark of 97 for that but Haggas is hopeful, provided he handles the ground. "He's got a chance," he said. "He's a little bit unknown on the ground, though he's won on it and run well on it, but he didn't handle the heavy at Doncaster and we gave him a good break after that. He won well at Thirsk and we thought we'd give him a whirl on Thursday."

His main market rival is another Newmarket inmate, with Roger Varian's Cape Byron contesting favouritism in some books.

The unexposed four-year-old has to give 3lb to Original Choice but has had his wind done since finishing ninth of 15, eight and a quarter lengths behind Benbatl in a Group 3 at Meydan back in January.

His trainer said: "I'm looking forward to getting him back on quick ground. The course will suit and he has a good draw in stall three – he should run very well."

On his return to handicaps, Varian added: "Cape Byron has trained nicely of late and a mark of 100 looks workable on the form he showed at both Ascot and Chantilly."

That Ascot and Chantilly form includes a neck defeat of Fire Brigade off level weights in a classified stakes and a third, beaten a length and a half, in the Listed Prix le Fabuleux.

Do not let the fact Newmarket trainers dominate the head of the market give you the impression the northern yards are not out in force for this £50,000 prize, which has headed south each of the last two years since Geoff Oldroyd's Alfred Hutchinson was successful in 2015.

Indeed, the winning horse has hailed from a yard south of Birmingham in all but two of the last ten editions, but that could change here with Brian Ellison's recent Chester winner Baraweez ably supported by runners from the Richard Fahey, Mark Johnston and Mick Easterby yards, while David O'Meara is treble-handed. 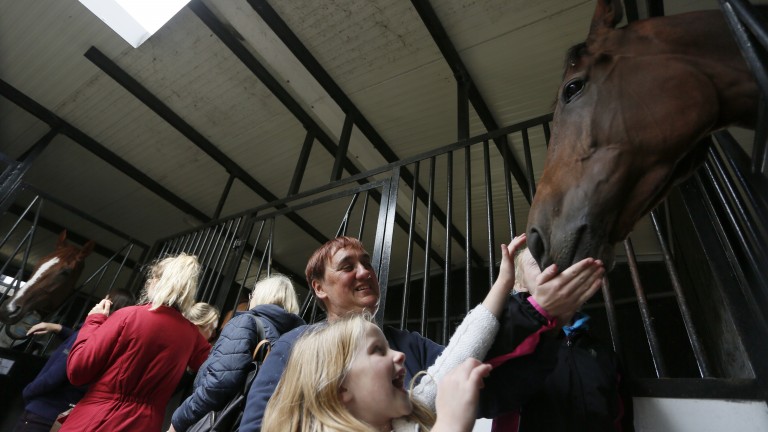 Centre of attention: Baraweez, trained by Brian Ellison, gets a pat from some excited observers
Louise Pollard

Of last week's winner, Ellison said: "He won well and he's gone up 6lb for that, but he gets in here with a 3lb penalty so they've forced my hand a bit really.

"He's come out of it well enough and we're happy with him. Phil [Dennis, jockey] does the weight well and gave him a good ride last time."

Can Afaak bounce back to form?

Charlie Hills saddles Afaak, an Oasis Dream colt out of the yard's 1,000 Guineas winner Ghanaati, while Andrew Balding, who won the race last year with subsequent surprise Group 1 Sussex Stakes hero Here Comes When, is back with Isomer in the same silks of Jim and Fitri Hay.

Afaak, who finished second in the Silver Cambridgeshire to none other than Addeybb – beaten half a length in receipt of 1lb, at the back end of last season – was disappointing on his seasonal return in the Spring Cup at Newbury last month when 12th, but his trainer believes that run was excusable.

He said: "I think the ground was the problem for him at Newbury last time, it wasn't heavy but it was testing and tacky which he didn't seem to handle at all. It'd be nice to get him on some decent ground and he's done a couple of nice bits of work since."

Charlie Johnston, assistant to Mark Johnston, trainer of Love Dreams
He's not short of ability but is not the most consistent horse, either. He went too quickly at Goodwood last time but PJ [McDonald – jockey] gets on well with him and he can hopefully bounce back.

Richard Fahey, trainer of Third Time Lucky
He needs to step up on what he's done so far this season, but he likes his racing and so do the owners. What he did at Newmarket is him.

Third Time Lucky: needs to step up on his form this year
Martin Lynch (racingpost.com/photos)

Andrew Balding, trainer of Isomer
As long as the ground isn't too quick, he'd have every chance. He's probably well treated off 90 on his two-year-old form and he was back to form at Newmarket last time.

David Easterby, assistant to father Mick, trainer of Qaffaal
This was definitely plan B. Unfortunately the horsebox got stuck in traffic for two and a half hours on the way to Chelmsford so we had to turn around and come home. Still it’s very nice to have another runner at York. He'll relish the quick ground and he’s in good heart.

FIRST PUBLISHED 6:00PM, MAY 16 2018
I'm looking forward to getting him back on quick ground, the course will suit and he has a good draw in stall three