Haggas happy as On Her Toes returns with Moore in saddle 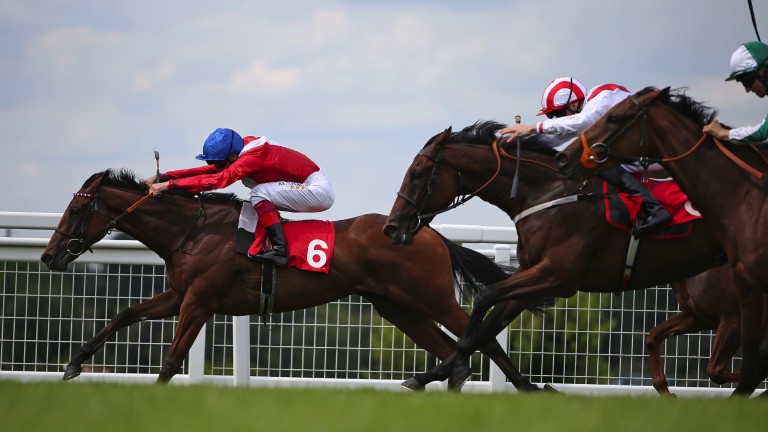 On Her Toes (Frankie Dettori) takes the Listed Star Stakes at Sandown
GETTY IMAGES
1 of 1
By David Jennings 6:00PM, MAY 18 2017

On Her Toes was busy at two, appearing five times and winning three of those between June and July, and here she makes her first start at three with Ryan Moore aboard for the first time.

She has already scored on soft ground at Windsor but has yet to go any further than seven furlongs, so the step up to a mile is an unknown.

On Her Toes tackles some impressive maiden winners. Dancing Breeze opened her account at the first time of asking in impressive fashion at Newmarket last month, while a day later Tomyris did likewise on her second start at the same venue. Both of those look to have bright futures.

Princess De Lune won her maiden at Newbury by further than both of those, however. She scooted four lengths clear of Alnaas and it obviously was not a huge surprise as she was sent off a well-supported 7-2 shot.

Dancing Breeze's Newmarket maiden win has already worked out very nicely. Glittering Jewel, beaten over five lengths into fifth, was second in a hot-looking Ascot maiden next time, while Mouille Point (sixth) and Vice Versa (tenth) have both scored since.

Ryan Moore and William Haggas have teamed up seven times this season, resulting in three victories – a 43 per cent success rate.

Charlie Johnston, assistant trainer of Baileys Showgirl
She was very disappointing on her return at Lingfield but she wasn't quite there at the time and she looks much better now. She seems to be coming to herself and some of her form in France last year certainly entitles her to have a crack at a race like this.

Charlie Hills, trainer of Mulhimatty
She hasn't got a mark so is a bit difficult to place, but she's well-bred and will probably end up being a broodmare at some stage.

William Haggas, trainer of On Her Toes
She's a genuine filly who did very well last year. I'm not sure about the mile or the ground for her but I'm looking forward to seeing how she gets on. She's been off for a long time and it's good to be getting her back out again.

Ralph Beckett, trainer of Sibilance
She’s shown she’s ready for the step up to this grade. She’s shown the trip will be fine, the track should suit her and I think the ground will too.

Roger Varian, trainer of Tomyris
She broke her maiden in quite impressive fashion at Newmarket and she's well worth her place at Listed level. The step up to a mile won’t be a problem on pedigree, although easy ground is a question mark.

FIRST PUBLISHED 6:00PM, MAY 18 2017
She's a genuine filly who did very well last year. I'm not sure about the mile or the ground for her but I'm looking forward to seeing how she gets on