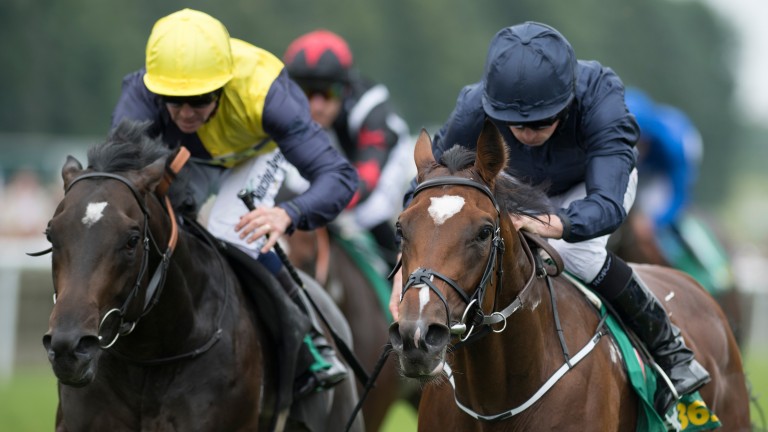 There is already a familiar feel to next year’s Qipco 2,000 Guineas with a short-priced Aidan O’Brien-trained favourite, and we have only just reached the middle of July.

The horse they all have to catch at this stage of the season is Gustav Klimt, who is no bigger than 8-1 for the first Classic of 2018 after showing a wicked turn of foot to capture the Superlative Stakes when all chance seemed to have gone.

It was the manner of the performance, rather than the winning distance, that prompted such a reaction from the bookmakers.

Jockey Ryan Moore had to snatch his mount up when short of room running down the hill, being forced to then switch to the inside of the course for a clear run – all the while quickening after the leader Nebo.

There was only a head between the first and second at the line, but there was little doubting Gustav Klimt had left a lasting impression with his success.

O’Brien said: “I’m delighted with him. Ryan was surprised when he won at the Curragh last time by how he quickened. The plan was always going to be to hold him up and teach him and when he was switched, he took off. You’d have to be happy with him.

“What was impressive was how he quickened as he was going across the course. It very unusual for a horse to be able to do that.”

Gustav Klimt will be given every chance to secure his spot as the leading juvenile at Ballydoyle during the rest of the season, with the Dewhurst Stakes across the Heath at the Rowley Mile his ultimate aim.

“We always thought he was going to be a National Stakes – Dewhurst type and we may think about the Futurity Stakes with him before that,” O’Brien said. “He’s got plenty of speed but you’d hope he’d get a mile – he’s not short of pace.”

Nebo’s trainer Charlie Hills was able to take defeat on the chin given the performance Gustav Klimt had to put in to take victory.

He said: “Nebo had an awful draw in stall one when he was beaten in the Coventry so it was nice to see him bounce back. The winner was obviously very good. We'll look at something like the Richmond or Vintage Stakes at Goodwood."

FIRST PUBLISHED 4:04PM, JUL 15 2017
What was impressive was how he quickened as he was going across the course