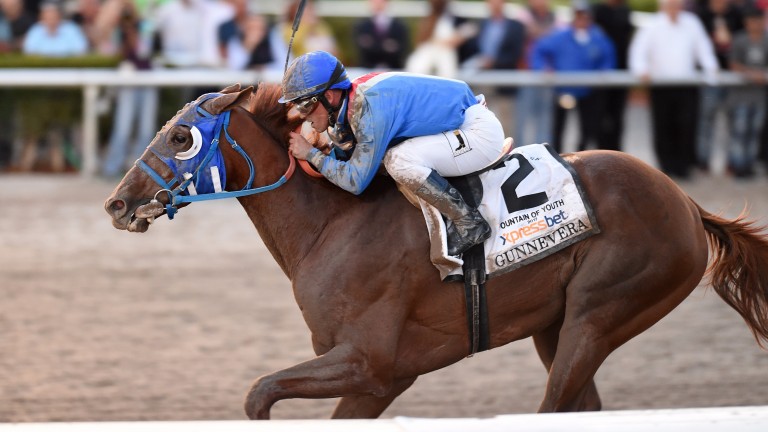 Gunnevera: leading Kentucky Derby hope has the outside gate in the Florida Derby at Gulfstream Park
Lauren King/Gulfstream Park
1 of 1
By Nicholas Godfrey 10:06AM, APR 2 2017

Leading Kentucky Derby contender Gunnevera (Antonio Sano/Javier Castellano) faces the acid test of his Classic credentials as he breaks from the outside post in the $1 million Florida Derby.

In a muddled Kentucky Derby picture, Gunnevera is rated 12-1 second favourite behind McCraken with British bookmakers after overwhelming his rivals to take the Grade 2 Fountain of Youth by nearly six lengths with a come-from-behind victory at this venue four weeks ago.

"The horse started out strong and with the longer distance, he's become stronger and stronger," said trainer Antonio Sano. "We've never been on this stage before, so we're nervous, I'll admit that. But at the same time, we have all the faith in the horse, and I know he's going to take us there."

Although wide draws have a shocking record at this 1m1f trip at Gulfstream, it may not affect Gunnevera as much as it might as he habitually drops in behind his opponents and won't be trying to get anywhere near the lead.

A strong pace aided Gunnevera on his most recent outing, and connections will be hoping for a similar scenario here. "My biggest concern is the pace," added Sano. "There looks like there is less pace in this race than the last one."

Among potential pace-setters are the speedy Three Rules (Jose Pinchin/Luis Saez), back for more after coming third in the Fountain of Youth, and State Of Honor (Mark Casse/Julien Leparoux), who has made the running on his last two starts at Tampa.

Three Rules, though, also has a wide draw in gate ten, one inside the favourite, although they are both likely to move one box nearer the fence as Todd Pletcher is expected to scratch Battalion Runner, leaving highly rated Always Dreaming (John Velazquez) as his sole representative as he bids to win the Florida Derby for the fourth time.

Always Dreaming is stepping right up in grade after winning both three-year-old starts in lesser company.

Hardly the most reliable Kentucky trial over the years, with only two horses – Black Gold (1924) and Grindstone (1996) – ever having won both races.

Front-runner Noble Bird (Mark Casse/Florent Geroux) and Breaking Lucky (Reade Baker/Luis Contreras) return to action for the first time since finishing behind Arrogate in the Pegasus World Cup, where they finished sixth and eighth.

Farrell (Wayne Catalano/Channing Hill), who bids to complete a four-timer in stakes company, tops this $400,000 contest, a significant trial for the Kentucky Oaks having produced six winners since the turn of the century, namely Ashado, Summerly, Proud Spell, Rachel Alexandra, Believe You Can and Untapable.

Celestine (Christophe Clement/Jose Ortiz), bought for $2.55m by Moyglare at the Keeneland November Sale, made an impressive start to her five-year-old campaign when making all to beat fellow Grade 1 winner Catch A Glimpse a month ago over course and distance.

Tequilita (Michael Matz/Luis Saez), who took her winning streak to three in the Grade 2 Forward Gal on February 4, is the only stakes winner in this Kentucky Oaks trial. Nonna Bella (Todd Pletcher/John Velazquez) has won two at this venue over the winter.

FIRST PUBLISHED 6:39PM, MAR 31 2017
The horse started out strong and with the longer distance, he's become stronger and stronger