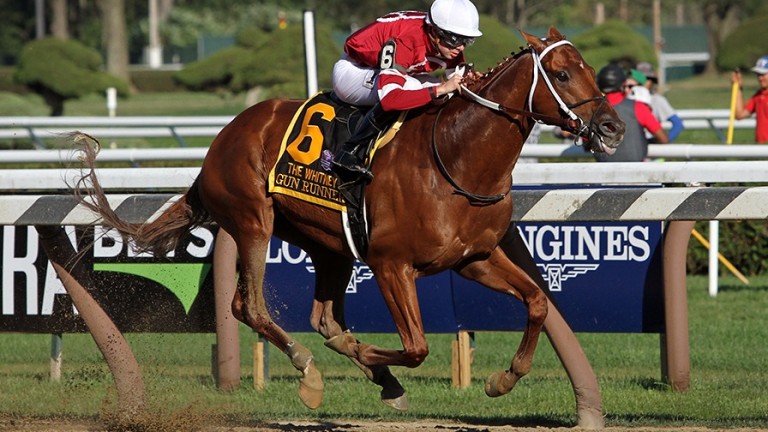 He had won the Grade 1 Whitney Stakes at the New York track by five and a quarter lengths last month and he doubled that margin as he bolted up by ten and a half lengths in the Woodward Stakes.

"My horse broke so sharp I could pretty much do anything I wanted with him," said jockey Florent Geroux.

"From the three-eighths pole I just knew it was a matter of how many lengths I was going to win by.

"That was better than the Whitney; stronger, faster. Overall, he is just getting better and I don't think he is 100 per cent cranked up yet. I really do think he has another step forward with him."

Winning trainer Steve Asmussen added: "He stepped up. This was our last race heading into the Breeders' Cup and I thought it went as well as we could have hoped.

"I think everything culminates with the Breeders' Cup Classic. That's why he is in training this year, that has been the goal, and continues to be the goal."

Gun Runner, who went off the 7-20 favourite to beat his four rivals in the Woodward, was beaten two and a quarter lengths at Meydan by Arrogate but is now favourite for the Breeders' Cup Classic – Coral and Betway best priced at 15-8 – after the World Cup winner's two recent defeats.

Lady Ivanka earned a place in the Breeders' Cup Juvenile Fillies with victory in the Grade 1 Spinaway Stakes on the same card and she is likely to face the Simon Callaghan-trained Moonshine Memories, who staked her claim for the same race by landing the Grade 1 Del Mar Debutante Stakes in California.

FIRST PUBLISHED 9:29AM, SEP 3 2017
I don't think he is 100 percent cranked up yet. I really do think he has another step forward with him