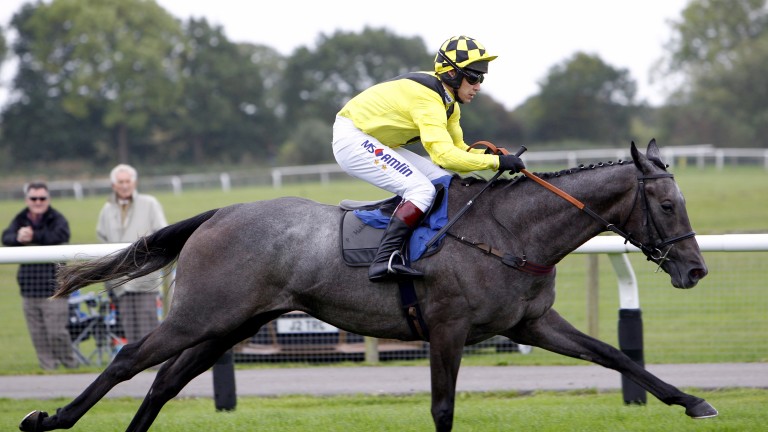 Gumball bids to extend his winning run at Cheltenham on Saturday
Steve Davies
1 of 1
By Richard Birch 12:55PM, NOV 18 2017

That smart performer went on to win his next five races, including the Grade 1 Triumph Hurdle, and is one of the most exciting young hurdlers in training.

Hobbs, who also landed the race in 2014 with Golden Doyen, this time saddles likely warm favourite Gumball, unbeaten in two starts for the trainer at Stratford and Chepstow, and clearly a very useful recruit.

The manner in which he pulled away from Malaya and Speedo Boy, who reopposes here, at Chepstow was impressive, and Hobbs said: “He has been in very good form since Chepstow and I hope he runs well.”

Speedo Boy won on his next start after Chepstow and, while the bare form gives him something to find in a race of this nature, he could be progressive.

Trainer Ian Williams said: “We’re probably tilting at windmills but his Flat ability hasn’t shone through into jumps races as yet. I'm sure it will when he gets the hang of it.”

Apple's Shakira, who races in the colours of Defi Du Seuil’s owner JP McManus, is a sister to Apple’s Jade.

She won a hurdle race in France comfortably before joining Nicky Henderson and rates an interesting prospect.

Star hurdlers clash over fences for the first time

The mallardjewellers.com Novices’ Chase (1.15), won by subsequent King George VI Chase hero Thistlecrack last year, may have attracted only three runners – one of whom, West Approach, is a half brother to Thistlecrack – but it still looks a cracker.

Ballyoptic, winner of an Aintree Grade 1 hurdle in April 2016, made a sparkling debut over fences when breezing home five lengths clear of Elegant Escape at Exeter this month.

His performance impressed rider Sam Twiston-Davies, who misses out this time owing to a broken elbow, and there appears every chance Ballyoptic could prove every bit as good over fences as he was at hurdling - and maybe better.

Trainer Nigel Twiston-Davies said: “He did a very good job first time over fences and should run very well again.”

West Approach, in receipt of 3lb from Ballyoptic who he finished six lengths in front of when in receipt of 2lb in last season's Cleeve Hurdle – the only time in their three meetings over hurdles either managed to finish, is another who could take high rank in the staying novice chase division this season.

The seven-year-old made an excellent start to his new career when staying on strongly to slam Jameson by nine lengths in the Ffos Las mud last month.

“I thought Ballyoptic looked very good at Exeter but West Approach was rated 157 over hurdles, which makes him as a good as any of these. He won well enough at Ffos Las,” said trainer Colin Tizzard.

Black Corton, winner of five of his seven races over fences, bids for a five-timer after triumphs at Worcester, Fontwell, Newton Abbot and Cheltenham.

Trainer Paul Nicholls said: “He keeps on improving and he keeps on winning, although he was a fortuitous winner last time. These are the best horses he's taken on so he has it all to do, but he’s in good shape.”