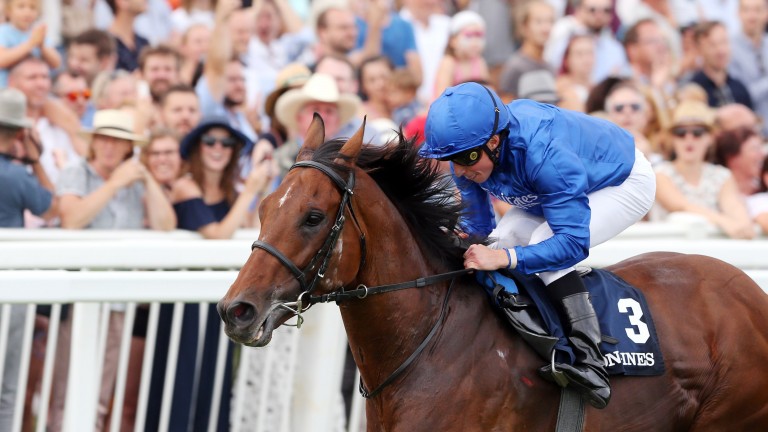 Godolphin’s Ghaiyyath will be very much the focus of attention at Meydan’s eighth meeting of the 2020 Dubai World Cup Carnival on Thursday when facing five rivals on his local debut in the Group 3 Dubai Millennium Stakes over 1m2f on turf (2.30).

Officially rated 126 after destroying eight rivals by 14 lengths and more in the Group 1 Grosser Preis von Baden at Baden-Baden on his penultimate start, he then disappointed in the Prix de l’Arc de Triomphe when arguably encouraged to work too hard to get an early lead in testing conditions.

He has been rested since with the 1m4f Group 1 Sheema Classic on the Dubai World Cup card (March 28) considered his main early season target. The mount of William Buick, he is trained by Charlie Appleby, as is Spotify, winner of this race last year and again to be ridden by James Doyle.

Appleby, the most successful carnival trainer in each of the last two years and leading the way again with 12 winners, said: “This race is five weeks before the big night so it is an ideal opportunity to get a run into him with plenty of time to then freshen him up.

“He wintered in Dubai last year so has settled into the routine and should run well but will improve for the outing.

“Spotify has had a nice break, goes well fresh and these are probably his optimum conditions. He should go close.”

Ghaiyyath has a Group 1 penalty, as does David Simcock’s Desert Encounter, victorious in the two most recent renewals of the Grade 1 Canadian International at Woodbine.

He has been off since the most recent one in October but did finish last season with four consecutive victories.

Also on turf, the official feature is the Group 2 Zabeel Mile (4.15) in which Appleby and Buick will try and repeat last year's success with Mythical Magic. As was the case 12 months ago, Buick’s mount arrives here having chased home a stablemate in the 7f Group 2 Al Fahidi Fort.

Appleby is also represented by Zakouski, who was very impressive on his local debut and just third racecourse appearance in a course and distance handicap six weeks ago. He could be the main danger under James Doyle.

Appleby said: “Mythical Magic won this well last year and we were very pleased with his comeback so expect another big run.

“Zakouski deserves this step up in class which is going to tell us a lot about him.”

Again on turf, Charlie Hills saddles Equilateral in the 5f Group 2 Meydan Sprint (4.50), the same course and distance over which he and Doyle easily won the Dubai Dash, a Listed handicap, four weeks ago.

That was his local debut, first start since being gelded and a performance which strongly suggested he is ready to take order in the higher echelons of the sprinting ranks.

Hills said: “This horse just took to Dubai from the moment he climbed off the plane and really settled in well.

“That was a very good effort last time and we are hoping for more of the same back up in class.”

The dirt feature, over an extended 1m1f, is the Group 3 UAE Oaks (3.40) for the three-year-old fillies and in which Saeed bin Suroor is seeking an eleventh victory.

He relies on UAE 1,000 Guineas heroine Dubai Love in a race featuring a fascinating Japanese challenger with Yutaka Take in town to ride Serein for Mikio Matsunaga.

FIRST PUBLISHED 6:00PM, FEB 19 2020
This race is five weeks before World Cup night so it is an ideal opportunity to get a run into him with plenty of time to then freshen him up