'If any horse can do it, he can' - Karl Burke on unraced Ascot gamble Kaboo

Royal Ascot day two: everything you need to know before Wednesday's card 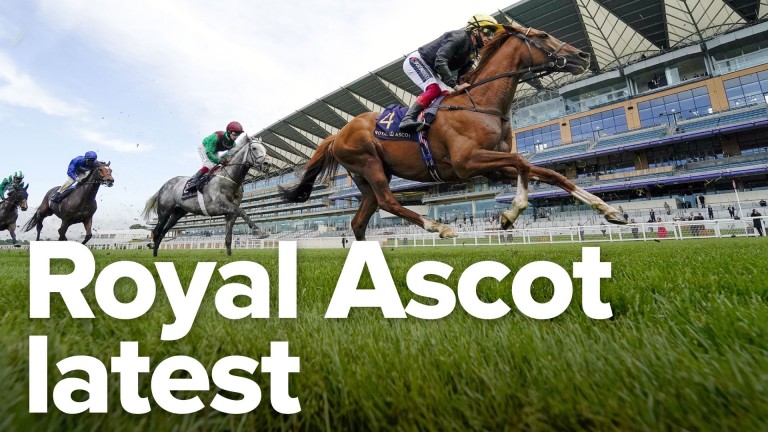 Your one-stop shop for Royal Ascot news on Wednesday

The monster gamble on unraced juvenile Kaboo in the Windsor Castle Stakes (5.35) shows no sign of abating with the colt now as low as 9-2, having been a 66-1 chance on Tuesday.

Owned by Nick Bradley Racing, whose 66-1 shot Eldrickjones finished second in Tuesday's Coventry, the Karl Burke-trained two-year-old's price has shortened throughout the day, with the best-priced 6-1 now under threat.

Speaking to the Racing Post, Burke said: "He's potentially a very exciting horse. I've only had him three weeks since the Arqana Breeze-Up and he came very highly recommended by his vendors, Kate McGivern and Joanna Morgan.

"He's a very powerful and a good galloping horse who has a big future. This is obviously a huge ask, but if any horse can do it, this fella can."

The most recent newcomer to win at Royal Ascot came in the same race when Dazzle was successful in 1996.

Reacting to the gamble, Paddy Power spokesman Paul Binfield said: "There's been a significant move for Kaboo, who is into 6-1 from 66-1 yesterday and 100-1 ante-post. He has yet to exhibit his talents in public and we wish punters who have back him all the best, but it wouldn't be the worst result for us, especially given Frankie Dettori rides the favourite Ruthin."

Kaboo's trainer and owners are no strangers to two-year-old success at the royal meeting having won last year's Albany Stakes with Dandalla.

John and Thady Gosden may have lost their best chance on day two following Lord North's withdrawal from the Prince of Wales's Stakes, but they have strengthened their grip on the Royal Hunt Cup (5.00) with Haqeeqy coming in for strong support.

The Lincoln winner is challenging for favouritism in the day's big betting race after his price was cut to a general 7-1 (from 10).

He has joined stablemate Magical Morning at the head of the market with some firms, while the Sir Michael Stoute-trained Astro King has also been shorted to 7-1 (from 10).

Dreamloper, who is likely to relish the fast conditions, has come in for sustained support for the Kensington Palace Stakes (6.10), with her price now 4-1 generally (from 11-2).

Non-runners: Lord North out of Prince of Wales's

Day two of Royal Ascot has lost one of its star performers after Lord North was declared a non-runner in the Prince of Wales's Stakes (4.20) due to the ground.

Lord North, winner of the Group 1 last year, had been poised to take on Ballydoyle pair Love and Armory, but connections made the late decision not to run on ground described as good to firm.

Joint-trainer John Gosden said: "The ground will be too quick for Lord North and, unfortunately, he's a non-runner in the Prince of Wales's Stakes."

In his absence, Love has been made odds-on favourite at 5-6 generally with Armory priced at 5-2 and Audarya next best at 9-1.

Lord North was last seen in action winning the Dubai Turf at Meydan in March. He finished with blood in his mouth that day – something Gosden put down to the five-year-old banging his head on the gate.

Lord North holds an entry in next month's Coral-Eclipse at Sandown, a race under consideration for stablemate Mishriff.

The Prince of Wales's had been billed as one of the races of the week with Lord North setting star filly Love a stern test on her first start of the season and first time outside of her own sex.

A brilliant winner of last year's 1,000 Guineas and Oaks, Love is likely to still need to be near the top of her game against stablemate Armory, who was second in last year's Cox Plate and an impressive winner of the Huxley Stakes on his comeback.

Hollie Doyle rides: can she add another big-priced winner to her tally?

Elsewhere, Tipperary Sunset, a leading contender for the Windsor Castle after winning the Two Year Old Trophy at Beverley last time, has also been taken out on account of the ground.

The Charlie Fellowes-trained Eve Lodge misses the Queen Mary Stakes (2.30) due to the going too, joining early withdrawals Zinc White (3.05) and Bounce The Blues (3.40).

The ground for day two of the royal meeting remains good to firm following a dry night in Berkshire.

It is forecast to stay dry and warm in the day with thunderstorms during the night and through Thursday and Friday.

The going was changed to good to firm (from good to firm, good in places) after race four – the St James's Palace Stakes – on Tuesday and the whole track was watered with 4mm after racing.

ITV Racing tips: one key runner from each race on ITV on day two

Speaking after racing on Tuesday, clerk of the course Chris Stickels said: "I'm pleased with the way today has gone and we anticipate very similar conditions tomorrow.

"It does look like we are in for an unsettled period with some thunderstorms on Wednesday night and through Thursday and Friday; it's a bit changeable and unpredictable at the moment. But we need to keep the ground safe, and just replacing the moisture lost today is the right thing to do."

Get ready for the action before the storm!

The opening day victory on Reshoun in the Ascot Stakes (5.00) came at a cost for William Buick, who was given an 11-day suspension and a fine of £1,150 for his use of the whip.

Leading trainer Ger Lyons says he has not witnessed illegal drug use but backed Jim Bolger after the legendary handler claimed "there will be a Lance Armstrong in Irish racing" – a suggestion that has prompted the IHRB to defend its anti-doping approach.

Battaash will be prepared for a tilt at winning a fifth King George Stakes at Goodwood next month with trainer Charlie Hills believing a lack of a prep run caught his star sprinter out in the closing stages of the King's Stand Stakes.

FIRST PUBLISHED 8:03AM, JUN 16 2021
He's a very powerful and a good galloping horse who has a big future