Grendisar seeking to step up championship defence in Listed event 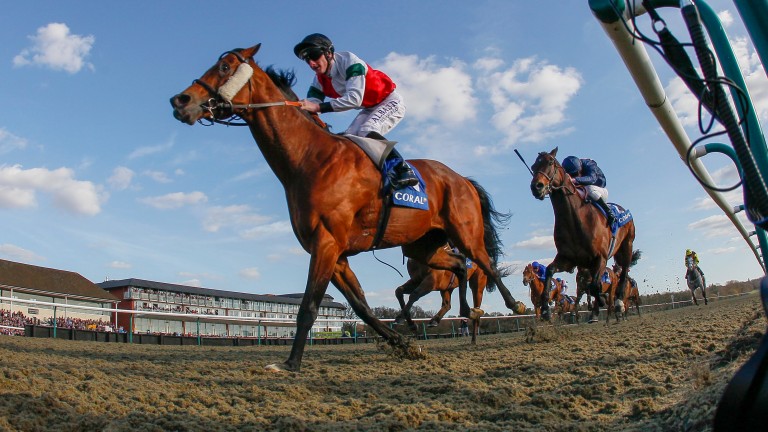 Grendisar is seeking to step up the defence of his all-weather middle distance championship title with a good display in this Listed contest, a race he won two years ago, while he finished a neck second in last year's renewal.

The son of Invincible Spirit, trained by Marco Botti, has since been bought by Middleham Park Racing and finished an encouraging fourth on his first start for the new owners over course and distance in the Churchill Stakes last month.

Avoid pacesetters
This has not been a successful race for front runners, and the last horse to lead from start to finish was Gentleman's Deal for Mick Easterby in 2007.

Side with the older horses
Fifteen three year olds have taken their chance in the last eight runnings, with none of them returning successful. Dubai Fashion is the only three year old in the line-up.

Jamie Osborne, trainer of Battalion
Battalion is in good form. Clearly, on official numbers he has a bit to find with both Grendisar and Educate, but he was pretty good around Lingfield the other day. You would expect him to have some sort of chance. We have decided to keep him here through the winter rather than go out to Dubai. The Betway Easter Classic is the target and he will go for the big 10-furlong races along the way.

Ismail Mohammed, trainer of Educate
He's come out of his last race in good form. Grendisar will clearly come on for the run and he looks the horse to beat. If he runs the same solid race that he always does he can be bang there again.

Simon Dow, trainer of Forceful Appeal
It's a massive step up - more like a leap - but there's no purpose in hiding him away. The horses are on a roll and he's up a few pounds but he could well get in the prize-money.

Tom Palin, racing manager of Middleham Park, owners of Grendisar
He's in good form. He's a little older now and takes a little bit longer to get fit and he needed his first start, which we were not disheartened by. This was always the plan since that race and the ultimate aim is to get back to the finals where he has a championship to defend.

Saeed bin Suroor, trainer of Dubai Fashion
She's a consistent filly with a nice record. She was placed in a stakes race last time and we're hopeful she can take the next step.

FIRST PUBLISHED 6:00PM, DEC 16 2016
This was always the plan since that race and the ultimate aim is to get back to the finals where he has a championship to defend