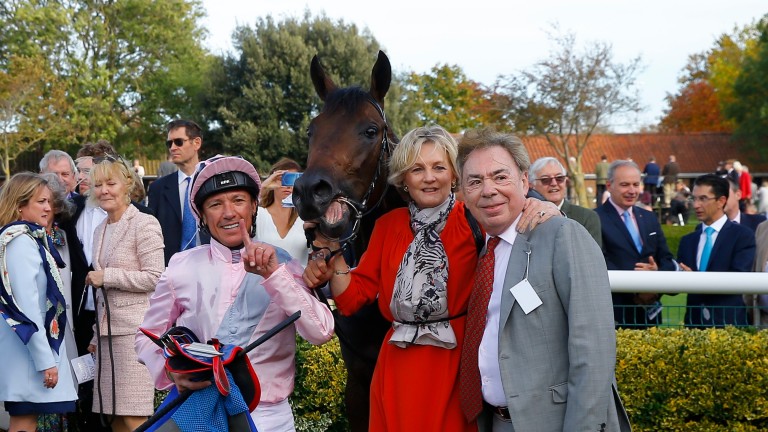 Frankie Dettori and the Watership Down Stud team of Lord and Lady Lloyd-Webber celebrate a win for Too Darn Hot
Mark Cranham (racingpost.com/photos)
1 of 1
5:37PM, FEB 14 2019

Newbury racecourse has announced the signing of a three-year deal with Watership Down Stud which will, from this year, sponsor the Group 3 Greenham Stakes.

The Classic trial, which will be run on April 13, has been earmarked as the starting point for Qipqo 2,000 Guineas favourite Too Darn Hot – a product of the Watership Down breeding operation.

Too Darn Hot will attempt to become the first horse since Frankel to win the Greenham and the 2,000 Guineas.

Kempton has been fined £3,500 after trainer Jon Scargill found feed pellets from a previous meeting on the floor of the box his horse Cherbourg was allocated at a fixture on January 15.

The fine from the BHA disciplinary panel was issued for failing to comply with the requirements of the general instructions relating to the hygiene, cleaning and use of racecourse stables.

The Newmarket trainer had said of the matter: "The feed was in the middle of the floor so it hadn't been swept properly. If it was the only time it has happened then I was just very unlucky, but it wasn't done properly.

"It turns out this box hadn't been used for a week so my horse has eaten food that has been lying on the floor for a week, which isn't good."

The BHA has announced that Towcester’s fixture on March 14 has been moved to Market Rasen.

The afternoon fixture will be a six-race card, with race programme details and further fixture information available via the Racing Admin website www2.racingadmin.co.uk in due course. Entry and declaration deadlines will remain as previously.

The BHA is continuing to work with Towcester’s new owners regarding the longer-term status of the course. Any formal proposal will require due consideration and an update will be provided by either the BHA or Towcester’s owners as soon as appropriate.