Greatrex: Ryder is as good as I have had him for this race 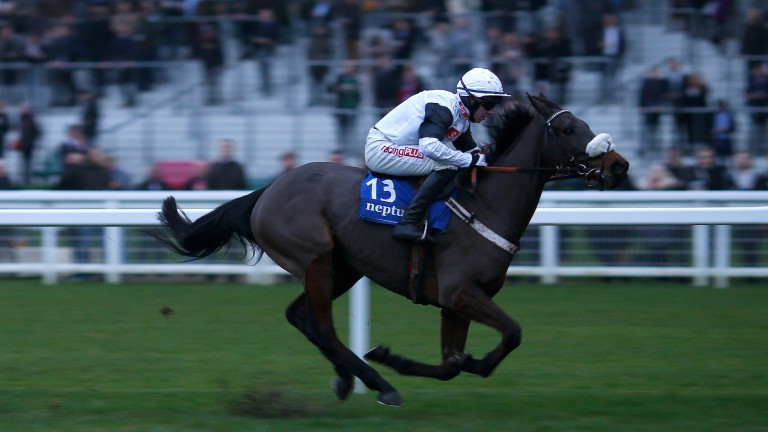 Western Ryder made it two wins from three starts at Ascot in December
Alan Crowhurst
1 of 1
By Scott Burton 5:14PM, FEB 10 2017

Regular attendees at this meeting will need little persuasion to stay on for the concluding bumper, a race whose roll of honour is littered with the earliest glimpses of future star names.

12 months ago Ballyandy warmed up for success in the Weatherbys Champion Bumper with victory in this race, while Barters Hill, Shutthefrontdoor, Mad Max and Al Ferof have all gone on to much bigger things after landing this prize during the last decade.

Western Ryder is a general 25-1 chance for festival honours, a price which could look generous should he successfully concede a 4lb penalty to his rivals for a Listed win at Ascot in December.

Trainer Warren Greatrex said: "It’s going to be hard. He is progressing and has definitely come on since Ascot. The soft conditions will be fine and, although everyone knows it is hard to win with penalties in these races he is as good as I have had him yet."

Nicky Henderson saddles the only filly in the race in Daphne Du Clos, who didn't get a clear run last month when beaten narrowly on her first start since arriving from France.

"I like her and she ran a very good race at Cheltenham where she just failed to get up," said Henderson. "It’s a grown-up race but she is a filly so I’d love to get some black type for her."

Robbie McNamara saddles his first runner in Britain in Cosmo's Moon, who offers an early chance to measure the relative merits of Irish and British bumper form, having finished fifth at Naas on debut when starting the well-supported second favourite.

An SP of 50-1 told the opposite story about Point Of Principle on his first start at Warwick but Tim Vaughan's four-year-old - who failed to reach the track when trained by Sir Michael Stoute for the Coolmore partners - put in a polished display to score by a length.

"He has a nice pedigree and has come out of Warwick like a dream after winning nicely," said Vaughan. "We don't know if he'll cope with the step up in grade but he handled the soft ground and seemed to do all his best work late on at Warwick. Newbury is a stiff test and we're hoping for a nice run."

Point Of Principle is one of five among the 11-runner field who arrive here on the back of a single winning start.

Scoop6 players in for long wait

Scoop6 players will have to keep watching after ITV4 coverage has finished if they are still in with a chance of landing the prize.

With small fields a feature of the main action on Saturday, the last two legs of the Totepool bet are the 4.45 at Newbury, a bumper, and the 4.55 at Warwick, a handicap hurdle, both of which will be shown solely on Racing UK.

Totepool marketing manager Adam Smith said: "Newbury’s Super Saturday has some real stars on show and the potential of scooping an estimated win fund of £100,000 is sure to warm the hearts with Valentine’s Day just around corner.”

Totepool also reminded players of a rule change. If any Scoop6 leg is not run, the win fund is now made up solely of money invested on the day. Any money carried forward from previous rollovers will not be played for.

The Tote jackpot is made up of the first six races at Newbury while the Betfair Hurdle (3.35 Newbury) is the Tote trifecta rollover race.

FIRST PUBLISHED 6:00PM, FEB 10 2017
It’s going to be hard but he is progressing and has definitely come on since Ascot