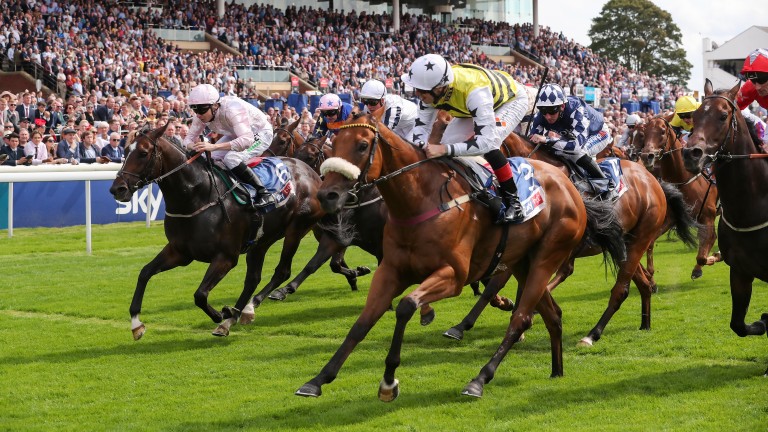 Connor Beasley and Dakota Gold proved once again they are a match made in heaven with a decisive win in the opening race of the Ebor festival.

Cut from the same cloth, both have overcome serious injury in their careers but have come back better than ever.

Just four days after scooping the Great St Wilfrid as a 5-1 favourite under Beasley, Dakota Gold was again well backed into 4-1 favouritism and kept the rider in the spotlight with another speed show that had their sprint rivals toiling in the 5½f handicap.

For Beasley, Dakota Gold is just the horse he has been waiting for since returning from career-threatening injuries in 2016 after a fall at Wolverhampton the previous year. He suffered a fractured skull, neck and back, not to mention losing half an ear and being left with a mouthful of broken teeth.

Yet against the odds he has returned as strong as ever and while the last three years have not been without success, Dakota Gold is the one he has been searching for.

"Every jockey needs horses like this to get them on to the next level and luckily I've landed on this feller," said the rider. "The governor, Michael Dods, and the owners have been great to support me and keep me on him and I can only thank them.

"I've served all my service with Michael and he's been supportive all the way through my career."

Dakota Gold has also fought his way back from injury after his career, never mind season, looked in jeopardy at the start of the year.

"He cut a leg at the end of January and the vets have done a great job as we didn't know if he'd race again," explained Dods. "He stood in a box for two months but has overcome that and come back better than ever. Connor gets on great with him and it's great for him."

Next stop for horse and jockey is the Ayr Gold Cup before Beasley jets off to Dubai for the winter having scored 32 winners there last season. For he and Dakota Gold, things are very much on the up.

FIRST PUBLISHED 2:08PM, AUG 21 2019
He's a good horse and will step up to Listed class eventually