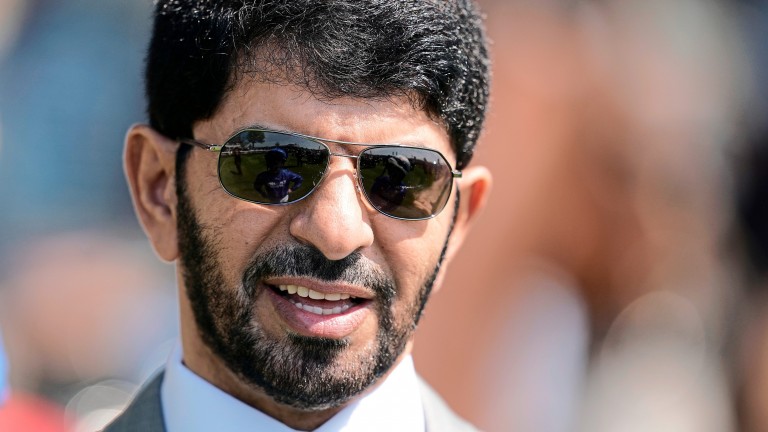 Four-time champion trainer Saeed bin Suroor registered his first victory of the domestic season on turf when Great News made a successful debut under Oisin Murphy.

The Shamardal colt travelled powerfully before finishing off his race with authority to take the first division of the 7f novice for three-year-olds.

"He's a nice, strong colt who has been working well, and he won nicely," said Bin Suroor. "I'm sure he'll improve for the run and although he has plenty of speed, I'd like to see if he can go further, and we might look at going over a mile."

The Godolphin trainer, who recorded his first British winner of the year at Chelmsford on Thursday evening, has only just started fielding runners in greater numbers after a quiet start to the season.

"I went to Doncaster yesterday and I was a little disappointed because some of them needed the race," he said. "At this time of year, it's hard to find the right gallop at Newmarket and you have to run some of them to get them fit.

"We trained the three-year-olds in Dubai and have brought them back and we'll run them in their class. We're looking forward to a good season."

Murphy doubled his tally by winning the 1m6f handicap on the Hughie Morrison-trained Sulochana.

Ralph Beckett registered a 19-1 treble on the card, with in-form jockey Hector Crouch partnering two of the trainer's winners.

Crouch, who is making the most of his opportunities with Beckett, won the 5f novice contest on Angel Bleu and the 1m4f handicap on Brasca, while Rossa Ryan brought up the middle leg on Serena's Queen in division two of the 7f novice for three-year-olds.

First for the season

Trainer Patrick Chamings got off the mark for 2021 courtesy of Amathus, who denied favourite Lordsbridge Boy by a nose in the 6f handicap.

The David Henery-owned four-year-old was a surprise winner at 14-1, although not to the extent of his only previous victory when causing an 80-1 shock at Windsor last June.

FIRST PUBLISHED 6:20PM, APR 25 2021
I'm sure he'll improve for the run and although he has plenty of speed, I'd like to see if he can go further

'I think I probably needed Valium this morning - Ascot with people is amazing' 'Special' Berkshire Shadow lands long-running gamble for ecstatic connections Oisin Murphy flying ahead of Royal Ascot as treble draws him level in title race 'It's been a great week' - Charlie Appleby's amazing run of success continues Royal approval: King's Lynn and Oisin Murphy going all out for Ascot Group 1 Shadwell 'trimming' continues with more than 100 horses catalogued for July sale