Sprinter Sacre, Mick Channon and a sweeping history feature in our round-up 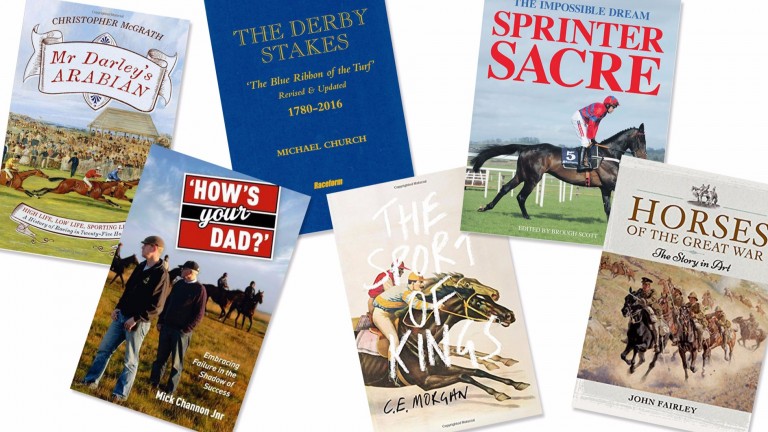 All titles available at shop1.racingpost.com unless otherwise stated

The ups and downs of an unparalleled career are documented by Brough Scott in Sprinter Sacre: The Impossible Dream, using a wide range of material featured in the Racing Post since he made a winning debut in an Ascot bumper in February 2010. Following the horse's recent retirement, there can surely be no more timely souvenir of a lustrous career.

The chaser's story is told in chronological order, including a sign of things to come when he annihilated the opposition on his chasing debut at Doncaster in December 2011, when I was one of the few in attendance; a mistake at the too-small water jump providing a clue as to why this giant gelding had not managed to win the Supreme Novices' Hurdle that March.

There are some fantastic photos, especially those on the two-page spreads, including him soaring over Newbury's open ditch on the way to setting a course record in the 2012 Game Spirit. Less than a month later he was winning the Arkle and, although there were only six runners, the memory-jog of the second, third and fourth being Cue Card, Menorah and Al Ferof is a reminder of just how brilliant he was.

It is evident reading each post-race report that Henderson was becoming more and more nervous every time Sprinter Sacre ran. After a trip to Punchestown in April 2013 that enchanted the Irish racing public, the trainer's worst fears were realised when a hitherto-unseen vulnerability appeared on his return to action in December 2013, as the horse was pulled up by Barry Geraghty at Kempton suffering from atrial fibrillation - a heart problem.

Yet even with Sprinter Sacre not racing in 2014, there were still gripping reports regarding his recuperation, aided by vet Celia Marr and, as the Post's Lambourn correspondent at the time, Rodney Masters had a backstage pass to some of the most significant moments in getting him back on track.

The undoubted highlight of this year's Cheltenham Festival, and probably many more before it, was the confirmation of the renaissance of Sprinter Sacre, now ridden by Nico de Boinville, and the emotional response of the Prestbury Park crowd. Even by Cheltenham's standards this outpouring was something else, and Lee Mottershead and Alastair Down captured the mood beautifully.

Throughout this book sidebar quotes offer interesting insight from other trainers, jockey and racing professionals, while it is entertaining to monitor Geraghty's evolving comparisons for Sprinter Sacre, such as "a Ferrari without brakes", "Concorde" and then "Pele".

In this sport of facts and figures, many quickly learn that the modern thoroughbred stems from one of three Arab stallions: the Darley Arabian, the Byerley Turk and the Godolphin Arabian. In fact, Chris McGrath points out, the Darley Arabian line is now the dominant influence, being represented in 95 per cent of runners the world over, and this is the central premise for his thorough and absorbing history of the turf.

McGrath traces the development of the Darley Arabian line from the progenitor's roots in Syria and importation to England in 1704 down the generations of male-line descendants – 25 of them, right up to modern-day god Frankel – and through their stories he explores not just the development of the thoroughbred, but of the sport itself.

At almost 400 pages, this is a sweeping history of impressive scope. The bibliography alone covers 30 pages, which shows the detailed research undertaken by McGrath. The road is long, punctuated by false starts and lucky turns, before we come to the final four of the 25 – Northern Dancer, Sadler's Wells, Galileo and Frankel. Those names alone are indicative of the illustrious equine company around whom McGrath weaves his narrative.

The academic feel of the work may deter some, but McGrath's eye for a story and eloquent turns of phrase will delight many others. As well as a mastery of racing, McGrath has a sure touch with broader history that takes us from the English Civil War to the trenches of the First World War and across the globe from the diamond mines of South Africa to the Argentinian pampas.

McGrath has a fine grasp of the facts and figures, but so much more besides. He takes evident delight in the many noble and nefarious individuals who populate his story, from kings to brothel-keepers, business magnates to convicts, and brings them colourfully to life. By the end, we can be in no doubt that some of the greatest horses in racing history belonged to shady characters, whether high-born or ill-bred.

The closing chapter is entitled 'I'd be surprised if there's ever been a better horse', quoting Cecil's observation after Frankel's final performance on Champions Day. No, but there have been some incredible stories on the 300-year journey from Syria to that Ascot apogee. 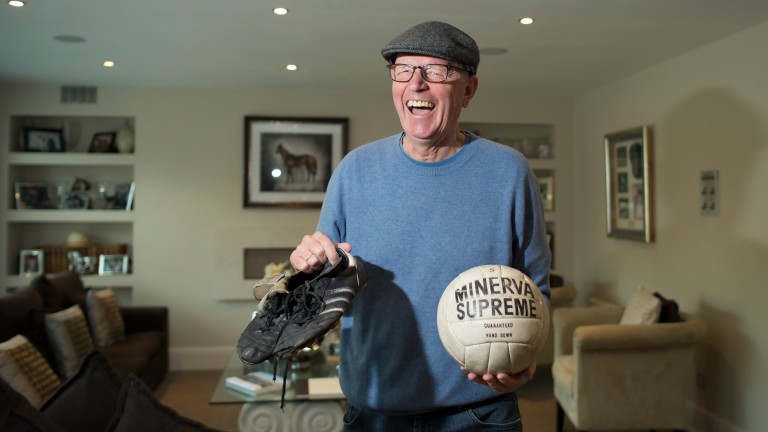 Hard times and humour in shadow of living legend

To anybody whose abiding memories of Mick Channon are of a lavishly-sideburned free spirit with a cheeky grin and a windmill where his arms ought to be, it must come as a surprise to learn that he is, by common consent, "a grumpy old bastard".

And not just any grumpy old bastard. He's a ranter and a raver of Basil Fawlty proportions, has a horse called Needless Shouting named in his honour and a tendency to savage apprentice jockeys. Oh, and he swears a lot.

If you don't like swearing, don't read this book, because without swearing it would be 50 pages shorter, although not half as funny. And it is very funny.

It's poignant, too. A book about Mick Channon by Mick Channon's son has every chance of being a real stinker, packed with third-hand footballing anecdotes passed on shamelessly under the guise of ghost-written biography, but this is a very different animal indeed.

In fact, it's not about Mick Channon very much at all. It has a flavour of Mick Channon (which won't be to everybody's taste) but How's Your Dad? is a book very much about living under the yoke of a famous father's status as a living legend, reaping the rewards but finding the psychological consequences often outweighing the benefits.

But this is no extended bout of maudlin introspection, simply an attempt to put into words what it's like living one step behind a public superhero – "Embracing Failure in the Shadow of Success" as the subtitle goes.

The trouble is, Channon snr has always had a "sparkle" that makes people "willing to go the extra yard to please him". "My life has also fallen under this spell," says Channon jnr, but the recriminations are leavened by a welter of uproarious humour, some of it at old Mick's expense, much of it driving him to even greater heights of rage.

Aintree: The History of the Racecourse by John Pinfold
£30, published by Medina Publishing

Whole shelves of books have been written about Aintree and the Grand National but they have been made redundant by this definitive account, which combines academic rigour with a fluent style and a treasury of illustrations.

John Pinfold established himself as our leading Grand National historian with his 1999 book Gallant Sport, and here he again dispels many myths about the race, notably the identity of the year it was first run. In effect, he has discovered the three earliest Grand Nationals.

The founding father of both Aintree racecourse (in 1829) and the Grand National was William Lynn, a Liverpool hotelier who was once a shadowy figure but is here allowed to take his place in the limelight. The author's original research proves conclusively that the first Grand National was run not in 1839, when Captain Becher fell into the brook and Lottery triumphed, but in 1836. That race, won by Becher on The Duke, "should properly be regarded as the first Grand National as it was run over essentially the same course and distance as today's race".

Mirabel Topham, a former Gaiety Girl and minor actress who married into the family, ruled Aintree for four decades from the mid-1930s with an abrasiveness that made her many enemies. She bought the course from Lord Sefton in 1949, but her plan to sell it in 1964 led to a series of 'last' Grand Nationals and its future was not secured until the Jockey Club bought it in 1983.

Nearly every page contains illustrations in the form of photographs, old prints, maps, paintings, racecards, posters, cartoons and graphs, most of them in colour and published here for the first time. Printed on paper of art-book quality, they are reproduced with razor-sharp clarity.

Most histories of Aintree and the Grand National do little more than regurgitate information from previous books, errors and all. John Pinfold has made full use of archives at Aintree and elsewhere, as well as gaining insights from interviews with major players of the recent past, to set the record straight and produce what may well be the racing book of the year.

The Sport Of Kings by CE Morgan
£9.99 (paperback), published by Fourth Estate – 4thestate.co.uk

Described as the "most daring novel of the year" in a five-star review in The Telegraph, The Sport of Kings has drawn lavish praise from a range of distinguished critics on both sides of the Atlantic as an "audacious fiction that breathes new life into the American canon" (Telegraph again). Heady stuff indeed, and this is indeed heavy stuff; a spiralling tale of wealth and poverty, racism and rage, set across 560 unflinching, densely-written narrow-type pages and several generations of the Forge family, a Kentucky-based dynasty dating back to the state's first settlers.

As its title suggests, CE Morgan's sprawling book ostensibly revolves around horseracing, specifically a star filly named Hellsmouth who runs for the Forges. Through her, the vested interests of three separate lives become intertwined. Henry Forge is an unyielding, damaged patriarch obsessed with selective breeding; his untamable daughter Henrietta questions the central tenets of a skewed belief system. "The anthropologists beat the eugenicists a long time ago," suggests Henrietta. "Supposedly immutable traits are malleable under the forces of environment." Beat that, Jilly Cooper.

The third individual tethered to the progress of Hellsmouth is Allmon Shaughnessy, an ambitious black man who works for the Forges after exiting a life of poverty and Cincinnati drugs gangs via a spell in jail. As such, racing really provides only the backdrop for Morgan's explorations into weightier issues: a KKK-era lynching features early on.

The concept of the Great American Novel casts a long shadow in modern American fiction with any number of self-consciously 'big' books. Although not without flaw, The Sport Of Kings is epic in its scope and magnificently realised.

Michael Church's handsomely produced volumes about the pedigrees of Derby and other Classic winners have themselves become classics in his own lifetime. This latest limited edition updates and condenses previous works published in 1997 and 2006 about the Derby's history and this encyclopaedic yet concise version makes a pair with Church's book last year about the Oaks.

The majority of this book is given over to facts and figures about every renewal, featuring the winners' accomplishments both on the track and at stud, as well as those of their parents, thereby reminding us of now rarely mentioned champions: the unbeaten Ormonde and Bahram; Blandford, the last horse to sire four winners until Montjeu; the mare Horatia, who was 25 when she foaled 1806 winner Paris.

Church's commentaries bring each race alive, especially when spiced with nearly lost episodes such as Harry Wragg's ride on the Aga Khan's Theft, fourth to the same owner's Bahram in 1935. The Epsom stewards were unhappy that Wragg had allowed Bahram's jockey room at a critical stage of the race; evidently controversy over team tactics is nothing new.

While this is not something to be read from cover to cover, there is plenty of entertainment to be had from the numerous illustrations and the variety of Derby-related essays spread throughout. Tony Morris's comment in the 1997 foreword continues to apply: "This book is one to delight all present-day racing enthusiasts and all who relish the heritage of the turf."