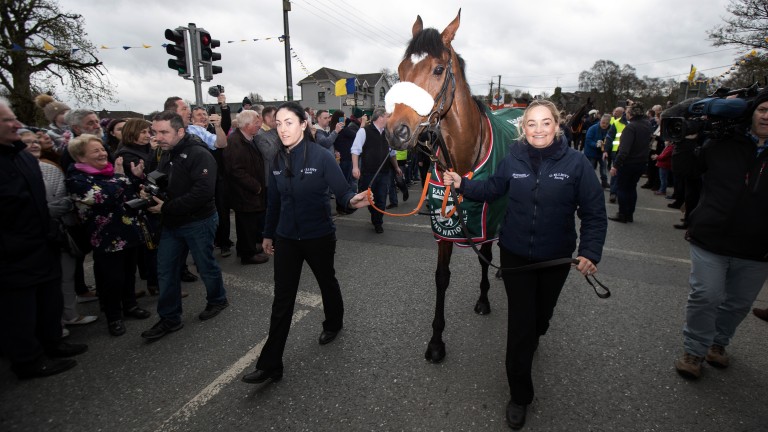 So this is what a Grand National winner looks like. Short, slim and, some might even say, scrawny. There ain't much of him.

Grand National winners are not supposed to look like this. Tiger Roll would never get a modelling gig; pep talks to soldiers the week before a war would be more his thing.

The streets of Summerhill in County Meath have staged something like this before. A little more than two years ago a beautiful brute of an animal paraded up and down the town with hundreds of eyes glued to his gorgeousness. That was 2016 Cheltenham Gold Cup winner Don Cossack. This is Tiger Roll – more gutsy than glamorous, more Roy Keane than Ronaldo. 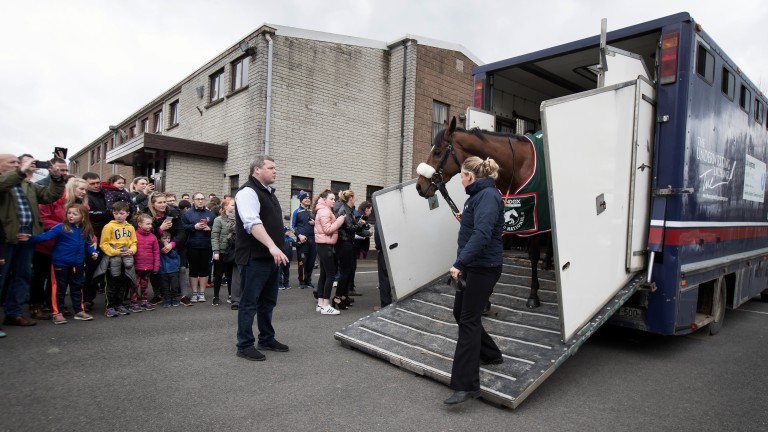 Louise Dunne unloads Grand National winner Tiger Roll at the community centre before parading up the main street of Summerhill
Patrick McCann (racingpost.com/photos)
It has just ticked past 2.35pm on a soggy Sunday when Tiger Roll starts to strut down the street with groom Louise Dunne, who has not stopped smiling since she stopped crying shortly after the photo-finish verdict was called.

Following him is Irish Grand National winner General Principle and Bless The Wings, 11 lengths back in third on Saturday. They must feel like Colin Farrell's mates on a night out. Nobody even notices them.

Tiger Roll looked like he could not move another yard when he stopped to a crawl in the final 100 yards on Saturday, but he's been a busy boy since. A second lap of the village is swiftly followed by a plethora of pictures. He does not bat an eyelid. Maybe he doesn't have the energy.

"He's just amazing," says Dunne. "Everyone goes on about his size, but his size doesn't matter. All that matters is his heart. He's grumpy but very lovable. He's some character. He'd have no problem letting you know if he didn't want you in the stable. He's a quirky fella and you need to know him."

This commotion is all new to Tiger Roll, but not to his trainer. He knows the drill. There are selfies to smile for, hundreds of hands to shake and people to pretend to know. Elliott's home is less than a mile down the road so failure to recognise a face might never be forgiven, no matter how long ago he saw it.

"It's unbelievable," he says while shaking his head. "I think it's only starting to sink in now. To be home here in Summerhill and see so many familiar faces, so many friends and family, is something else. There's a great buzz around the place and I'm sure it will be a long night!" 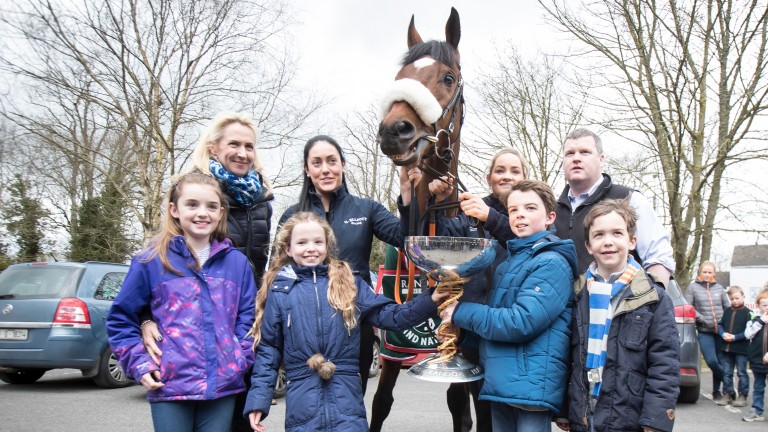 That you can guarantee. Parties have a habit of lasting longer than they should around here. They stay longer than Tiger Roll himself. The pints are already being poured in Swan's pub and it won't be long before Elliott gets his first sip.

He didn't drink a drop the night before; he knew what lay ahead. He knew only too well he would have to reflect on the race hundreds of times. Hangovers don't work at occasions like this.

Time for another recollection, Gordon.

"About 200 yards out I thought he was home and hosed," he begins. "I was sure he was going to hack up. He's only small, though, so four miles and two and a half furlongs was going to be tough on him. In the last 100 yards he hit a brick wall, but thank God the line came in time.

"He's been a super little horse. To win at three Cheltenham Festivals and to come back and win a Grand National is amazing. I'm very proud of him." 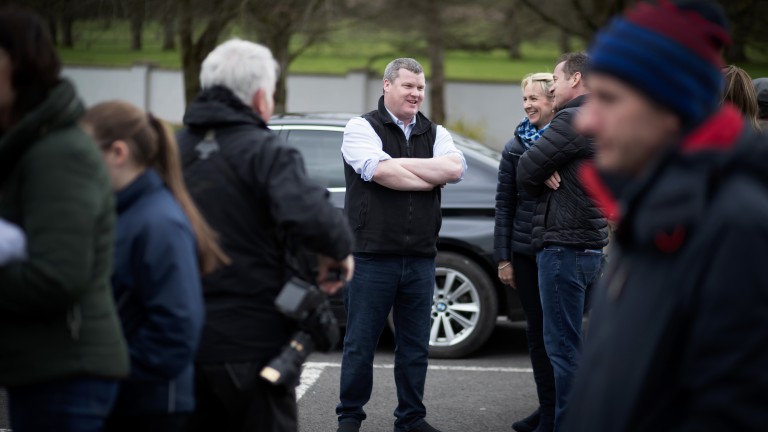 Trainer Gordon Elliott is congratulated by the locals on Tiger Roll's success
Patrick McCann (racingpost.com/photos)
Despite soaring into the air and clenching his fist tightly as the photo-finish result was finally called, surely Elliott knew Tiger Roll had held on?

He replies: "I didn't know, I genuinely didn't. I wasn't sure of the angle at Aintree. I could tell you the angles at the winning line of every track in Ireland, but I'm not too familiar with the ones in England so I really wasn't sure. I was very nervous before the result was called. It was pure relief when it was."

"He's actually a little bit like a tiger," comes the reply. "He can be in great form one day, terrible form the next. He's either very good or very bad, that's just the way he is.

"In fairness, he's allowed to be in bad form whenever he wants because, when he's good, he's very good."

Ollie Smith, from a few miles down the road in Robinstown, was one of the many punters glad he was very good on Saturday. He backed him, but a friend of his fiancee got a much better price than he did.

That fiancee, Sarah Parsons, says: "A friend of mine backed him at 50-1 when the weights came out a few months ago. She only had a euro each-way but certainly got the value."

Elliott was top trainer at Cheltenham last month and has now won the Grand National again, 11 years after Silver Birch. Is the final chapter of a fairytale campaign going to be penned at Punchestown?

"Whatever happens we've had a great season, but if we do win the trainers' title there will be an even bigger party to the one you see here today," says Elliott, daring to dream.

FIRST PUBLISHED 7:49PM, APR 15 2018
Everyone goes on about his size but his size doesn't matter. All that matters is his heart