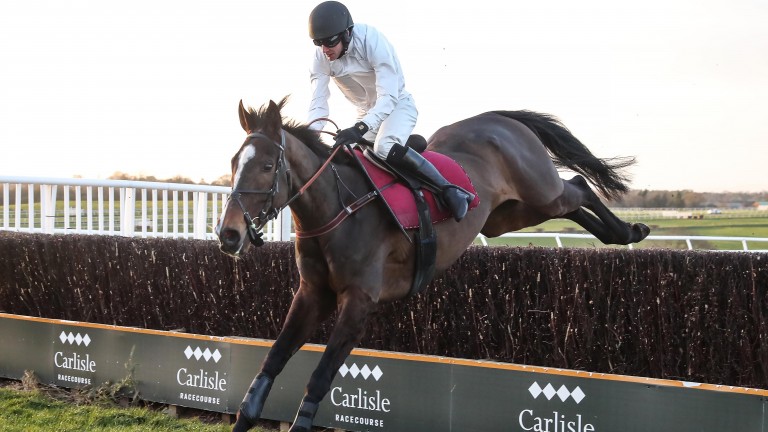 One For Arthur reminded everyone that Tiger Roll is not the only former winner returning to Aintree next month with a tidy schooling session on Sunday.

The 2017 Randox Health Grand National winner could not defend his crown last year as he missed the whole season due to injury and he has unseated his rider in two outings this season, bypassing an intended third prep run at Kelso three weeks ago due to unsuitably quick ground.

One For Arthur (white) schools with a stablemate after racing at Carlisle, as he prepares for the Randox Health Grand National pic.twitter.com/rQwANqe9ZZ

But he will head back to Aintree with a clear round behind him after a circuit of Carlisle under big-race jockey Derek Fox, accompanied by a stablemate in a session after racing.

"He went very right-handed at Haydock last time and we've done a lot of work with him, we've done loads in the school," said trainer Lucinda Russell. "The aim today was to make sure he jumped straight.

"I was very happy with that, I can't wait for two weeks' time. He's in really good form. Erin Walker, his work-rider, said he worked as well as he's ever done yesterday."

One For Arthur is a best-priced 33-1 for Aintree and is guaranteed a place in the line-up, whereas fellow Scottish hope Captain Redbeard, who finished third in that Kelso race, is not certain to make the cut.

After winning the feature chase at Carlisle with Pookie Pekan, trainer Stuart Coltherd said: "Captain Redbeard needs 11 to come out but I think we needed 11 at this stage last year and he got in.

"He was out this morning and he's bouncing. His form is working out okay and if gets a bit of luck, who knows how well he could go."

FIRST PUBLISHED 6:32PM, MAR 24 2019
He's in really good form. Erin Walker, his work rider, said he worked as well as he ever has done yesterday